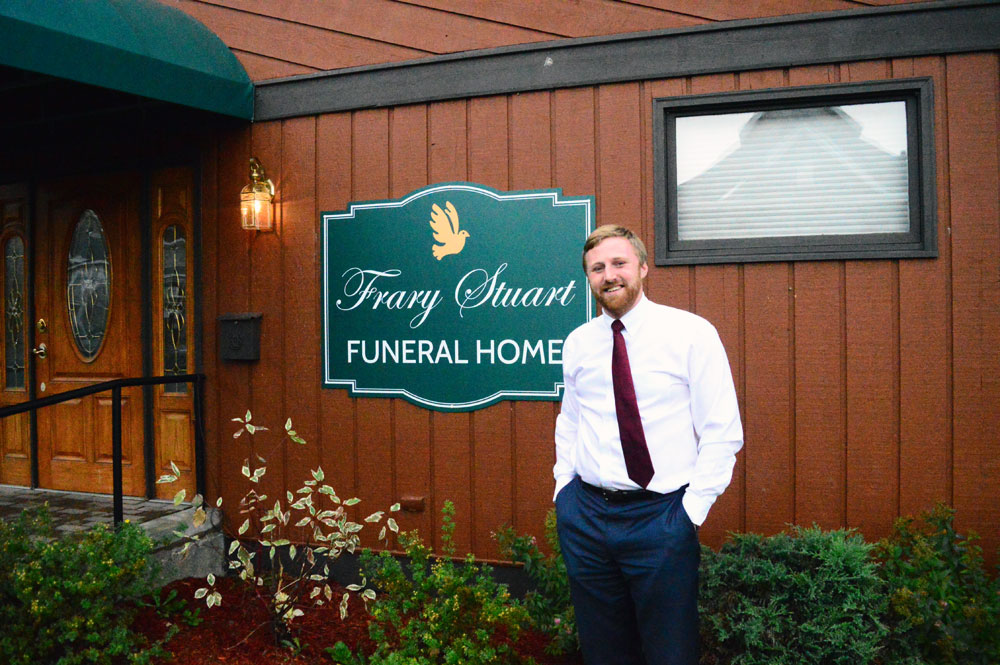 Ryan Frary of Ogdensburg recently purchased the funeral home in Tupper Lake and now runs it as as the Frary-Stuart Funeral Home. (Enterprise photo — Aaron Cerbone)

TUPPER LAKE — Shawn Stuart, the owner and operator of the only funeral home in town, recently passed on the business to Ryan Frary, a 27-year-old licensed funeral director owner who owns funeral homes in Ogdensburg and Harrisville.

The funeral home changed hands at the end of summer, but Stuart, 54, said he has not fully retired from the business. Thus, the Stuart-Fortune-Keough Funeral Home has become the Frary-Stuart Funeral Home. Stuart is still involved in the business part-time and said earlier this month that he and Frary were talking daily.

Stuart has operated the funeral home since 1992 and has been Franklin County’s southern-end coroner on and off since the 1990s. He said he plans to carry out the rest of his coroner term — around one year — but he is unsure if he will run for election again.

Stuart said his wife Joan retired recently, and that he wants time to “move on to new ventures.” Two years ago they became grandparents, and they are expecting their second in early 2020. On a phone call earlier in October, his granddaughter could be heard calling for him in the background.

Stuart said he wants to “do the grandparent thing” as well as travel. This summer he and his wife took a multiple-week cross-country trip to “scratch the itch.”

He said owning a funeral home meant being on call 24/7, always ready to attend to the recently deceased or to talk with the family. He said being a funeral director is a challenging job; there are not many others where customers need answers to life’s biggest questions or help working through grief.

Stuart said at times he would bring his work home with him, physically or mentally.

“I think it wears on you after a while,” Stuart said.

Though it’s a tough job, he said he kept at it because of its positive results.

“I think it’s been very rewarding, helping the families of the North Country, Tupper Lake area through some difficult times,” Stuart said. “I hope I’ve helped some people.”

When Stuart was looking to sell the funeral home, Frary was looking to purchase one to expand his business to a third location. The two had already known each other through Frary’s casket sale business.

“The funeral industry is kind of a small industry,” Stuart said.

Stuart said he had several people approach him to purchase the business but that the Frarys felt like a “good fit” because they were community-focused and come from a small town similar to Tupper Lake.

Frary grew up in Ogdensburg, the youngest of five children, and spent his years working and living around his father’s funeral home. He remembers his family gathering there for holidays and working to clean and prepare the building for services.

Frary said he was always close with his father and in 2018 he took his father’s share of the business, as well as his medical transport and monument businesses.

Stuart also grew up around a funeral home, back when the Tupper Lake home was owned by Clarence Rennell. Stuart was friends with Rennell’s son Mike and remembers digging graves with his friend and hanging out in the funeral home.

Stuart left to join the Coast Guard in 1982 but returned in 1990 with Joan, a Tupper Lake native, to raise their kids. Clarence was looking for someone to hand the business off to, so Stuart got his mortuary degree from North Country Community College and then SUNY Canton and took over.

Frary said he has enjoyed working in Tupper Lake the past two months and that he is prepared to give the job of funeral directing the same 24/7 worth ethic Stuart gave.

He said he needs to be available to talk at any time of the day because, for families, knowledge is comfort. He said when people call him with questions, concerns or quandaries it soothes their minds to understand what he is doing to prepare a funeral for their loved one.

“In this world I serve a purpose, and at the end of the day I want people to remember me as a nice person that helped them out in a tough time,” Frary said. “There’s nothing more satisfying than when somebody comes up to you after a service and you feel like you’ve done something important for them.

“That time, as sad as it is — I don’t know how to say this without sounding kind of insensitive, but you try to make the whole situation a little bit lighter.”

He said that is easier to do when the deceased had lived a full, long life. It is harder when it is a young person.

Stuart mentioned this, too, and said he has seen a rise in funerals for younger people over his years directing in Tupper Lake.

“I seems like in the last 10 or 12 years people are getting younger and younger that are dying,” Stuart said. “Unfortunately, it’s probably the most tragic deaths that really stick out the most.”

Frary said the funeral business is currently made up primarily of people from around the baby boomer generation, and that few young people are getting into the occupation. He is on the younger end of that spectrum. Like Stuart, Frary said it took moving away from the North Country for him to realize he wanted to live here and take up the family business.

He has also hired Jade Kenyon, a recent graduate from SUNY Canton’s Funeral Services Administration program, who moved into Tupper Lake in September to start work at the newest Frary funeral home.