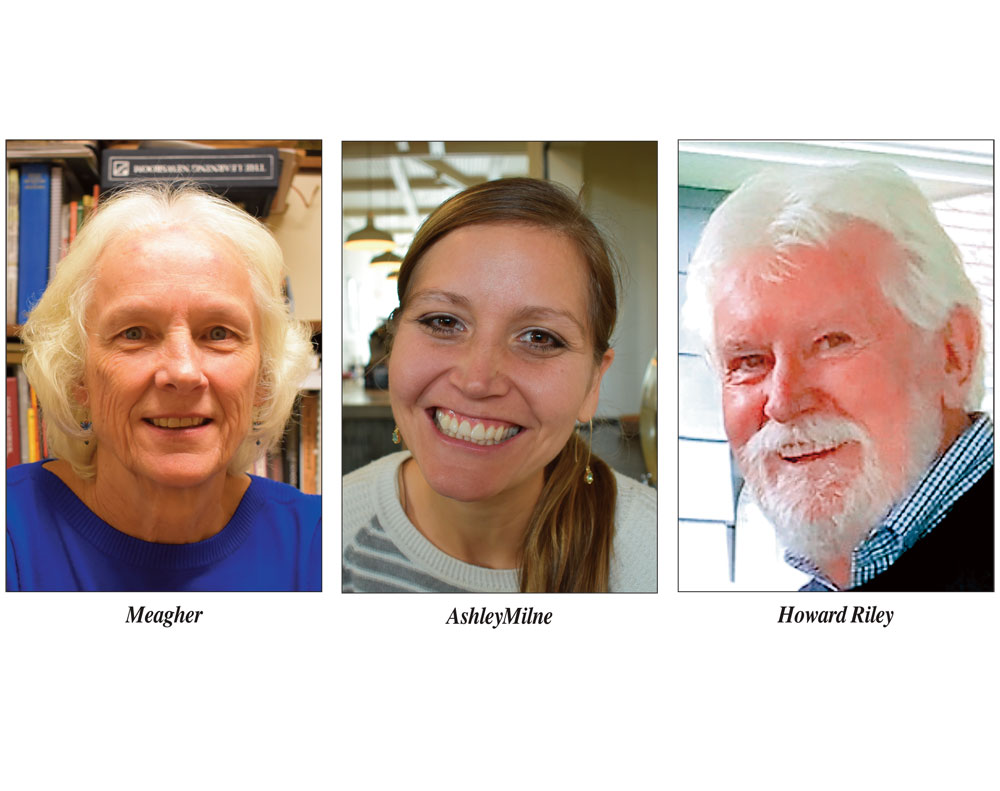 SARANAC LAKE — Two four-year spots on the Harrietstown Town Council are up for election this year with three candidates vying for the positions. The candidates are incumbents Republican Patricia Meagher and Democrat Howard Riley, and newcomer Ashley Milne, who’s been endorsed by both parties.

Meagher, who’s finishing her first term, said she’s running again because she enjoys working with the council and the public.

She said one of her main goals on the council is to maintain a good budget.

“The biggest thing with the town is keeping the budget in check and taxes low and reasonable,” she said. “There are state-imposed tax caps, so we have to deal with that. In my time, there was only one occasion when we exceeded it. Santa Clara pulled out of the fire contract one year, and Harrietstown was saddled with their share of it. We didn’t have any choice of it, so that year went a little over. But, as a rule, we keep it pretty close.”

Meagher said she’d also like to maintain the Adirondack Regional Airport, ensuring it as a viable asset for the town. The airport has three departures a day from Saranac Lake to Boston.

“The airport is always a big issue. In fact, when I ran the first time for council, that was one of the things I was against. I didn’t think it was being handled properly. But then I took a tour and met everyone out there, and now I’m on the other side. I realize it’s a very valuable asset. We do get quite a bit of grant money from the Federal Aviation Administration for maintaining the runways and the buildings. We built a new hangar out there. We also get rental money for planes staying there. It’s a pretty big deal.”

Currently, the airport employs nine full-time workers year-round, and a member of the town highway department works there for part of the year, Airport Manager Cory Hurwitch said. He didn’t have exact numbers for non-town workers, but said that the airport has plenty of members from the State Police, North Country Life Flight, Hertz, Cape Air and Go Aviation working there, too.

“It’s a vital asset to the community, and I think it’s important for any town council member to recognize that,” Hurwitch said.

Meagher retired in 2013 after working for the town for 12 years as its deputy clerk, court clerk and deputy tax collector. She lost a three-way race for two town board seats that same year.

Meagher said she thinks she and Riley and the council work well together. She was Riley’s court clerk when he served as town justice.

“We’ll occasionally have some disagreements but end up meeting in the middle,” she said.

She said she doesn’t know Milne too well but appreciates her being new to the area.

Milne said her family is what motivated her to run for council.

“I have a 3-year-old son and one on the way,” she said. “I love the community of Saranac Lake. We chose to live here so we could raise a family. I want to continue to have it stay a great community.

She said her top priorities are local internet access and the airport.

“We live in a very obscure and rural area and one priority I want to take on is making internet more affordable since we don’t have many options,” she said. “This has been a major debate in the town council — ensuring access to internet because not everyone has it, that’s number one, and number two, keeping it affordable.”

Like Meagher, Milne also wants to ensure the success of the airport.

“Obviously, it’s a major source of income and employment in our community,” she said.

Milne, originally from Blackfoot, Idaho, moved to Saranac Lake a little more than a year ago and has already gotten involved with multiple community organizations.

She currently works as a program coordinator at the Saranac Lake Youth Center and is a member of the Saranac Lake Parks and Trails Advisory Board. She’s also the Saranac Lake Kiwanis Club Director and is a board member for the Adirondack Carousel. From 2015 to 2016, Milne worked as a researcher and policy adviser for a member of the Scottish Parliament. There, she worked in economic development, organizing job fairs and coordinating apprenticeship programs. Before that, she interned in the New York State Assembly in 2006 and on Capitol Hill, Washington D.C. in 2007. She also worked with Connect2Give, an online fundraising platform for nonprofits.

Milne said she likes her opponents.

“I wish I didn’t have to go against them,” she said, “but I think I can add a fresh, new perspective and represent a younger-family demographic.”

Riley, a long-time local politician, is running for re-election because service “gets in your blood,” he said.

“I’ve enjoyed doing public services, and I think I and the board make a difference,” he added.

Riley said his main goal every term as a council member was to “save the taxpayers money and do the right thing.”

Looking forward, Riley said he’d like to stay the course with a lot of the council’s current missions such as maintaining roads, building local advisory groups for community projects and selling lots at the Harrietstown Business Park near the airport, which currently has two tenants — Bionique Testing Laboratories and the Adirondack Arc.

Riley also stressed the importance of the airport.

Riley is a former town justice and a former village mayor, trustee and manager. He also has a column in the Enterprise.

He said he’s liked working on the council with Meagher these past four years.

“She was my justice clerk, so we’ve worked together forever,” he said. “Sometimes we have to agree to disagree, but she’s a very good councilwoman and does her homework.”