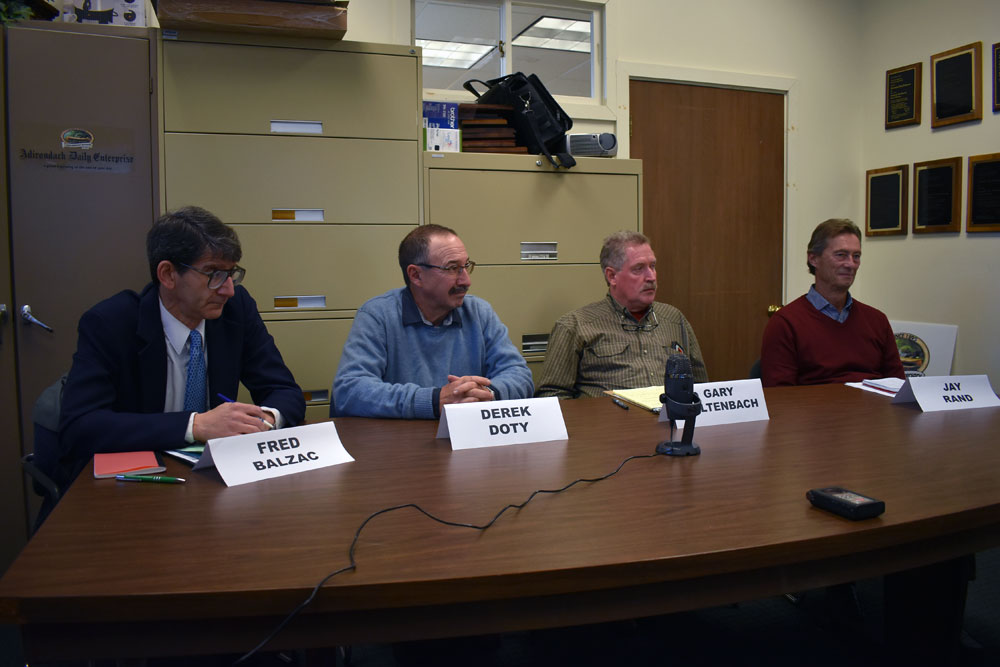 The debate was hosted at the Adirondack Daily Enterprise offices in Saranac Lake and was moderated by Enterprise Managing Editor Peter Crowley. It was streamed live on the Lake Placid News Facebook page, and the full debate is still available to watch there.

This election represents a notable turnover in the town’s leadership. Roby Politi, who has served as supervisor for almost 12 years, leaves office this year. Six candidates, all newcomers, are running to fill two of four town council seats.

This election also has countywide implications. As the town with the largest population density in Essex County, whoever clinches the supervisor seat will have significant pull on the county Board of Supervisors because of its weighted voting system.

Rand believes the law jointly proposed by the town and village boards needs to be adopted soon.

“We need to start somewhere,” he said.

The latest version of that law would require those who rent out their properties to apply for and secure a permit, limit the number of visitors who stay there and ensure there’s adequate off-street parking to serve those visitors. He said the town and village need to balance between restricting rentals’ impacts on neighborhoods, allowing those who use the industry as a way to offset their taxes to continue doing so, with leveling the playing field between hotels and short-term rentals.

Balzac advocated for a blanket moratorium on all new short-term vacation rentals to halt the growth of the industry until the boards can piece together regulations. He said he believes the proposed local law wouldn’t go far enough.

Doty pushed back against Balzac’s moratorium position, citing possible legal ramifications that could prove costly to the town’s taxpayers if that moratorium is challenged in court. Instead, he said short-term rentals need to be registered first, allowing the town to cull the data it needs to make a more informed decision on regulations.

Kaltenbach pointed to what he saw as a discrepancy in the number of regulations that apply to hotels versus short-term rentals. He advocated for a strict approach to controlling the impact of rentals in neighborhoods: If there are cars parked outside of them in no-parking zones, he said, those cars should be towed.

“I was raised on Hillcrest Avenue,” he said. “There are no families left living there.

“We do need some Airbnbs, but they need to be controlled better.”

Affordable housing has long been an issue in Lake Placid, but some longtime locals have contended that the rise of short-term rentals is exacerbating the issue and further diminishing the number of long-term apartments in the area, while pushing up property values, in turn causing homeowners’ taxes to increase.

Kaltenbach said he believes the town should lobby the state legislature to move forward a system where residents can get thousands of dollars knocked off their property’s assessed value while short-term rental owners would see an increase in taxes. When asked how that would work, he said he wasn’t sure, but said the lack of affordable housing in the area is putting pressure on local businesses, many of whom are having trouble finding employees to fill vacancies.

“Everybody is looking for help,” he said. “There’s just not enough people around.”

He also suggested the town could help build housing in Ray Brook, deed-restricted so as to be affordable.

Doty and Rand both pointed to a three-month study being commissioned by the Lake Placid-North Elba Community Development Commission Housing Committee as a starting point.

The study will focus on defining what would be considered “affordable housing” in Lake Placid, what housing stock is currently available to people that fall within that income range, potential gaps in the housing market and how short-term rentals may — or may not — be affecting the local housing market.

“We can’t pick a direction until we know the facts,” Doty said.

He said the town has an opportunity with recently acquiring the old Lake Placid hospital property for a new housing development.

But “nothing will work without subsidies,” he said. He pointed to a proposed 2% increase in the county’s occupancy tax as a possible new revenue driver that could generate money for a housing fund.

Rand said short-term rental registration fees are another revenue generator that could be funneled into an affordable housing fund, and there are some opportunities for the town to take over foreclosed properties in the tax auction and convert them into housing developments.

Balzac said he believes Lake Placid is becoming overdeveloped and that any developer who wants to build new luxury housing accommodations could be required to build affordable housing, too.

He also said the town should look at rent control.

“I think that would help a lot of people currently renting,” he said.

On their approach to budgeting, Doty and Rand aligned behind the existing system, which allows department heads to kick off the budgeting process with suggested projects and priorities before the board works on shaping the final budget. Kaltenbach said he’d like to see a system where departments are allowed to retain surplus revenue for next year’s budget rather than the excess funding rolling back into the town’s general fund. By doing this, departments would be incentivized to spend less, he said. Balzac said he would approach the town’s budget as a “newbie” but with a sense of thrift and an eye toward waste, fraud and abuse.

On what they would prioritize as the town’s representative on the Essex County Board of Supervisors, candidates again varied.

Doty underscored his dedication to leading the way on environmental issues at the county level. He wants to explore bringing scrapped plans for a biodigester back into the mix. In 2017, the town board rejected a plan for a biodigester to convert food waste into energy after finding out costs would run over budget. Doty thinks new revenue from a proposed 2% increase in the county’s occupancy tax could make the project financially feasible.

Rand said he believes the county should play a greater role in accommodating the influx of hiker traffic.

“I don’t know exactly what the solution is, but it was kind of a mess on weekends. I know Keene Valley worked very hard to accommodate all of the hikers. But it’s extremely important. We get thousands of people that come,” he said. “We really need some good control there.”

Balzac said he wants to see county government “reformed.” He wants to shift the current weighted-vote system for the Board of Supervisors to a “freeholder system.” He said this freeholder system would see seven to nine candidates elected for full-time, at-large positions not representing specific parts of the county. He also wants to see an elected county executive position put in place.

He added that the current system is very “Lake Placid centric,” and he thinks the smaller towns in Essex County should have a bigger say in decisions.

Kaltenbach, on the other hand, said he believes North Elba should be getting more from the county than it’s getting right now.

“We’re the largest coffer pouring money in,” he said. “It doesn’t seem that we get the proper funding back. Our roads in North Elba are terrible, and our infrastructure is falling apart, something that the county should be taken care of and isn’t getting done.”

“The facilities right now, if they weren’t attended to, would be in a Second World state,” he said.

He said he knows from experience that expenses at these venues are “astronomical” — he described getting a monthly electrical bill for $400,000 at the Whiteface Mountain ski Center many years ago — but that the “spin-off effect” that the venues have on the overall economy of Lake Placid offset is important.

“I think ORDA has been very successful in that respect,” he said.

Kaltenbach agreed the economic impact of the area’s Olympic facilities is important, but he said the town should have a bigger influence on what happens within ORDA.

Doty said he would also look to increase the town’s involvement with ORDA — including the business side of the agency — and he’d like to see more transparency. He also wants to update the leases with ORDA for the venues the town owns.

Balzac said he’s skeptical about ORDA’s improvement plans and that the community should have more say in the decisions ORDA makes.

Beyond the primary issues, candidates pointed to a number of other things they would want to focus on if elected.

Kaltenbach expressed concerns about the Lake Placid Central School District’s decreased enrollment numbers with only 24 students in Kindergarten at the start of the school year. He said he believes more affordable housing will improve that.

Balzac said he would advocate for “everyone who is struggling. He said more open space should be preserved and local farms growing food should be better supported.

Rand underscored the importance of having adequate parking and smooth traffic flow on Main Street and protecting Mirror Lake from road salt. He highlighted the town-owned airport as an ongoing project, pointed to the installation of a new sidewalk around Mirror Lake as a project he wants to see come to fruition; and said he believes the town may want to explore having the state take possession of Adirondack Loj Road.