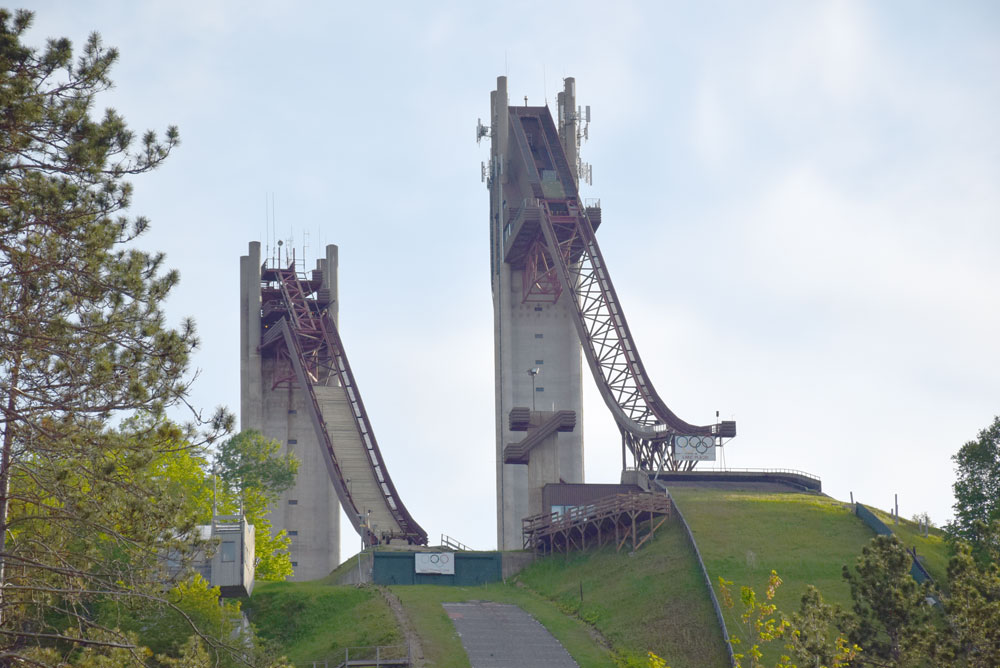 Work at the ski jumps in Lake Placid is ongoing, with the taller 120-meter jump stripped of its ramp decking, as seen in June. (Enterprise photo — Justin A. Levine)

The contract was awarded to G.W. Tatro Construction, of Jeffersonville, Vermont, for $475,000, according to ORDA board documents.

Board member Arthur Lussi balked at the figure on Monday and asked how it could cost that much to complete the project.

“We expect that it will be less,” CEO Michael Pratt said, noting that the figure was calculated based on “worst-case scenarios” and estimated unit pricing.

ORDA expects this part of the upgrades at the Olympic Jumping Complex to be mostly complete by Nov. 1, according to the contract terms agreed to by the board. G.W. Tatro Construction was chosen following a request for bids in the New York State Contract Reporter posted on June 10. The authority determined the construction company’s proposal was the “lowest responsible bid.”

After receiving a single bid from a construction company in June vying to regrade the bigger landing hills at the jumping complex, the authority ultimately decided to defer going out to bid again on the project until the next construction cycle.

Construction at the Olympic Jumping Complex kicked off in April. Upgrades were set to include the installation of refrigerated frost rail systems on the 90- and 120-meter jump inruns as well as the installation of a new gondola, a glass-enclosed elevator and recreational zip lines.

The work is being funded by a $80 million state capital infusion into ORDA in the latest state budget, plus $60 million the year before. ORDA officials hope to use the money in part to prepare aging 1980 Olympic facilities in the area to facilitate the 2023 Winter World University Games, or the Winter Universiade, which is expected to draw 2,500 student-athletes and delegates to the region. Local officials have said the main reason they bid for the Universiade was to give a reason to upgrade the 1980 Olympic venues.

Upgrades at the cross-country skiing and biathlon facilities at Mount Van Hoevenberg are also underway in preparation for the games, as well as upgrades to the Lake Placid Olympic Center and the three state ski areas ORDA runs: Whiteface, Belleayre and Gore.