You know it, you love it, you can make it yourself: It’s a pumpkin latte. (Photo provided — Yvona Fast)

Gordy Sheer, director of marketing and sponsorship for USA Luge, looks on Oct. 18 at a space at the back of the facility where more infrastructure is set to be installed. (Enterprise photo — Elizabeth Izzo)

The view of the Rooster Comb trailhead parking lot in Keene Valley the Saturday before Columbus Day weekend from a footbridge that leads to the trail. (Enterprise photo — Elizabeth Izzo)

A pull-off parking area near a trailhead in Keene Valley was packed on the Saturday before Columbus Day weekend. (Enterprise photo — Elizabeth Izzo)

Forest rangers carry an injured hiker out of the woods in August. (Provided photo — state Department of Environmental Conservation) 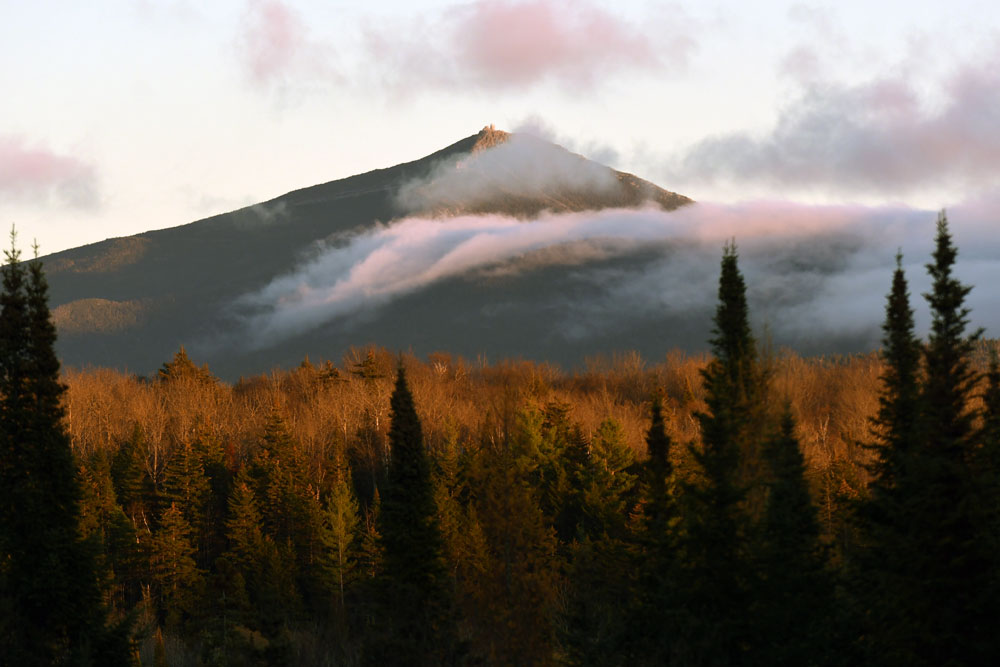 KEENE VALLEY — The steady stream of hiker traffic through this hamlet has slowed to a trickle as the colored fall leaves drop to the ground. But efforts to accommodate the rising tide of tourists, while protecting the natural landscape, aren’t losing steam.

Local leaders and the Adirondack Park’s environmental advocates are already planning for the next hiking season.

In the town of Keene, lawmakers continue to discuss options that would allow the municipality to shore up more revenue to better hiker services next year, while shielding taxpayers from footing the bill and maintaining a strong, welcoming community feel. How to accomplish those goals has emerged as a major campaign issue in a time when five candidates are running for two seats on the Keene Town Council. Ideas floated by both elected officials and candidates include expanding the Marcy Field parking lot and imposing a parking fee in addition to the existing Garden shuttle fee.

And though it hasn’t emerged as a major campaign issue in North Elba, at least two candidates — Republican Jay Rand, a candidate for town supervisor; and Democrat Bob Rafferty, a candidate for town council — have cited finding overuse solutions or pushing the county to take a larger role in addressing hiker overcrowding impacts as a priority if elected. 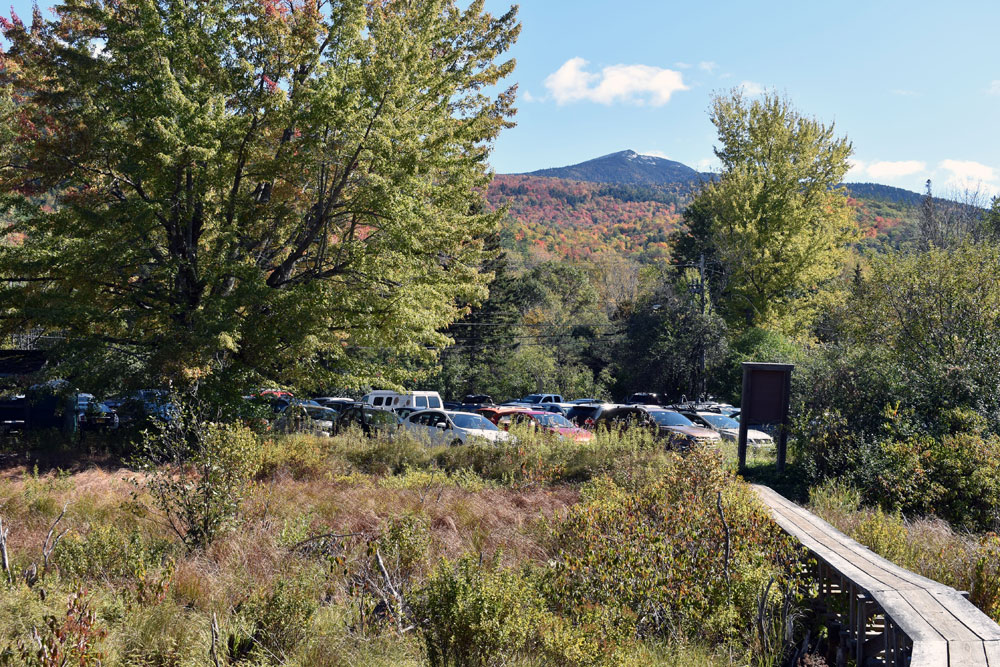 The view of the Rooster Comb trailhead parking lot in Keene Valley the Saturday before Columbus Day weekend from a footbridge that leads to the trail. (Enterprise photo — Elizabeth Izzo)

And in a joint news release from Adirondack Wild, the Adirondack Council, Protect the Adirondacks and the Adirondack Mountain Club, the Park’s four biggest green groups issued a joint request to the governor for more funding to manage Forest Preserve lands.

They asked that when Cuomo puts together his 2020-21 Executive Budget, he expand funding for the state Department of Environmental Conservation, allowing the department to increase its number of forest rangers and other staff; as well as fully fund, staff and implement a comprehensive plan that would include expanded visitor outreach and hiker education, front- and backcountry infrastructure and capacity studies that would include wildland monitoring.

The organizations also asked the governor to commit funding for an “experimental permit reservation or limited entry system to limit use at some of the most overused, degraded locations, allow natural resources to recover and ensure a better wilderness experience.”

“The next state budget is being drafted now, so there is no time to waste,” Adirondack Wild Managing Partner David Gibson said in a statement. “Stewardship of the High Peaks Wilderness and other wildlands should be a very high priority for this year’s state budget.”

This newspaper asked the DEC if it is discussing any new solutions to address overuse, particularly in the High Peaks; if the roadside parking ban along a section of Route 73 would remain in effect next year and if the department is considering expanding that ban; and whether the department had commissioned the transit study of Route 73 announced by DEC Region 5 Director Robert Stegemann earlier this summer. In response, a department spokesperson listed 10 initiatives the department has either already put in place or those that are ongoing. 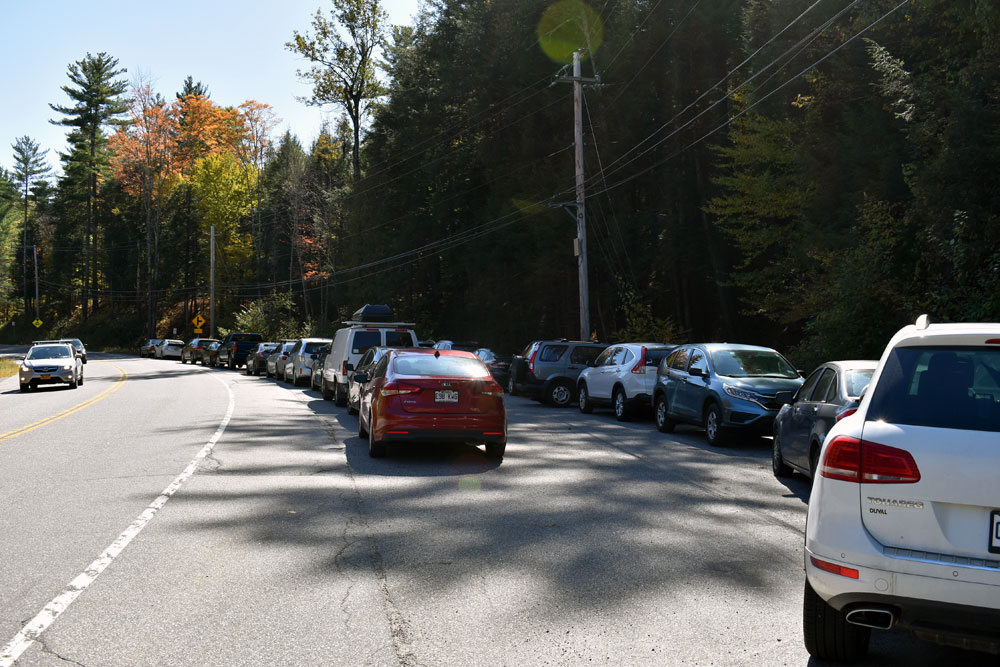 A pull-off parking area near a trailhead in Keene Valley was packed on the Saturday before Columbus Day weekend. (Enterprise photo — Elizabeth Izzo)

“DEC is undertaking a comprehensive effort to promote sustainable tourism in the Adirondack Park by working with all partners to advance solutions and projects that both improve user experiences and minimize impacts to the Park,” DEC spokesperson Erica Ringewald said. “Degradation of natural resources, increased rescues and roadside safety are just a few of the issues associated with the increase in visitors to the High Peaks and other areas in the state that DEC is working to address.”

Among the solutions and projects Ringewald referenced were the roadside parking ban, a pilot hiker shuttle that transported visitors from Lake Placid to trailheads between the village and Whiteface Mountain, the ongoing construction of a new trail at the Olympic Sports Complex at Mount Van Hoevenberg and ongoing hiker education efforts through social media and newsletters. She did not mention any plans for additional bus routes, more parking or a permit system.

“For some time, DEC has been working closely with the hiking community, local governments, environmental organizations, and tourism offices, and others with a vested interest in the High Peaks,” she said. “We welcome constructive feedback from interested stakeholders as we adaptively manage our efforts to address increased visitation to the amazing outdoor recreation opportunities in the High Peaks region.” 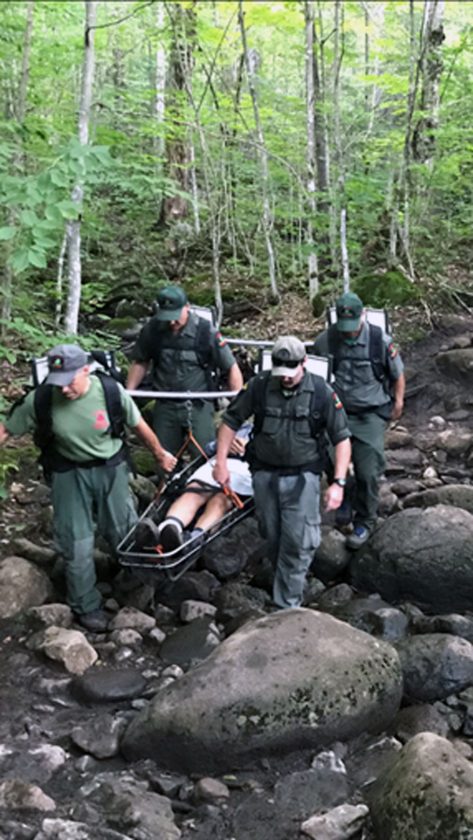 Forest rangers carry an injured hiker out of the woods in August. (Provided photo — state Department of Environmental Conservation)