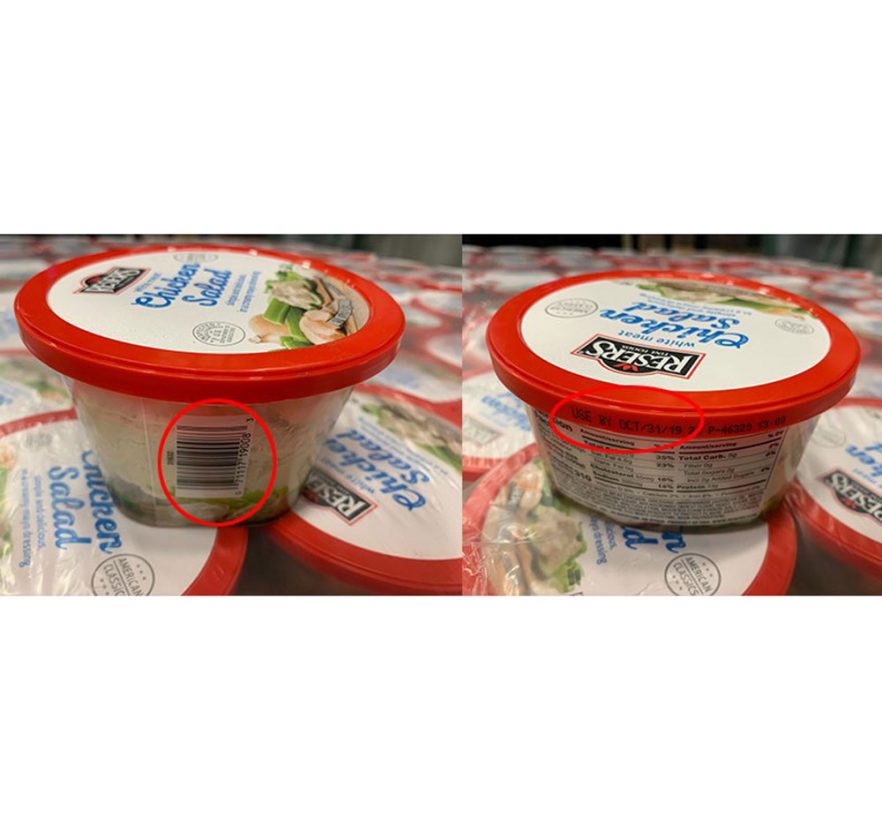 These pictures of recalled Reser’s chicken salad, with the expiration date and UPC numbers circled, show what to look for when buying. (Provided photo — Reser’s Fine Foods)

TUPPER LAKE — A chicken salad sold at the Save-A-Lot grocery store has been recalled for containing a dangerous listeria germ, but the local store supervisors said they have had the product off the shelves since last Thursday.

The product, 12-ounce containers of Reser’s Chicken Salad, with “use by” dates of Sept. 30 to Oct. 31, 2019, are the only products affected by the recall. Save-A-Lot is taking refunds for chicken salads between those dates.

Listeria monocytogenes is a germ that can cause a serious, life-threatening illness called listeriosis.

Shift Supervisor Debbie Pelletier from the Tupper Lake store location said when they received the notification on Oct. 3, employees pulled the chicken salads from the shelves and put a sign on the door warning people who may have bought the product. They urge anyone who has purchased a Reser’s Chicken Salad to return it for a refund. Pelletier said there has been one return so far.

“They are actually on our back table and they’re getting sent back,” Pelletier said.

She said the store does not keep a large stock of the chicken salad in the first place.

She also said the ham and seafood salads from Reser’s are not recalled, as it was the chicken supplier that reported finding listeria.

Reser’s is a brand sold in other grocery stores, too.

Listeriosis and what to do

According to the U.S. Centers for Disease Control and Prevention, listeriosis can cause fever and diarrhea, but invasive listeriosis, meaning the bacteria has spread beyond the gut, is more dangerous.

People with weakened immune systems, the young, the old and pregnant women all have a higher risk of serious infection from listeria. Infection can result in severe headaches, high fever, abdominal pain, nausea, stiffness and diarrhea. It can cause miscarriages and still births among pregnant women. It can sometimes be fatal.

The CDC said symptoms are usually reported one to four weeks after eating food contaminated with listeria, but that can range from as late as 70 days after exposure or as early as the same day of exposure.

“There have been no confirmed reports of adverse reactions due to consumption of these products,” a Reser’s press release states.

People with questions are urged to call Reser’s Help Line at 888-257-7913, and anyone concerned about illness should contact a health care provider.