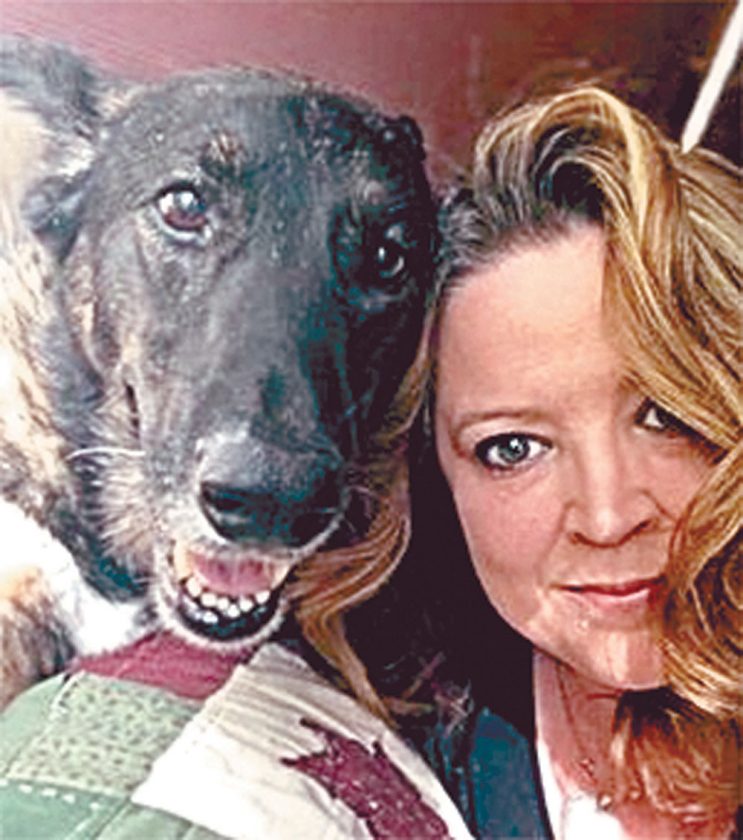 Her 12-year-old, three-legged German shepherd named Sadie had been missing for more than three weeks, and the Lake George resident and friends had responded to numerous sightings of the dog in woods off Coolidge Hill Road in Diamond Point, to no avail.

Briggs and a legion of helpers had set up trail cameras that captured numerous pictures of her beloved Sadie in the woods, but the dog would not take food that was being used as bait in Havahart traps.

But after a series of good sightings, trail cam photos and near-misses, Briggs loaded up the trap with bacon cheeseburger the night of Sept. 26 in hopes that the aromatic meat would entice her canine companion to come into the trap.

At 1:53 the morning of Sept. 26, Sandford-Briggs’ phone rang. It was the owner of the property where the trap was located, awakened by the noise of barking dogs, telling her that Sadie was in the trap.

Sandford-Briggs rushed the 6 miles or so from her house to Coolidge Hill Road, but at first couldn’t see Sadie inside. When she realized her dog was inside the trap, it was clear Sadie was scared and apparently didn’t recognize her.

“She was the most pathetic-looking sight,” she said.

After a few minutes of Sandford-Briggs holding her hand out so Sadie could smell her, the dog started crying. She was brought home in the trap, and once inside the house, began crying again and snuggling with Sandford-Briggs. Within 20 minutes, she was in a dead sleep on a bed.

Sadie lost 20 pounds during her 25 days in the woods, but in the weeks since has recovered and settled back in with the family’s three other dogs.

She escaped from a friend of Sandford-Briggs’ who was watching her for Labor Day weekend while Sandford-Briggs was out of town. Once in the woods, her wild canine instincts kicked in, and she quickly became feral, despite her disabilities. (She lost a leg when abused down south, before Sandford-Briggs adopted her from a local shelter.) Somehow, despite missing her front left leg and having vision problems, she was able to avoid predators such as coyotes and bobcats in the rural, sparsely populated area 6 miles from home, between Bolton Landing and Diamond Point, where she scratched out an existence.

“She lost as much sleep as I did,” Sandford-Briggs said.

For weeks, Sandford-Briggs tried everything she could think of – ground searches with volunteers, even sleeping near the areas where sightings had been reported with her car door open – hoping Sadie would pick up her scent and come to her.

Sandford-Briggs said many people helped along the way, after seeing posts about the search on Facebook and the website lostmydoggy.com. Fliers that someone posted around Diamond Point, miles from where Sadie escaped, led to a resident of the area reporting a sighting.

Someone she doesn’t know paid $1,200 to bring a dog tracker to the area from Rhode Island to help.

“The lady (whose woods Sadie was tracked to) basically let me set up camp in her backyard,” Sandford-Briggs said.

Even though the effort was exhausting – three-plus weeks of running between home and the area being searched, checking cameras and traps for her Sadie – Sandford-Briggs said she never gave up hope.

“She had everything against her, three legs, cataracts. It’s crazy she made it,” Sandford-Briggs said. “But I didn’t get discouraged. I was never ready to give up.”