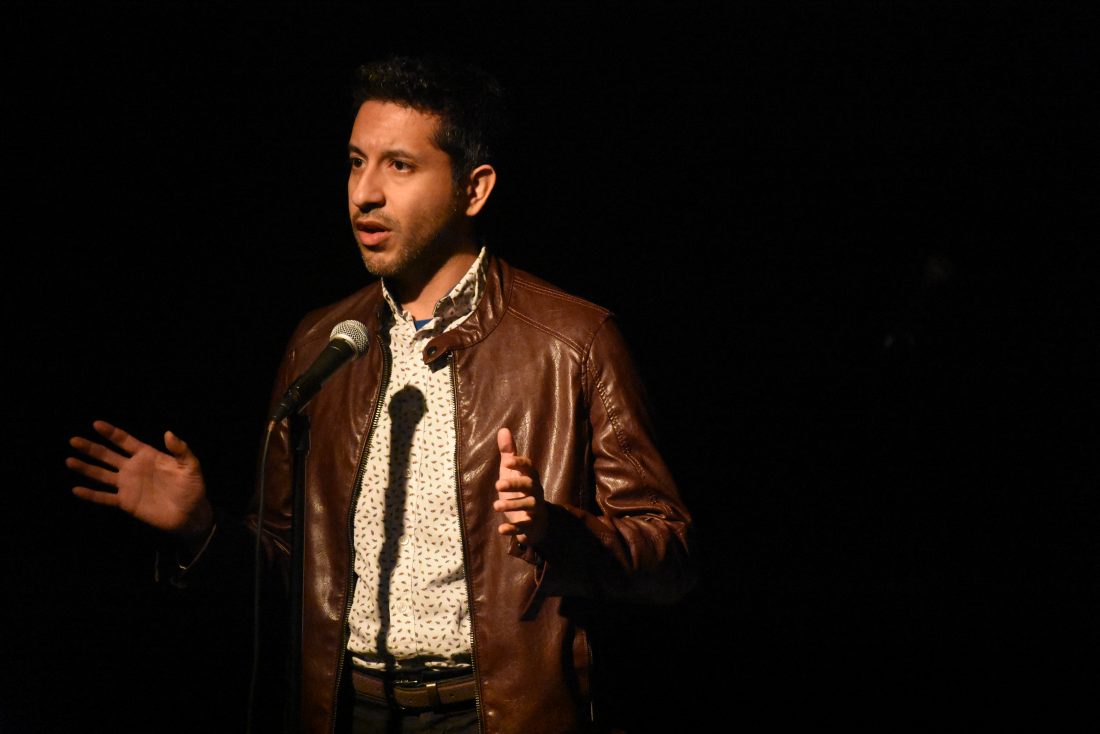 Moises Serrano speaks at Pendragon Theatre in Saranac Lake this week after a screening of “Forbidden: Undocumented and Queer in Rural America,” a film in which he is the subject. (Enterprise photo — Griffin Kelly)

SARANAC LAKE — Moises Serrano grew up a gay, poor, undocumented immigrant from Mexico. He’s had rats shoved in his mailbox and white crosses thrown on his front lawn. His family members often don’t drive around town or sometimes even leave their trailer homes for fear of being stopped by authorities and possibly deported.

However, his story is not unique.

Countless people face the same struggles every day, he said to a few dozen audience members at Pendragon Theatre after a screening of “Forbidden: Undocumented and Queer in Rural America,” a film in which he is the subject.

The event was organized by the Adirondack Voters for Change, a grass-roots, issues-based organization promoting progressive change and citizen engagement in the political process.

When he was only 18 months old, Serrano’s parents fled Mexico, trekking many days through the desert without food or water. Immigrant smugglers would occasionally drug Serrano with sleeping pills to keep him from crying. After reaching “the land of opportunity,” Serrano’s parents found the U.S. to be quite the opposite. Sure, they got jobs on farms, picking strawberries and tobaccos, but basic aspects of American such as getting a driver’s license, going to the doctor and attending higher education were almost impossible.

“I always knew I was gay as much as I always knew I was undocumented,” he said in an interview after the screening. “The point is growing up, you don’t know what kind of consequences those will bring to your life — the homophobia and the xenophobia.”

Serrano said he never intended to be a spokesperson for gays and undocumented immigrants, but it has worked out well ever since he started advocating for the Development, Relief, and Education for Alien Minors Act in 2010.

Even though it sounds counterintuitive, Serrano said one of the key ways he’s managed to stay in the U.S. for so long, was coming out as undocumented — administrations don’t want to deal with a media fallout, he said.

“The federal administration and Immigration and Custom Enforcement to this day keep repeating, ‘We’re only going after criminals,'” he said. “But that’s actually not what we’ve seen. That’s why people come out, because as soon as someone is out with their story and they’re undocumented and being persecuted, we can say (to the administration), ‘You’re lying.'”

After the opening, “Forbidden” goes on to show how the Obama administration is comparable to the current.

However, he does think the political rhetoric is drastically different between the two administrations.

“The Trump administration has been a lot more vocal in their rhetoric, and that’s something the Obama administration at least tried to measure. They were never, at least, outright anti-immigrant in the media.”

During the Q&A, Serrano asked for a show of hands of how many people have heard U.S. immigration laws and system are broken. The majority of audience members raised their hands.

“What if I told you that is a lie?” he said. “It’s not broken. It’s actually working perfectly the way it was set up to. It was set up to exclude people we deem racially and ethnically inferior.”

He brought up the Chinese Exclusion Act of 1882, and the Gentleman’s Agreement of 1907, which banned all Japanese migrants from entering the U.S.

“This isn’t a new issue,” he continued. “This is a cycle. And we need to break the cycle and learn from our mistakes.

“We need to stop presuming the innocence of our laws.”

At one point during the Q&A, Fred Balzac, one of the organizers of the event and a Saranac Lake resident, asked what could U.S. citizens do to help undocumented immigrants and those in the LGBTQ community other than contacting Congress representatives.

“Talk to churches. Find out where the local immigrant community is here. Address their needs. There’s a huge need in North Carolina for free or reduced-cost legal services. ‘Know your rights’ trainings are really necessary. But it can also look as simple as driving to someone’s home and giving them groceries if they’re scared of driving without a license. Unfortunately, our legislators can’t (always) help us, but we can help each other.”