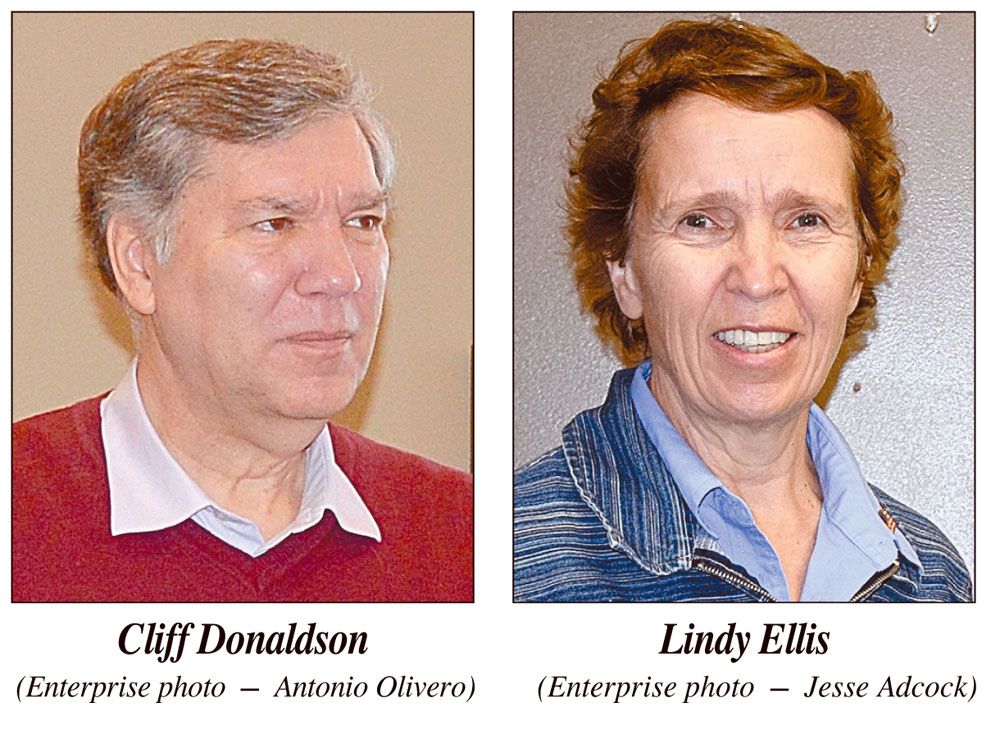 SARANAC LAKE — With Election Day coming up, one of the bigger races in this area is for the Franklin County legislator representing District 7. It sees Democratic incumbent Melinda “Lindy” Ellis of Saranac Lake being challenged by Cliff Donaldson of Lake Clear and the Common Sense Party, who held the position for 13 years in the 1980s and ’90s and was a longtime Democrat.

They are running for a three-year term. District 7 contains the towns of Harrietstown and Franklin.

Donaldson said he didn’t want to comment on his opponent other than to say, “My experience in government is far more extensive than hers.”

Ellis also had only a few words to share about her opponent: “Donaldson was a legislator 30 years ago.

“Cliff has done a great service for the community in the past, and I thank him for that.”

“I think I have a strong voice and influence in Malone,” she said. “I find that I work well with the legislature.”

Donaldson and Ellis both said they are focused on highway maintenance and road improvements.

“County roads are in terrible condition down here,” Donaldson said. “The entire infrastructure is in need of repair.”

“Franklin County has 266 miles of county roads, so it’s critical we invest in the repair of those roads,” Ellis said. “County Route 60 (from Gabriels to Onchiota) recently had 3 miles repaved, but there’s still more to do.”

Both cited Old Lake Colby Road by the Adirondack Medical Center and the stretch of county Route 55 from Gabriels to Bloomingdale as specific examples of roads that need repaving.

Town of Franklin Highway Superintendent Jacques Demars said his town has had a fairly good working relationship with the county but agrees roads could be better.

“I say we’ve been neglected for years,” he said. “No question about it.”

He, too, mentioned Old Lake Colby Road and county routes 55 and 60 as top concerns.

“People around here pay high taxes, and I think they get very little in return,” Craig said.

Some of Donaldson’s priorities

Aside from roads, Donaldson said he wants to focus on opioid addiction and concerns with North Country Community College’s Saranac Lake campus.

Donaldson said a legal front is not the best tactic against opioids and that efforts should be focused more on education and mental health services.

“As soon as you get one dealer off the streets, you get another in their place,” Donaldson said. “The best way to approach it is through a prevention program. We need to have people going into our schools and teaching kids while they’re young.”

County Community Services Director Suzanne Lavigne said addiction and mental health are some of the major health issues in the county today. She said private services such as St. Joseph’s Addiction Treatment and Recovery Centers provide good assistance and do a fair bit of outreach, but could use more funding from the county.

“It’s the after-high-school youths and older adults that need better education,” she said. “Being able to engage people is services is critical.”

Donaldson said NCCC’s Saranac Lake campus has often been a neglected asset in the community. He said county spending on capital improvements and new course offerings should be revisited.

“NCCC is probably one of the most important economic drivers in the southern part of Franklin County and the northern part of Essex County,” he said. “We don’t want the college to become so outdated that it can’t attract students. The students and faculty provide a great deal in terms of sales and property taxes for this area.”

Donaldson said he would also like to see online police and fire training classes offered at the college so local officers and volunteers don’t have to travel far for required courses. Currently, the school does offer emergency medical service training.

In an emailed statement, NCCC President Joe Keegan wrote, “We appreciate Cliff’s recognition of the importance of the College to the Saranac Lake community and his years of supporting our efforts when he was a Franklin County legislator. In regards to the delay of capital improvements, there is widespread recognition by the College and our county sponsors that our Saranac Lake campus is in need of capital improvements. The legislators and supervisors have also recognized the vital role of the College in our communities and have been quite engaged with and supportive of the College’s efforts.”

Ellis said constituent service and the environment would be some of her main focuses if reelected.

Constituent service can sound a little broad, but it focuses more on finding solutions to specific requests rather than tackling a big issue, she said. One example Ellis referenced was from last fall after people at the Saranac Lake Youth Center brought up concerns of unsafe crosswalks along Church Street. Ellis worked with the state Department of Transportation to repaint multiple crosswalks and provide more visible and reflective signage.

“Our youth center has so many young adults crossing from Woodruff toward Nori’s (a cafe and grocery store across the street), and we’ve also got some adults who may not walk so well,” she said. “Being able to have a protected area is really important.”

Youth Center Executive Director Aleacia Landon said the crosswalks and new signage has made a difference.

“It’s an incredibly busy intersection,” she said. “You’ve got young sixth-graders crossing the street, and they might not be paying attention and vehicles don’t slow down. It can be dangerous, especially in the winter.

“It has been a really big help since they redid the crosswalks,” she continued. “People have been slowing down a lot more.”

Not just in the North Country but anywhere with heavy snow and ice, communities are starting to take notice of the negative effects of road salt. Salt melts snow and ice quickly and is inexpensive, but it also has the potential to pollute waterways, harm animals and contaminate drinking water in wells.

Ellis said she thinks local governments are doing a pretty good job of not relying on salt; however, state DOT plow trucks drop 100% salt on state highways. The department has been working on a few pilot salt-reduction programs such as one that stretched from Lake Placid to Wilmington on state Route 86 in Essex County. Ellis said she’d like a state reduction program for Franklin County, too.

“I believe the Adirondacks should be used as an evaluation site for reducing road salt,” she said. “The consequences are such that some water supplies are getting to become undrinkable. This is not a short-term fix, but we need to re-calibrate our expectations. We want safety while driving but also not pollute our waters.”

Environmental research groups such as the Adirondack Watershed Institute at Paul Smith’s College and the AuSable River Association often cite road salt as one of the major threats to waterways.

Ellis was appointed to the legislator seat in June 2018 to succeed Barbara Rice, who left for a job with the governor’s office. Ellis then defeated Republican Jim Murnane in the election that November for the one year left in Rice’s term.

She is chair of the county board’s Public Safety Committee, which oversees the district attorney, probation, public defender, sheriff and jail, emergency preparedness, Stop DWI and Traffic Stop, conflict defender and assigned council coordinator. She has previously led the Finance Committee and has served on the Economic Development Committee and Public Works and Services Committee.

After graduating from Stevens Institute of Technology in New Jersey with a degree in metallurgical engineering, she spent 40 years with Corning Inc., eventually rising to management within the manufacturing company. She and her husband left the company and resettled in Saranac Lake 10 years ago, although she said they owned their house for longer than that and had been coming to the Adirondacks as winter visitors since 1981. They run a tandem bicycle business, Gear-to-Go Tandems.

Donaldson, a former school teacher born and raised in Lake Clear, has had an extensive career in politics and civil service for the past 38 years, including a 13-year stint as a Franklin County legislator from 1981 to 1994.

He later served as Essex County’s manager from 1996 to 2008, overseeing hundreds of public employees.

He ran unsuccessfully for an Assembly seat in 1984, losing to incumbent Republican Andrew Ryan. He ran again in 2002 but dropped out that August after learning the Hatch Act may prevent him from being a state lawmaker and Essex County manager at the same time.

He was elected to a two-year term on the Saranac Lake Village Board of Trustees from 1997 to 1999, including a short stint as deputy mayor.

He was a member of the Saranac Lake Central School District board from 2003 to 2008, serving as board president for the 2004-05 school year.

In 1999 he was appointed to the board of the New York State Association of Counties and eventually became president, but in 2005 he was suspended and later resigned from the position after he publicly endorsed a union proposal for Medicaid funding changes, contradicting the NYSAC board position.

Donaldson has also been on the state Olympic Regional Development Authority’s board of directors since 1998.

Both Donaldson and Ellis have family members who work in local government. Ellis’s husband Shapiro is a Saranac Lake trustee. Donaldson’s cousin Craig Donaldson is the superintendent of highways for Harrietstown. Also, Donaldson’s son Aaron was recently hired a deputy in the Franklin County Sheriff’s Office.

Ellis said she hasn’t experienced an occasion where she would have to recuse herself from a county board decision, but she would if necessary. Donaldson said he’d send a letter to the state comptroller requesting a formal opinion before casting any vote that could involve a conflict of interest.

Both candidates have approached the election in a more personal manner, focusing on door-to-door campaigning throughout the summer. The two started putting up signs only at the start of this month.

“I prefer the personal contact in the earlier months,” Donaldson said. “Signs started going up (Monday). I wanted us to be close enough to Election Day before we started with signs. In the middle of summer, there are too many things to do, and the weather is so nice that people don’t focus on campaigns. Hopefully, now they’re getting tuned in.”

“Being able to connect with people is a real positive advantage,” Ellis said. “It’s a pleasure to meet people, and I appreciate their openness.”

The Enterprise has received and published 20 letters to the editor supporting Ellis since the beginning of September. Letters for Donaldson started coming in this month, with three published so far.