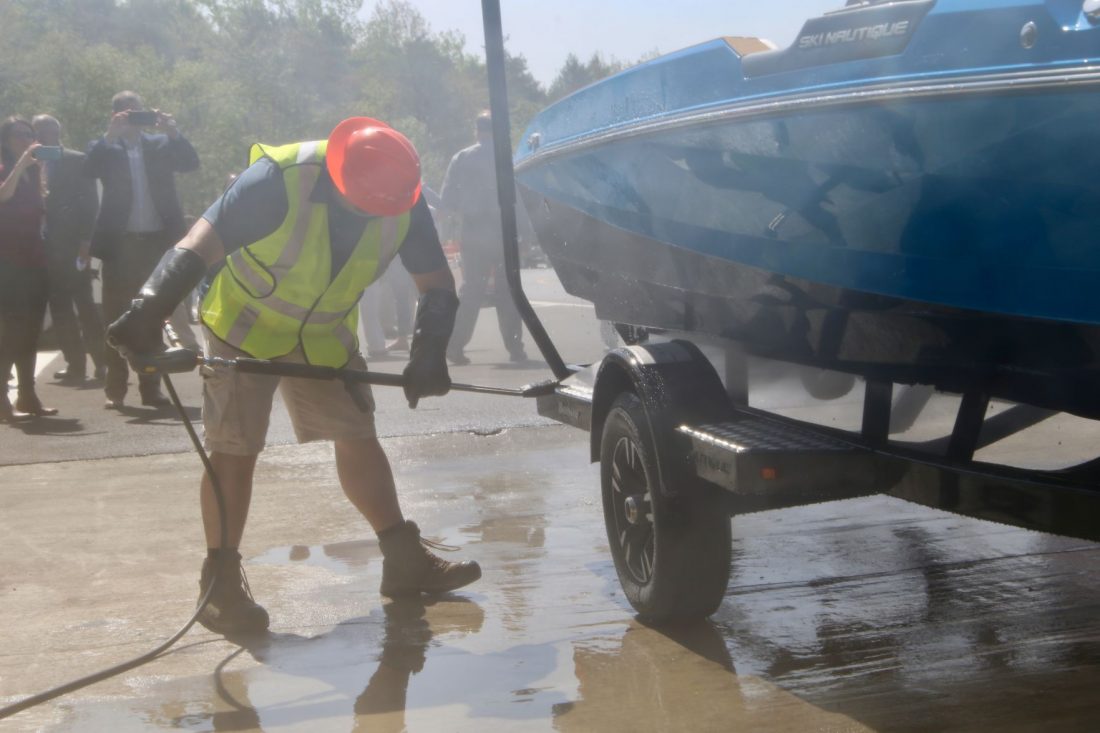 Jeff Sann with the Adirondack Watershed Institute’s Stewardship Program, based at Paul Smith’s College, demonstrates washing a boat in May during the opening of the Adirondack Welcome Center’s boat washing and inspection station in Queensbury. (Provided photo — Gwendolyn Craig, The Post-Star)

Sexual harassment of stewards at boat inspection stations in the Adirondack Park is a persistent and frequent problem, said staff at the Adirondack Watershed Institute.

Eric Paul, assistant director of the institute’s stewardship program, listed it as one of the challenges the program faces, in a presentation on Monday to a national invasive species conference in Saratoga Springs.

“This is a major concern in our more remote locations as safety for our staff is paramount,” Paul said.

Numerous reports of crude comments, stares and other uncomfortable interactions led the institute, which is a branch of Paul Smith’s College, to create its own sexual harassment training specifically directed to boat launch stewards working with the public.

It has since been shared not only with boat inspection programs across the state, but across the country, including Maine, New Hampshire, New Jersey and Wisconsin.

In 2019, the program employed 133 stewards at 56 boat launches on 41 water bodies. There are eight roadside locations, too, including the new inspection and decontamination station off of Exit 18 in Queensbury.

O’Reilly said more than half of the stewards are college-age students. While harassment typically occurs to young female employees, the institute has seen every scenario, she added.

“People just assume it’s all the 19-year-old college girls,” O’Reilly said. “It has happened to literally every category of people in our program. We’re very careful to keep the training applicable to everybody.”

The kinds of harassment that have been reported so far aren’t usually at the level to alert police, O’Reilly added. Most of the encounters involve insinuating comments or “elevator eyes,” where a person is looked up and down.

A boater once commented to a steward, as she was on her knees washing down his boat, “Hey, I’ve got some other work you could do on your knees,” O’Reilly said.

Other boaters may make excessive compliments on a steward’s appearance, or describe a sexual fantasy to a male boat steward about his female colleague.

O’Reilly and Paul said they are not aware of any instances of sexual assault or physical interactions, but O’Reilly said it is possible that some stewards may not feel comfortable reporting that.

Paul fears it could happen.

“We do have people in remote locations, and it’s a big park, and we do work across a large geography,” Paul said. “If we do this program long enough, who knows? I certainly hope not.”

But both Paul and O’Reilly said various incidents have been reported at all of their launches, even the busiest ones.

What is being done

The Adirondack Watershed Institute’s sexual harassment training is one way it hopes to empower employees.

O’Reilly said she and Paul created it because they were both boat launch stewards and witnessed or experienced harassment firsthand. As they worked their way up the program to management positions, O’Reilly said they wanted to improve training to stewards.

“We know what it was like to be on a launch, and you’re all by yourself, and someone comes by and puts the hair up on the back of your neck,” O’Reilly said.

The focus of the training, O’Reilly said, is to educate stewards about trauma, and how people react to it. Oftentimes when people are harassed, they’re caught off guard and may not react in a way they wish they had.

The institute used popular singer Taylor Swift as an example in its training. David Mueller, a DJ, grabbed Swift’s butt during a meet-and-greet in 2017, but her first reaction was to ignore it and say to him, “Thanks for coming.”

O’Reilly uses this as an example of how a victim’s control is taken away and a victim may freeze or not know what to do in the moment.

The institute also keeps a “creepy people” log, where stewards are asked to keep track of interactions that make them feel uncomfortable. It doesn’t necessarily specify boaters’ identities, O’Reilly said, but it keeps track of what was said or done and when.

The institute is also encouraging stewards to feel safe in reporting those uncomfortable interactions. Paul isn’t sure if that openness is the reason for what he sees as an increase in incidents over the last several years, or if harassment is increasing.

While the institute is an equal opportunity employer, it does require stewards have their own car, in part so they can escape the inspection station, if needed.

Each location, too, has a specific list of nearby “safe places,” that stewards can go if they need to leave. O’Reilly said they encourage stewards to leave the launch first before calling their supervisor.

Supervisors also check on the stewards, and some stations are checked more often to make sure everyone is safe.

The institute contracts with the state Department of Environmental Conservation to run the boat inspection stations.

O’Reilly said the DEC has provided radios at some of the remote locations where there is no cellphone service, so stewards can call for help if needed.

The DEC, in an email to The Post-Star, said any harassment is unacceptable, and it works closely with boat steward services “to help employees remain safe and ensure they are equipped with the skills needed to properly handle those situations.”

It provides a list of local law enforcement contacts, and at some launches, stewards are teamed up, the DEC added.

O’Reilly said she has presented the Adirondack Watershed Institute’s training to other state steward program managers, too.

“Anything we can do to help make people feel safer,” she said.