All rise for the judge election 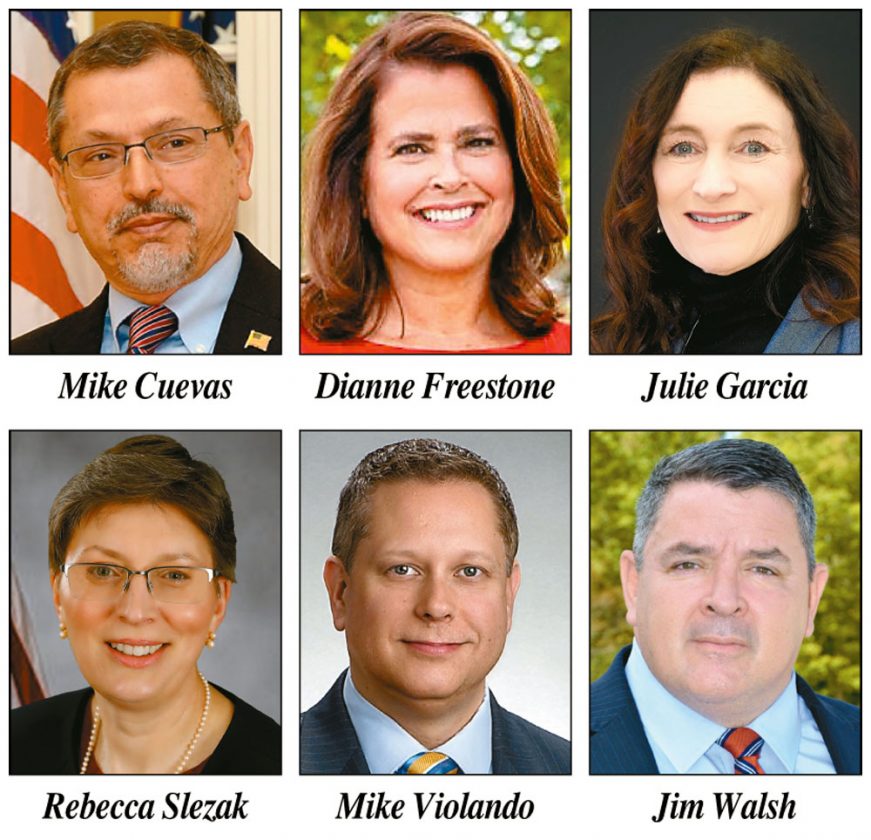 Four seats in the state Supreme Court Fourth District, which covers much of the North Country and Central New York, are up for election this year, and six attorneys are pleading their cases to be elected to the bench.

Of the 13 judge seats in the district, two are already vacant and two more are turning 70 years old, so they will be “aged out” at the end of the year.

Though the ballots on Nov. 5 (or Oct. 26 through Nov. 3 if you vote early) will say to “vote for four” candidates, voters can also vote for one, two or three candidates and have their ballot still count — just not more than four.

Two are running on the Democratic line, four have made both the Republican and Conservative lines, and one of those is also running as a Libertarian.

Every single one of these candidates graduated from Albany Law School.

All candidates said their reason for running for the office stems from their desire to help people and belief that they can do that to greater effect from the bench. They each have held varied positions in the law on all sides and in many courts, and all have been in court thousands of times.

Due to judge campaign restrictions candidates cannot say much in interviews about policy or politics. They have to focus more on who they are and what they’ve done.

Mike Cuevas grew up watching courtroom dramas on television, which was the spark for his interest in law. Now he’s got 40 years of experience and a nickname among his friends fit for prime time: “Ice Man.”

This is what he thinks would make him a good judge, his cool demeanor.

He started down his law path in junior high school at the suggestion of his grandmother. While studying at New York University he realized he wanted to change the court system from the inside out.

“From that point back then, the more I looked at it — particularly as an undergraduate — I saw that the system could use improvement,” Cuevas said.

He thinks he’s been successful in doing that.

When he started at the state Unemployment Insurance Appeals Board in 1998, he was tasked by the governor with keeping the board compliant with a federal consent order it was under because of past violations of litigants’ due process rights. He said he grew attentive to details with this job.

“When you’re in a situation like that, you really become cognizant of each type of question, each kind of response … how they handle witnesses and documents, so that hearings are truly fair,” Cuevas said. “That’s just become ingrained in (me).”

Cuevas said he believes being a state justice will allow him to make even more changes.

Of the six candidates, Garcia is the only one living in the Adirondacks (Warrensburg), and with three women currently on the 11-member Fourth District bench she wants to be the fourth.

In Essex County, Garcia became the first female district attorney in 2005. She lost reelection in 2010 to current DA Kristy Sprague and opened her own practice.

She said she has 20 years of experience “in the trenches” of the law that she wants to put it to work. More important than those 20 years as a lawyer, she said, are the experiences she had in her life before law.

“I think that your background is just as important as your education,” Garcia said. “Even though a judge’s robe is black, my collar will always be blue.”

She said she worked a “hard hat and steel-toed boots” job at International Paper and worked as a waitress and bartender through college.

Garcia’s life has been shaped by her family, younger and older. She grew up in Witherbee watching her grandfather, who immigrated from Spain, rise early to head to work in the iron ore mines in Moriah.

In 2001 she moved back to upstate New York to help her sister get addiction treatment after their mother had died from a similar cause. A few months later Garcia suddenly became a single mother. Her sister had died, and Garcia took custody of two of her three small children.

“It is one of the best experiences of my life,” Garcia said of raising the two girls.

Garcia said she always wanted to help people and believes that the judge’s seat is a good way to do that.

Jim Walsh talks a lot about what is “fair.” As far as he is concerned, one of the chief goals of the court is to determine what is fair and see that it is carried out.

“You got to be fair. That’s the biggest thing I come back to,” Walsh said. “Everything I have done in my career, it’s instilled in me a sense of fairness.”

At SUNY Brockport he pivoted from physics to criminal justice, then joined the Navy. He said as a Navy intelligence officer he gained the skills a judge needs.

He said he works to get through the emotions of a case and find the facts.

“People come into court, and generally its not on their best day,” Walsh said.

Sometimes, though, he said the court is not the best way to get a result. He is focused on the law and said he is not concerned with personal, frivolous or emotional arguments.

His goal as a justice, he said, would be to listen to people’s problems and disagreements, determine what the law says, get them a decision expeditiously and get them back to their lives.

Mike Violando has spend his whole career at one law firm, where he has been a partner since 2002.

Still, he said he has worked in a wide range of courts and seen many judges, but he has not always liked what he’s seen.

“I saw too many judges I thought were not doing what they should be doing on the bench,” Violando said. “There are too many judges who have an agenda, political or otherwise.”

He didn’t decide to run for the position until he had a dramatic shift in his life several years ago.

In 2010 Violando was in a car accident in which he hurt his back. During his time in the hospital, he also found out he had a rare form of kidney cancer.

“I went from one battle to the next and frankly didn’t think I was going to survive,” Violando said. “It really made me reevaluate everything in my life. It kind of brought me back to why I became a lawyer in the first place, and that was to help people.”

He ran for the state Supreme Court in 2016 but lost then to Mark Powers. He said he wants people to vote for him because he believes judges should be fair and should not be political. He’s believed this from when he first knew he wanted to be a lawyer in high school.

“I’ve always been drawn to law,” Violando said, “basically because I think I like the idea of balance.”

Dianne Freestone has known she wanted to be a lawyer since learning about the three branches of government in seventh-grade social studies. Though Sandra Day O’Connor beat her to her goal of being the first woman to sit on the U.S. Supreme Court in 1981, she has still maintained a goal in the back of her mind to one day become a judge.

“As a practicing attorney I can influence only so many people,” Freestone said. “I always thought as a judge I would have the ability to have a wider influence for good.”

Freestone has practiced law for 33 years, spending a good portion of that in matrimonial law. She believes this experience has given her the skills to work as a judge, including patience, listening and mediating conflicting parties during emotional turbulence.

“I have not only been a counselor at law, but oftentimes I think my clients feel like I am an actual counselor,” Freestone said.

“It was eye opening,” Freestone said. “It is astounding to me how things happen sometimes.”

Freestone said she remembers her first trial and how afterward the judge gave her some words of encouragement and advice. She enjoyed that mentorship and she said she hopes to do be able to do that for others in the future.

“It just kind of presented itself as a once-in-a-lifetime opportunity,” Slezak said. “When that opportunity comes along, you can’t say no.”

Slezak said she has worked in Family Court for 16 years and always thought she’d run for the county-level Family Court judgeship, but she believes she has the experience and skills necessary for the state Supreme Court.

She has worked in many kinds of courts, representing clients and the public, as well as inside the court system as a Montgomery County associate court attorney.

She said a good deal of a judge’s job is writing and researching to determine the real issue of the case, what she calls the “nut” of the issue.

“(You have to be able to) parse through both sides’ arguments to see what are the actual facts,” Slezak said.

She said rulings need to be timely, too.

“The worst thing for a case is to let it linger,” Slezak said.

She said through research and sifting through the arguments, a judge can find the facts and keep personal opinion out of the court, which she said does not always happen.

“In the climate of the country right now you can see a lot of people feel that cases and judges are not necessarily applying the law the way it should be,” she said. “I think as a judge you have to apply the law as it is written. Your personal opinions don’t necessarily play in.”

(Correction: An earlier version of this article got Julie Garcia’s first name wrong, accidentally referring to her as Julia. The Enterprise regrets the error.)