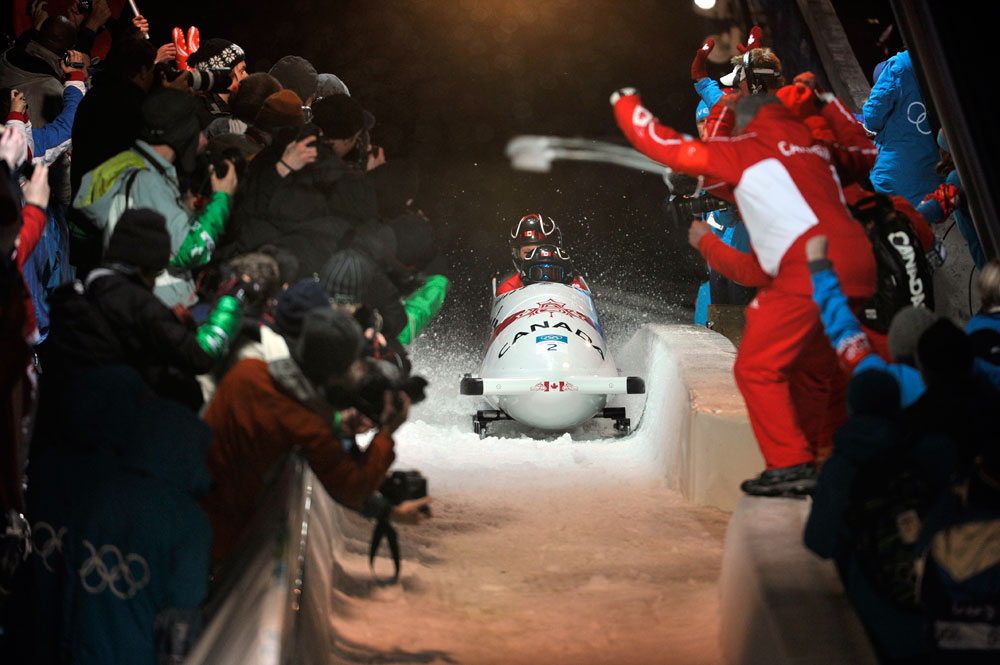 The cheering is exuberant as Canadian bobsledders Kaillie Humphries and Heather Moyse finish to win gold medals for their country in the Vancouver 2010 Winter Olympics in Whistler, British Columbia. (Enterprise photo — Lou Reuter)

Kaillie Humphries, a two-time Olympic bobsled gold medalist for Canada and one of the top drivers in her sport’s history, is planning to race for the U.S. this coming season and beyond — including at the 2022 Beijing Olympics.

Humphries has been seeking her release from Canada for several weeks, and she has filed suit against Bobsleigh Canada in an effort to expedite that release. She is marrying former U.S. men’s bobsledder Travis Armbruster on Saturday, and that would allow her to represent the U.S. in competition — provided she is released by Canada.

Humphries is expected to compete in next week’s U.S. push championships as a guest.

“We look forward to working with Kaillie once she gets her release from Bobsleigh Canada,” USA Bobsled and Skeleton said in a statement provided early Friday to The Associated Press. “Kaillie is a tremendous competitor and has had the respect and admiration of USABS athletes and staff for many years.”

Humphries has been estranged from the Canadian bobsled program for more than a year after filing harassment and abuse claims. She did not race last season and hasn’t competed in a major international race since winning a bronze medal at the 2018 Pyeongchang Olympics.

“They have not provided me a safe place to come back to compete,” Humphries said in an email.

USA Bobsled and Skeleton has told Humphries — a two-time world champion and four-time overall World Cup champion — that it would welcome her to the team. Humphries is very close with U.S. women’s bobsledder Elana Meyers Taylor; they are the only three-time Olympic medalists in women’s bobsled history. And the team’s home track in Lake Placid, New York, has long been a special place to Humphries, since that’s where she learned to drive a bobsled in 2006.

Adding Humphries would obviously be a major boost to the U.S. roster. The U.S. women’s program has been one of the best in the world for nearly two decades, but lost Olympic veteran pilot Jamie Greubel Poser to retirement in 2018 and didn’t enjoy its usual level of overall success last season. U.S. women won six medals in World Cup competition last winter, with Meyers Taylor claiming all of them from her pilot seat.

There is an urgency to Humphries’ quest for the release. Under international rules she would need it by Sept. 30 to be able to compete for the U.S. this season, though it’s always possible that could be appealed. The U.S. team is scheduled to begin training on ice in early October, weather permitting.

Humphries has been one of the most dominant women in bobsledding. She was the Olympic gold medalist in 2010 and 2014, and took third at last year’s Pyeongchang Games. She’s a winner of 22 World Cup races in her career, going back to 2009, with three of those wins coming in Lake Placid.