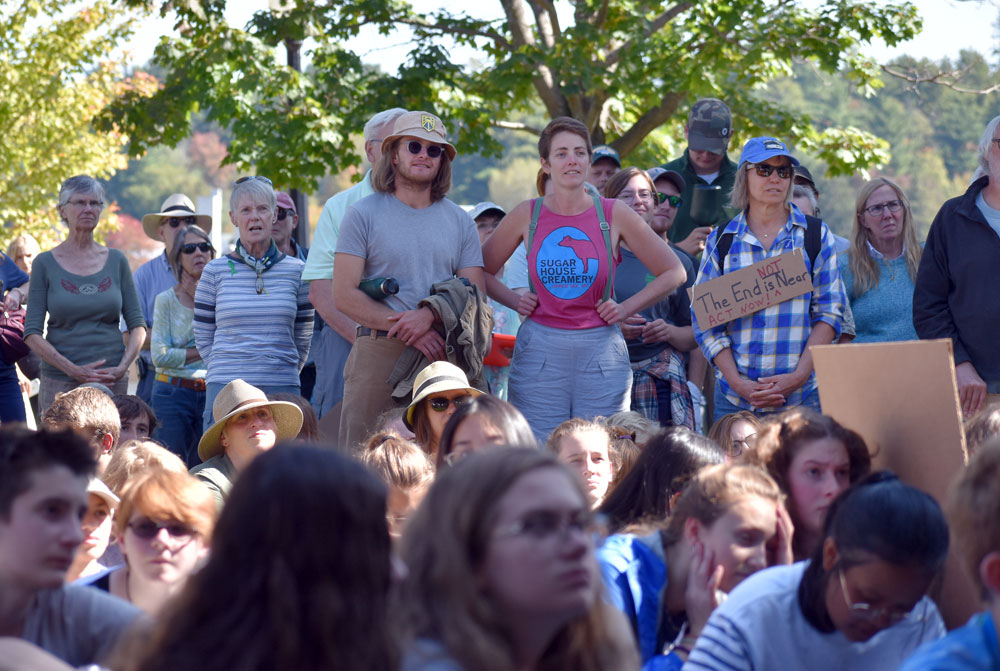 SARANAC LAKE — Speakers at a youth-led rally decried certain politicians, saw hope in the mass of support at the strike and worried about the immensity of the global problem.

Around 400 participated in the protest Friday afternoon in Riverside Park, which had been organized by Saranac Lake High School student Leena Keal and was associated with the Global Climate Strike happening worldwide.

The event started at noon, although the speakers began at 1 p.m. Around 100 were already on the green at the first strike of noon. Adults stood in groups. Children hung around in circles. The sun beat down on a sea of brown, green, blue and purple shirts. People with clipboards asked those not yet registered to register to vote. Signs were held high as the crowd waited, listening to several renditions of “Imagine” by John Lennon on the speakers.

Barbara Curtis of Saranac Lake held an American flag over her head. She said she’d participated in rallies since President Donald Trump had been elected. She said “progressives and liberals need to take the flag back.”

Asked why the rally was important, she said, “It’s important that we know that there’s other people who think like us.” 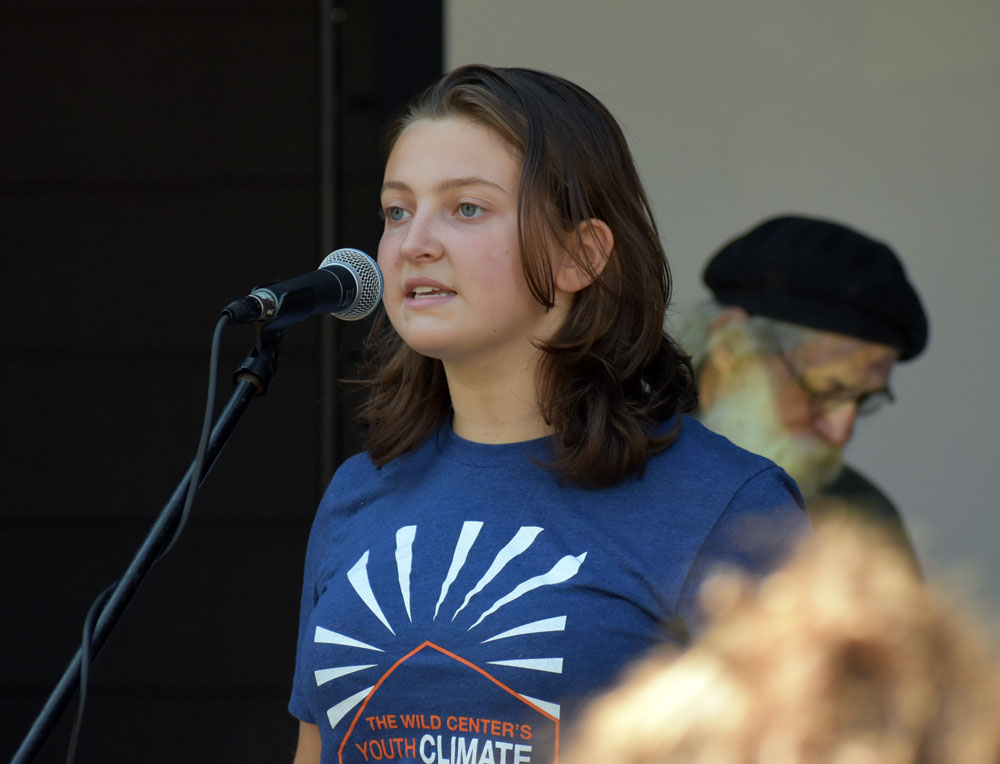 For many adults in the crowd, supporting the children was important.

Preston, who traveled from Essex to attend, said elected leaders need to do more to lead and stop climate change.

“It gives me great hope when I see the kids leading us,” Preston said. 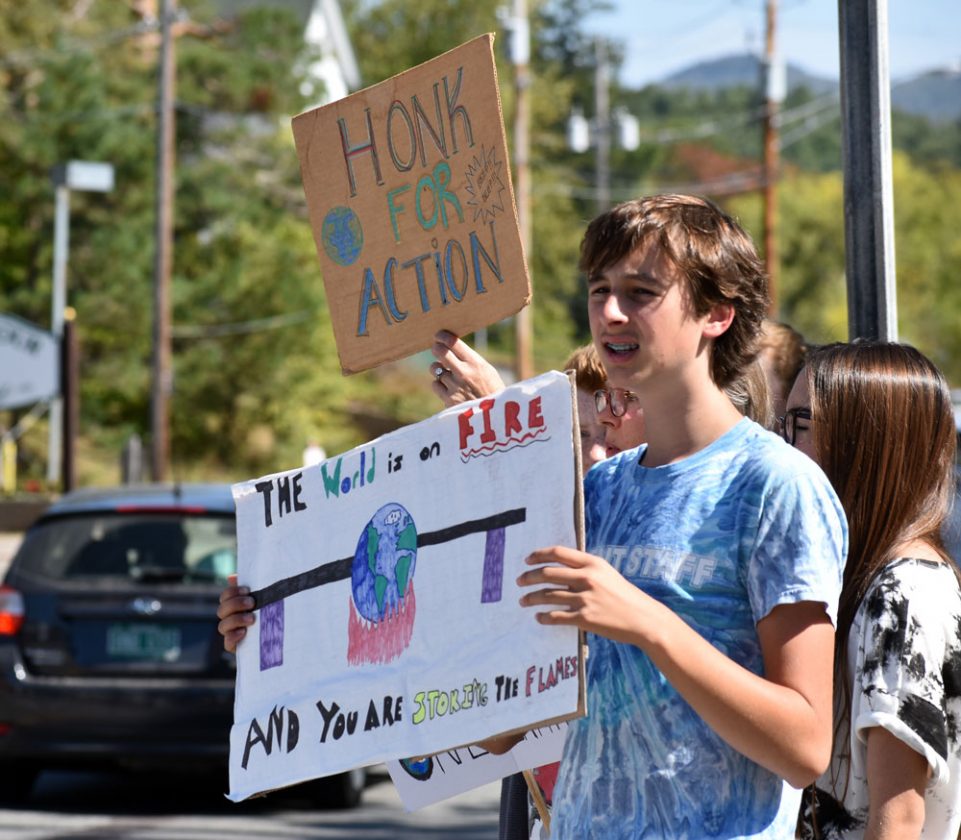 Just before 1 p.m., Keal led. A group of around 20 high school students followed her across the bridge on state Route 3 and then into Riverside Park where, from the bandstand with a microphone, she corralled the masses close to begin the speeches, presentation and song.

“We’re all worried about losing something that we love,” she said. “So what makes me hopeful is seeing you all here today.”

Lake Placid High School students Anya Morgan and Elise Pierson were the first to speak after Keal. They first thanked Lake Placid village Mayor Craig Randall, who was present with village Trustee Jason Leon, and North Elba town Supervisor Roby Politi. Lake Placid was one of several villages and towns whose boards passed symbolic resolutions supporting the protest, and Politi helped the Lake Placid students get transportation to the rally.

Pierson presented various impacts climate change has had, such as a rising average temperature, and the impact it will have, such as rising water levels. 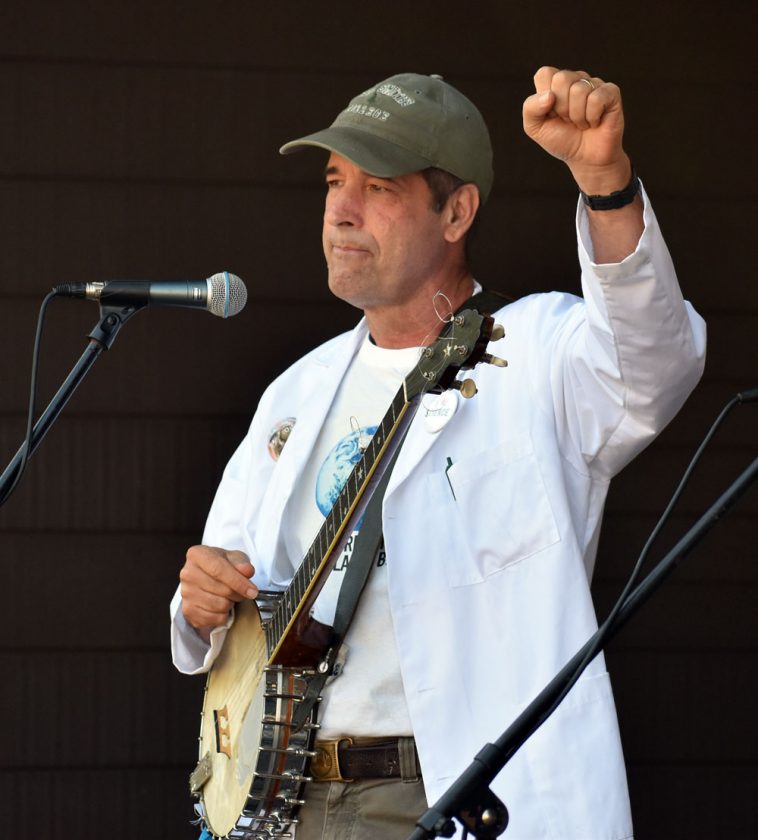 “Young people all around the world are demanding action,” Morgan said. “We are demanding immediate and urgent leadership from politicians to tackle climate change.”

North Country Community College student Schuyler Cranker said he had invited North Country Congresswoman Elise Stefanik, R-Schuylerville, to the rally but heard no response. Stefanik’s communications director Maddie Anderson said she was uncertain if their office had received an invitation but added that Stefanik was working in Washington today, as there were votes happening.

“Our representative to Congress, who did not respond to our invitation to come here,” Cranker said, pausing to allow for the boos from the crowd to subside, “she has repeatedly said that she’s all in favor of making changes, so long as they do not affect the economy. But she fails to recognize … that if we continue as we are, there won’t be no functioning economy.”

Franklin County Board of Legislators Chairman Don Dabiew, D-Bombay, said he was glad to see such a large group of people at the rally and hoped everyone votes. He said half the eligible voters in Franklin County are registered and only half of that group actually votes.

Nathalie Thill, director of the Adirondack Center for Writing, told a story about the terrible realization her son had when he was 5 that he might never get to swim in the Great Barrier Reef. 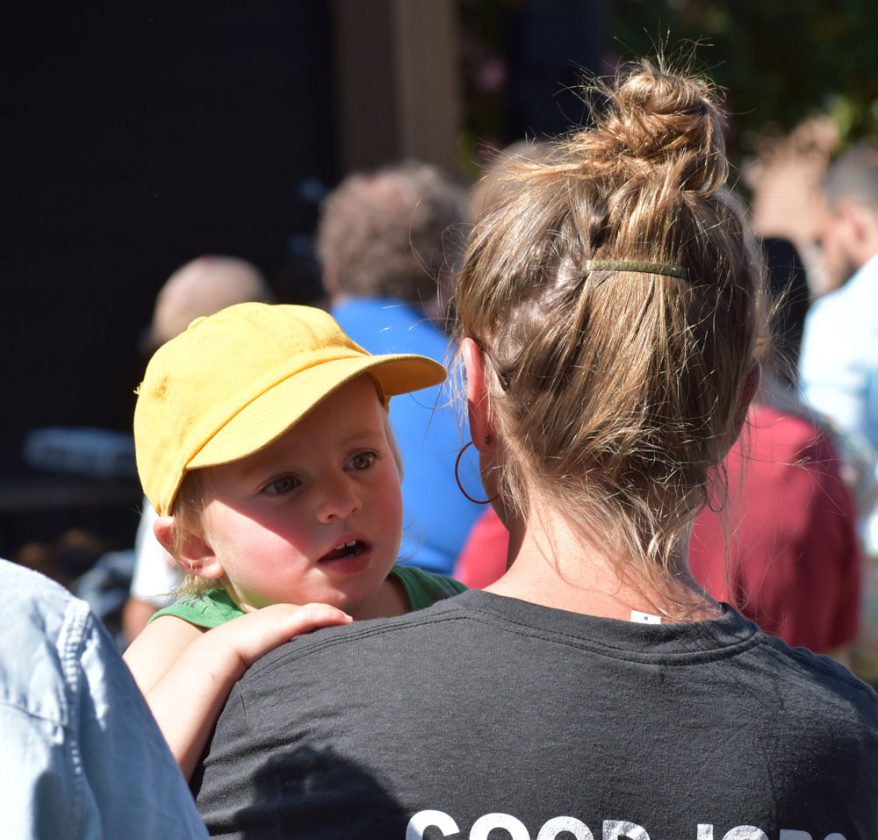 Sean Jackson of Paul Smith’s College spoke of a Climate Fellowship in which his friend Ryan Novak spoke to people in South Africa about the impact climate change has on their lives, and Jackson did the same in the Northeast U.S.

Paul Smith’s College Professor Curt Stager finished the rally by saying he thinks it is time for the new generation to take information scientists like him have gathered and do something with it. He said three things need to be done. First, use only clean energy. Second, stop subsidizing the fossil fuel industry. Third, bring justice to climate change victims.

He then sang a remix of “Old Town Road” by Lil Nas X, which has been the No. 1 pop song in the nation all summer.

“I’m going to take my voice to the old town road. I’m gonna fight ’til I can’t no more,” Stager sang, changing the original song’s chorus. 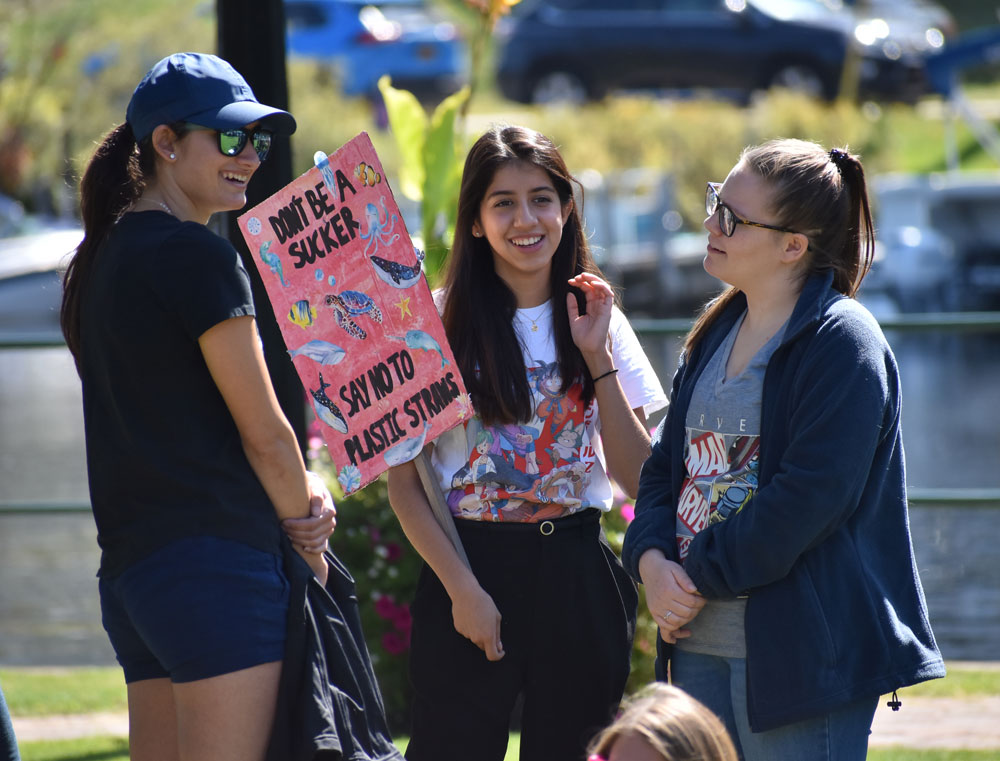 The crowd eventually chanted the chorus along, ending the rally. Students went back to school. Homeschool parents walked their children home. A few stayed behind to wave posters and elicit honks from cars on Route 3. 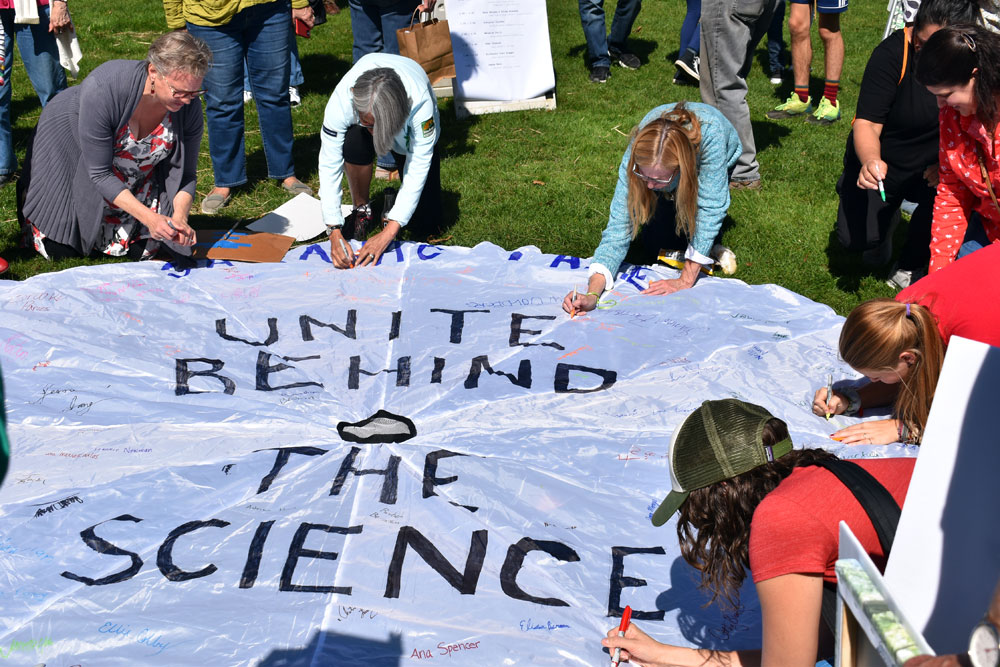