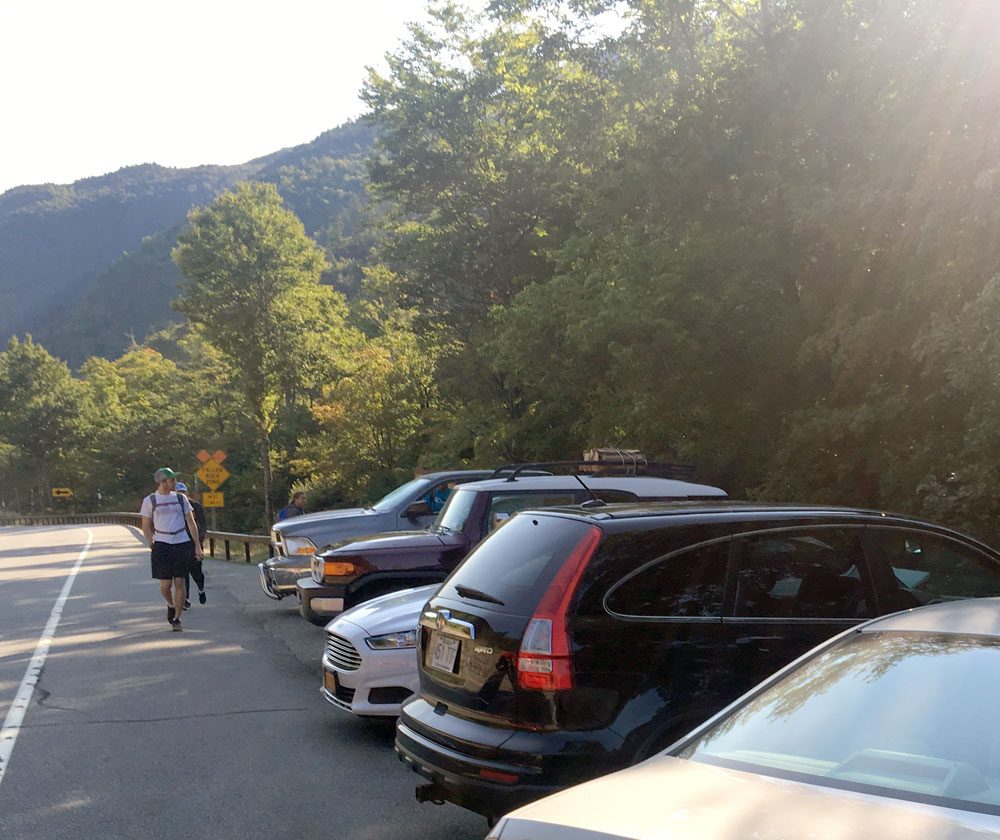 Hikers walk along state Route 73 to the trailhead for Cascade Mountain, the busiest of the 46 Adirondack High Peaks, in September 2016. (Enterprise photo — Antonio Olivero)

For the third year in a row, the state Department of Environmental Conservation has announced that it will take measures to increase safety during the busy Columbus Day weekend — including reducing the highway speed limit near some hiking trailheads.

The DEC, along with the state Department of Transportation, said it will reduce speed limits in some areas due to the influx of hikers visiting the state Route 73 corridor between Lake Placid and Chapel Pond.

In a press release on Monday, the DEC said the speed limit on Route 73 would be reduced to 45 miles per hour in the areas of Roaring Brook, Cascade Mountain and on state Route 3 outside of Saranac Lake at the Ampersand Mountain trailhead.

The release said the actions will be taken to “ensure the safety of motorists and hikers while managing use around some of the busiest trailheads.”

“By implementing these new actions as part of DEC’s ongoing efforts to promote sustainable use of the Adirondack Park, and encouraging New Yorkers to hike the park’s hidden gems rather than the High Peaks, we are helping to keep visitors safe while protecting the park’s environmental treasures,” DEC Commissioner Basil Seggos said in the release.

The press release also said state and local law enforcement will be out enforcing the speed limit and parking bans, and additional forest rangers will be stationed at popular trailheads during the holiday, which runs from Friday through Monday, Oct. 11 to 14.

Columbus Day is also Canadian Thanksgiving. It is a busy time for tourism in the Lake Placid area and is generally the last big weekend of the year for hiking.

In the past two years, DEC had closed the Cascade Mountain parking areas during the holiday weekend, but ongoing construction at the state’s Mount Van Hoevenberg Olympic facility will prevent that from happening this year.

The new trail to the summit of Mount Van Hoevenberg, which opened last year, has been rerouted due to the construction but is still open. The reroute adds about a mile of easy terrain.

Over the Labor Day weekend earlier this month, at least 590 groups, each with a varying number of people, signed in to hike Cascade Mountain, the most popular of the state’s 46 High Peaks. Despite a roadside parking ban on 4 miles of Route 73 between Keene Valley and Chapel Pond, dozens of cars continue to park there illegally on a regular basis.

DEC is also encouraging hikers to visit less popular places during the holiday crush, including Bear Den Mountain and Cobble Lookout in Wilmington, Rocky Peak Ridge from New Russia, and Poke-O-Moonshine near Keeseville. Essex County recently announced it will provide a free shuttle from Lake Placid to Whiteface and Bear Den mountains, as well as stopping at Whiteface Landing and the trailhead for Copperas Pond.