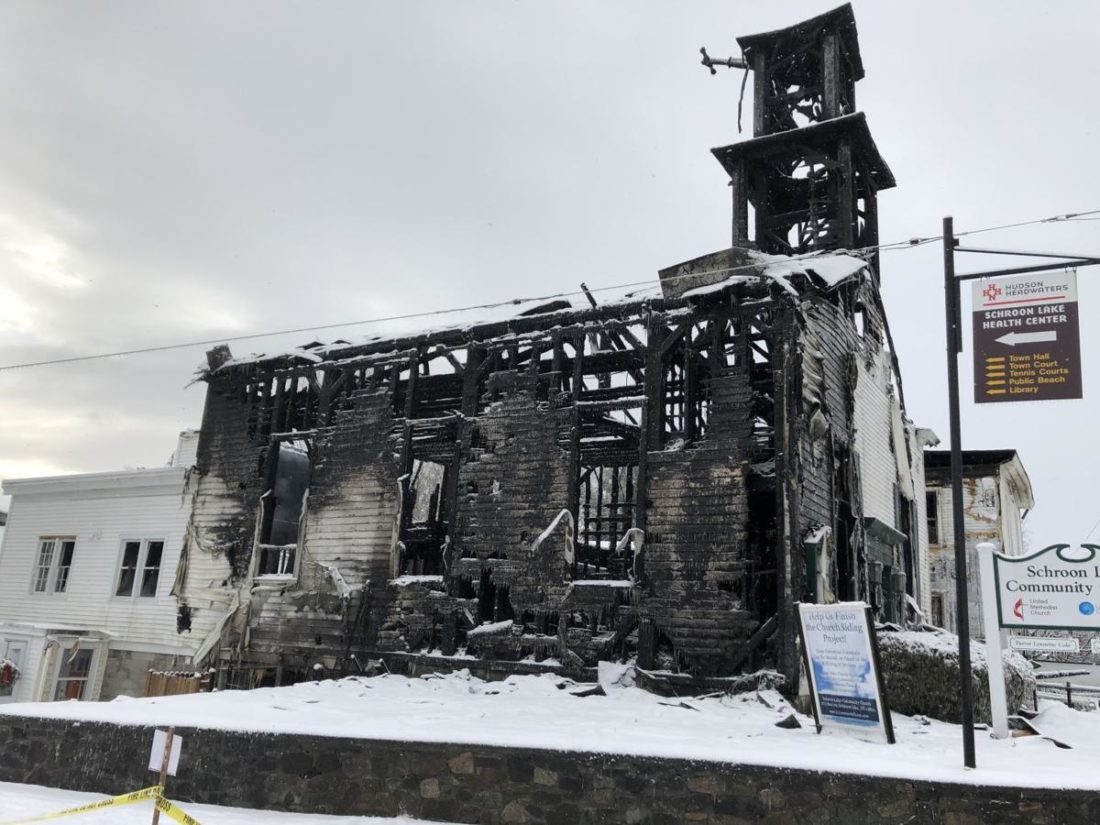 The charred remains of the Schroon Lake Community Church are seen in early January in Schroon Lake. (Photo — Don Lehman, The Post-Star)

SCHROON — The fire that destroyed Schroon Community Church last winter has been linked to an electrical problem, a determination that was finalized as church leaders move forward with a plan to rebuild the Main Street institution starting early next year.

The plan is to break ground in spring, hopefully in April, on the new church. It will be built at the corner of Main Street and Leland Avenue, where the historic church sat until it caught fire the afternoon of Jan. 2.

Essex County fire investigators and the state Office of Fire Prevention and Control went through the remains of the building for days and narrowed the area of origin down to the sanctuary area. The wire deemed responsible was underneath the sanctuary.

“It was accidental,” said Don Jaquish, Essex County’s emergency services coordinator. “The state (OFPC) was the lead agency and they determined it was electrical.”

Peter Johnson, president of the church’s board of directors, said an issue with wiring in a part of the basement known as the “dungeon” was determined to have been the source of the fire.

“The wiring was close to the joist, and as the wood moved, it rubbed against the wire, and the insulation rubbed off,” Peter Johnson said.

Fire investigator David Sutton wrote in a report provided to The Post-Star that the wire was between a wooden support brace and floor brace, and either frayed or overheated. No recent maintenance or renovation work had been done to the wiring, he added.

“In the end, everything brought the origin back to this area,” Sutton wrote.

With the fire cause determined, parishioners and church leaders are concentrating on moving forward with their new building, which will cost an estimated $1.25 million.

The church did receive an insurance settlement, but Terry Johnson, church lay leader and spokesperson and Mr. Johnson’s wife, said it will not be enough to cover the costs of the new church.

The plan calls for a single-floor building that will be easier for seniors to navigate. The building will not include a parsonage, as the decision was made to move it off-site to a location to be determined.

A stone wall around the property shown in the drawing that was released is optional, depending on funding.

“We are very excited at what God has in store for us and our new building to carry on his work,” Terry Johnson said. “We are blessed and thankful for all the fundraising efforts that have been held on our behalf. Additional funds are still needed as we plan for the new building and its contents, to include the carillon which plays the hymns every half-hour.”

The church has set up an online fundraiser on its website, slcommunitychurch.com.

There have also been numerous charity events in Schroon Lake for the parish in recent months, including a basketball game and T-shirt sale.

The church’s services have been held at the former Tavern at Schroon Lake on Route 9 since early March, and will continue to be held there indefinitely.