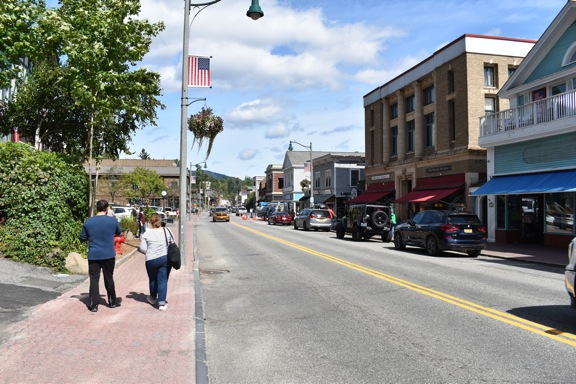 LAKE PLACID — Tourists spent nearly $1.5 billion in the Adirondack region last year, up slightly from $1.4 billion the year prior, a recent report shows.

The latest statewide tourism impact study, commissioned by I Love NY and compiled by travel data firm Tourism Economics, underscores the Adirondack region’s heavy reliance on its tourism sector despite its six counties raking in just 2% of the more than $71.8 billion total traveler spending statewide.

This report defines the Adirondack region as the entirety of Clinton, Essex, Franklin, Hamilton, Lewis and Warren counties. There are 12 counties total that lie partially within the Adirondack Park. There are only two wholly in the park, Essex and Hamilton counties.

The annual report found that once again tourism was more important to the Adirondack region’s economy last year than that of any other region in the state. The industry directly generates nearly 14% of all employment here.

Jim McKenna, executive director of the Regional Office of Sustainable Tourism based in Lake Placid, said that tax revenue generates a savings for local taxpayers.

Without the tax revenue from tourism, locals would need to pay an additional $1,700 in taxes to maintain the same level of government services, he said.

“The taxes generated by tourism, local taxes, is significant for the three counties that ROOST works with,” he said. ROOST has contracts with Essex, Franklin and Hamilton counties.

Tourist spending in Essex County has continued to grow over the last few years, accounting for approximately 33% of total spending in the Adirondack region last year, according to the report. That puts this county just behind Warren County, which represented 42%, for attracting the most spending in the region.

McKenna said the growth that Franklin County is seeing is significant as well. Between 2017 and 2018, the total tourism spending in Franklin County grew by around 10%, from $88.1 million to $98 million, according to the report. The local lodging industry saw the most notable bump in tourist spending, from $14.7 million in 2017 to $17.5 million last year.

“There’s more facilities available,” McKenna said, citing the opening of the Hotel Saranac in January 2018 following years of renovations. “That affects spending. There’s an overall, general interest in the region. All of those things play together.”

The report also shows that the Adirondack region is trailing behind the Catskills in terms of tourism growth.

Last year, the Catskills region — another so-called “rubber tire” destination that attracts other New Yorkers within a few hours’ drive — saw an 11.3% bump in tourist spending, and the year prior, spending growth of more than 7% to the Adirondacks’ 5.5%.

That may have something to do with a recent wave of investment in the region. According to the New York Times, visitors from New York City have begun to set up cafes, bars, woodworking shops, art studios, breweries and writing residencies in the region. The Catskill Park is also home to the Belleayre Mountain Ski Resort. That venue is under the direction of the Olympic Regional Development Authority. Like most Olympic venues around Lake Placid managed by ORDA, Belleayre is undergoing upgrades as a result of recent state investment.

But McKenna said while the Catskill Park has seen a tourism-related revenue boon in the last five years and benefits from its proximity to the New York City metro area, the Adirondack Park has grown at a faster rate since the 2000s.

“Overall, I think the Adirondacks have shown pretty good growth from 2009 on,” he said.

Statewide, tourism spending reached $71.8 billion last year, up 6% from 2017, according to the report. Tourism remains one of the state’s largest industries, tourist spending both directly and indirectly supporting close to 1 million jobs and generating billions of dollars in state and local tax revenue.

“New York state’s significant investments in tourism coupled with the efforts of tourism partners all across the state make for an unstoppable combination,” Ross Levi, the state executive director of tourism, said in a statement. “These historic numbers are evidence that our strategic efforts are succeeding like never before in positioning New York state as the ultimate vacation destination for visitors from around the world.”