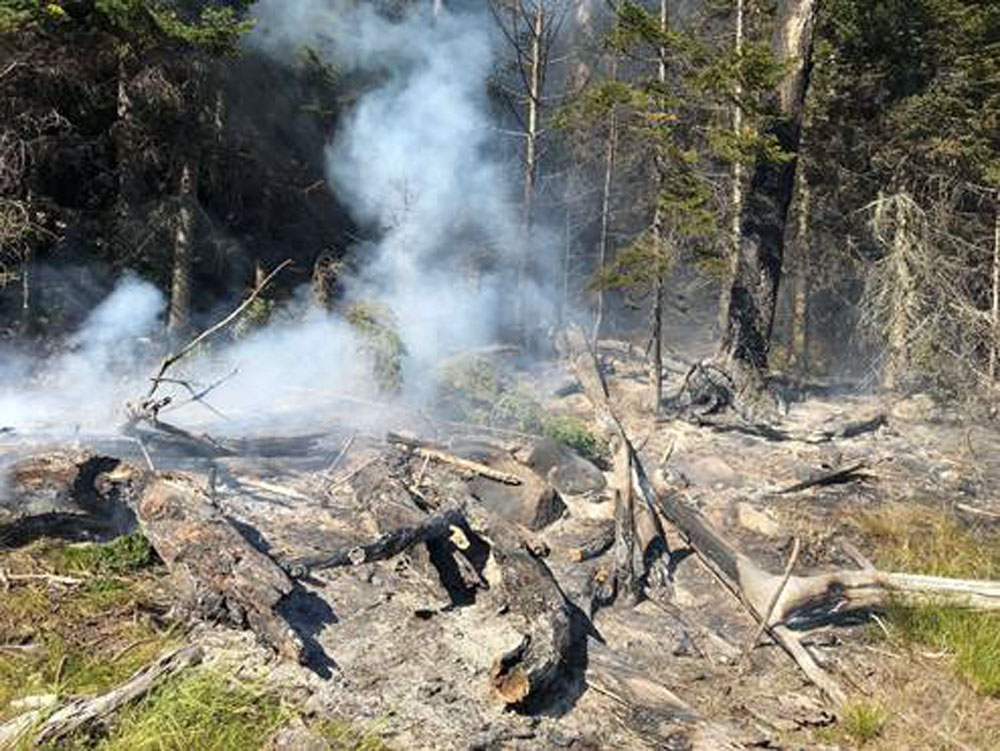 The smoldering embers of a wildfire, reported caused by an unextinguished campfire, are seen Sept. 18 in the Giant Mountain Wilderness. (Photo provided by DEC)

State Department of Environmental Conservation forest rangers fought a wildfire near the Giant’s Washbowl and assisted several lost or stuck hikers and paddlers last week in the Adirondacks.

On Sept. 18 at 10:46 p.m., DEC’s Ray Brook dispatch received a call from the International Rescue Coordination Center advising that a locator beacon had been activated by a 41-year-old Albany man. Coordinates placed the subject on the Osgood River north of Mountain Pond.

Forest Ranger Thomas Gliddi responded and located the man’s vehicle at 11:49 p.m. and proceeded into the woods.

The man was located at 12:30 a.m. along with a 41-year-old female companion from Wilmington. The couple had kayaked earlier in the day and ventured down Osgood River not realizing they were going the wrong way. The pair had intended to go to Meacham Lake but headed in the direction of Hays Brook. By the time they realized their mistake, the couple had run out of daylight and were unprepared for an overnight stay. They parked their kayaks and began to bushwhack through the woods to get to the Grasse Pond Trail.

Gliddi provided the pair with warm clothes, escorted them out of the woods and gave them a courtesy ride back to their vehicle by 1:45 a.m.

On Sept. 18, DEC’s Ray Brook dispatch received several calls from hikers in the High Peaks reporting smoke in the Giant Mountain Wilderness. Several rangers responded and located a smoldering ground fire adjacent to the Washbowl campsites. Keene and Keene Valley Volunteer Fire Departments were activated and assisted with the relay of equipment and construction of the fire line.

The fire was contained to half an acre in size. A New York State Police Aviation unit was requested and was able to insert pumps and additional resources. Over the next several days the fire was put out by forest rangers. State Police Aviation was deployed to retrieve equipment from the scene. The fire is believed to have been caused by an unextinguished campfire.

On Sept. 21 at 3:10 p.m., DEC’s Ray Brook dispatch received a call from Hamilton County 911 advising that they received a broken phone call from a group on Blue Mountain. The caller stated that the group had come across a woman who had fallen and injured her head and that they were currently assisting her down the mountain.

On Sept. 21 at 7:11 p.m., Essex County 911 transferred a call to DEC’s Ray Brook dispatch regarding a 55-year-old woman from Kirkville who was stuck on a ledge on Cascade Mountain somewhere above Lower Cascade Lake. The coordinates provided by Essex County 911 placed the woman northeast from where she started up at Cascade Falls.

Forest Rangers James Giglinto, Nancy Ganswindt and Thomas Gliddi responded to the Cascade Day Use Area to assist. Giglinto was first on scene and determined that the woman was further northeast than coordinates had placed her. Giglinto discussed options with supervisors and determined that it would be safer to hike in at first light to assist the woman down rather than navigate the ledges in the dark. The woman stated that she was fine with spending the night on the mountain.

At 6:30 a.m. the next morning, Giglinto, Gliddi and Ranger Daniel Fox met at the parking area at the outlet for Lower Cascade Lake and proceeded into the woods to locate and assist the stranded hiker. The rangers made contact with the subject by 7:53 a.m. and assisted her back down to the road. All rangers were clear of the scene by 10:25 a.m.

On Sept. 22 at 6 p.m., Hamilton County 911 contacted DEC’s Ray Brook dispatch regarding a 14-year-old girl from Syracuse who was separated from her hiking party on Black Bear Mountain.

Forest Rangers Jenifer Temple and Jason Scott responded to assist. Because cellphone coordinates were not immediately available, searchers began with nearby trails while the hiking party was interviewed.

The hiker’s unique walking stick was located by her family members on Uncas Road.

State Police in Albany were able to produce phone coordinates for the missing hiker at 7:51 p.m. The coordinates were then relayed to DEC’s Ray Brook dispatch. The hiker was located by Scott at 8:15 p.m. at the Eighth Lake lean-to, and she was brought back to the trailhead. The teen had taken a wrong turn on the trail on a lower elevation loop and eventually ended up at the lean-to.