Paul Smiths-Gabriels Volunteer Fire Department student-members Sam Branch and Chris Gilger put out a fire in a mock dorm room as part of a demonstration Wednesday at Paul Smith’s College. (Enterprise photo — Aaron Cerbone) (Correction: Gilger was misidentified in an earlier version of this caption.)

A fire rages in a mock dorm room, simulating how fast a blaze could engulf a room. (Enterprise photo — Aaron Cerbone) 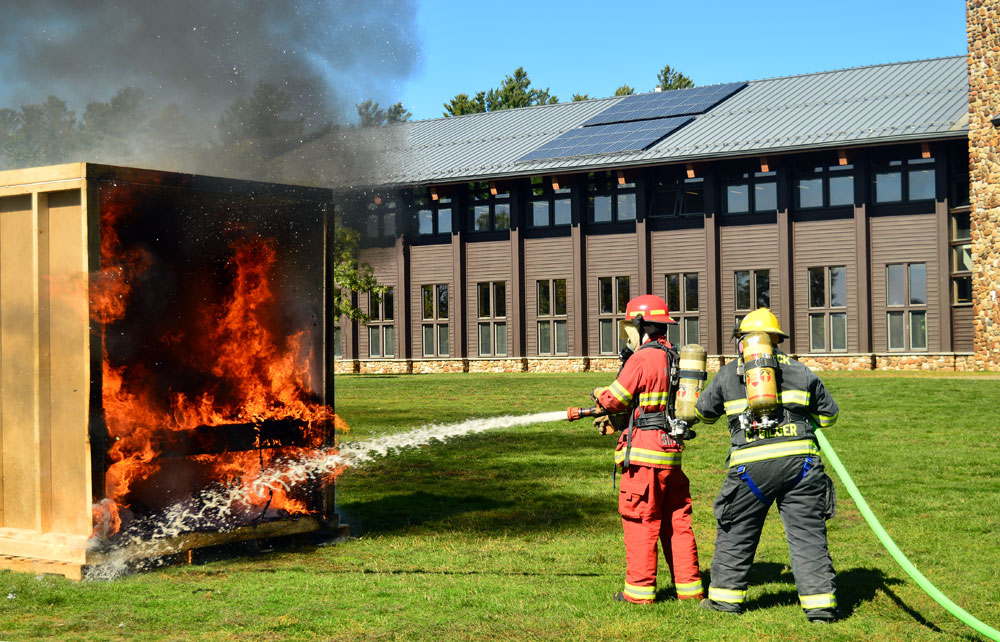 Paul Smiths-Gabriels Volunteer Fire Department student-members Sam Branch and Chris Gilger put out a fire in a mock dorm room as part of a demonstration Wednesday at Paul Smith’s College. (Enterprise photo — Aaron Cerbone) (Correction: Gilger was misidentified in an earlier version of this caption.)

PAUL SMITHS — The heat hit a crowd of 80 or so students as they gazed at flames erupting from a once-familiar-looking mock dorm room.

“Five hundred degrees is what we’re looking at,” said Chief Guy Swarthwout, from the state Homeland Security and Emergency Services’ Office of Fire Prevention and Control. “Who can live in that?”

This was three minutes since the fire was started.

The demonstration took place on the Great Lawn at Paul Smith’s College. The small, open-face room was filled with all the dorm staples: shirts and posters from campus events taped to the walls, plastic red cups strewn around and a mess of fabrics, paper and electrical wires under a bed.

The purpose was to show students how quickly a fire can overtake a room, how to avoid it and what to do if it does break out. 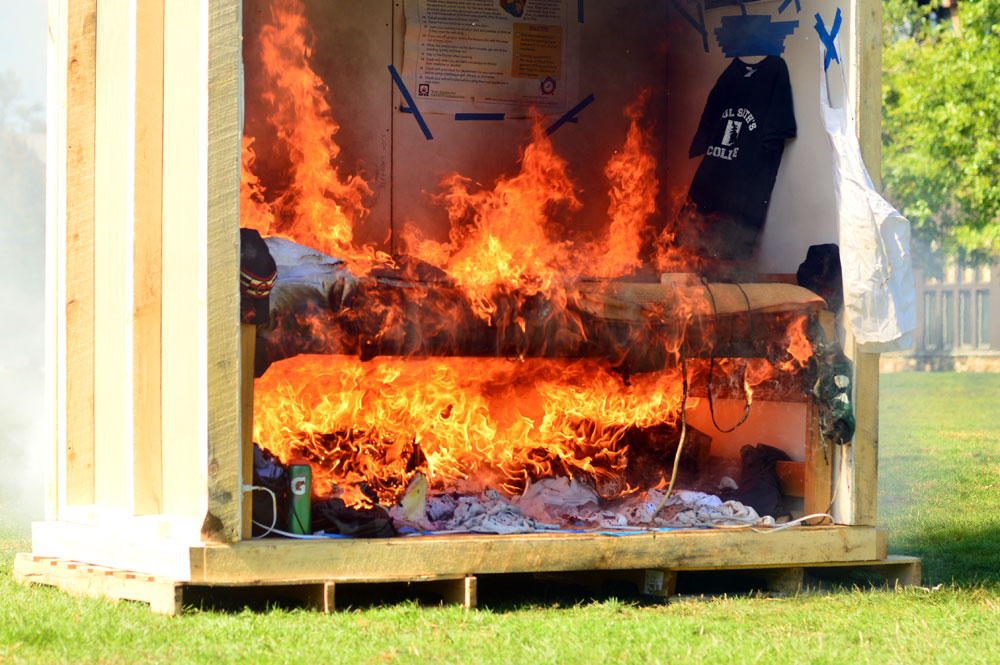 A fire rages in a mock dorm room, simulating how fast a blaze could engulf a room. (Enterprise photo — Aaron Cerbone)

Paul Smiths-Gabriels Volunteer Fire Department Chief Tom Tucker said the campus has seen its share of dorm fires in the past but that it has been a while.

Director of Campus Safety Holly Parker said these demonstrations used to be standard, but it has been a couple of years since the college held one.

“We did it a few years ago, and we had some students protest, so we took a break for a bit,” Parker said. “They were protesting because of some of the plastics we had in there. Even though we were pulling the plastics out, they still weren’t happy with it.”

She said they now try to limit the amount of plastics that are burned in the demonstration.

“For the amount that we have in there, educating our students on the importance of fire safety is a little bit more important to us,” Parker said.

Swarthwout gave a sort of “scared straight” speech as the fire was started and black smoke began billowing out of the structure. The silence from the crowd indicated that his gruesome message had their attention.

Swarthwout said he was seeking to clear up some misconceptions about how fire works. He said fire moves faster than people think, that it is harder to escape than is commonly portrayed in television and movies, and that gases pose a greater threat than the flames.

He said within two or three minutes a room on fire is completely uninhabitable, because the material the room’s contents are made of releases toxic gases when it burns. A couple of breaths can kill.

With the fire alarm starting to beep consistently, deadly smoke that would otherwise be contained in a dorm room billowed out of the box.

Within minutes, floor temperatures can reach over 200 degrees Fahrenheit. Swarthwout pointed out that water boils at 212 Fahrenheit.

“Boiling,” came the answer, murmured by the crowd.

Temperatures can reach up to 1,400 degrees at ceiling height.

“If you’re not out of that room in two to three minutes, if you don’t take the right actions immediately, that room becomes unsurviveable. … The fire department is not going to be able to rescue you. You have already met whatever fate you are going to meet because of that fire. You are the first responders.”

Flames licked around the walls and suddenly, as the bed caught fire, filled the wooden structure and flared out. In three-and-a-half minutes it had reached “flashover,” where flames engulf everything in the room. The temperature had raised 200 degrees in a minute to reach around 600 degrees.

The flames were loud, like a rushing wind, and the heat smashed into those standing up front.

“This fire … could happen in your residence hall, in your room. … Picture that room,” Swarthwout said as flames crackled, consuming water bottles, hoodies and pillows. “In that is your $2,700 computer and the textbooks that you paid $700 for and all your clothes and the report that you just had due today that you finished last night at three in the morning. All of that is gone. Fire prevention is the most important thing you can do.”

Paul Smiths-Gabriels Volunteer Fire Department student-members Sam Branch and Kyle Suruda grabbed a hose began to spray out the room. On a good day, they could be to the campus from the station in around 10 minutes.

Afterward, department members dissected the scene, analyzing how the fire spread and where the hottest spots were, commenting on how the stale, wet smell smelt good to them.

Swarthwout thanked the fire department members for their help.

Of the 47 total members of the Paul Smiths-Gabriels fire department, 21 are students.