Stefanik and 5 other NY congresspeople urge NYC not to ban flavored milk in schools. Opinions vary on the balance between milk’s nutrients and the added sugar of chocolate or strawberry 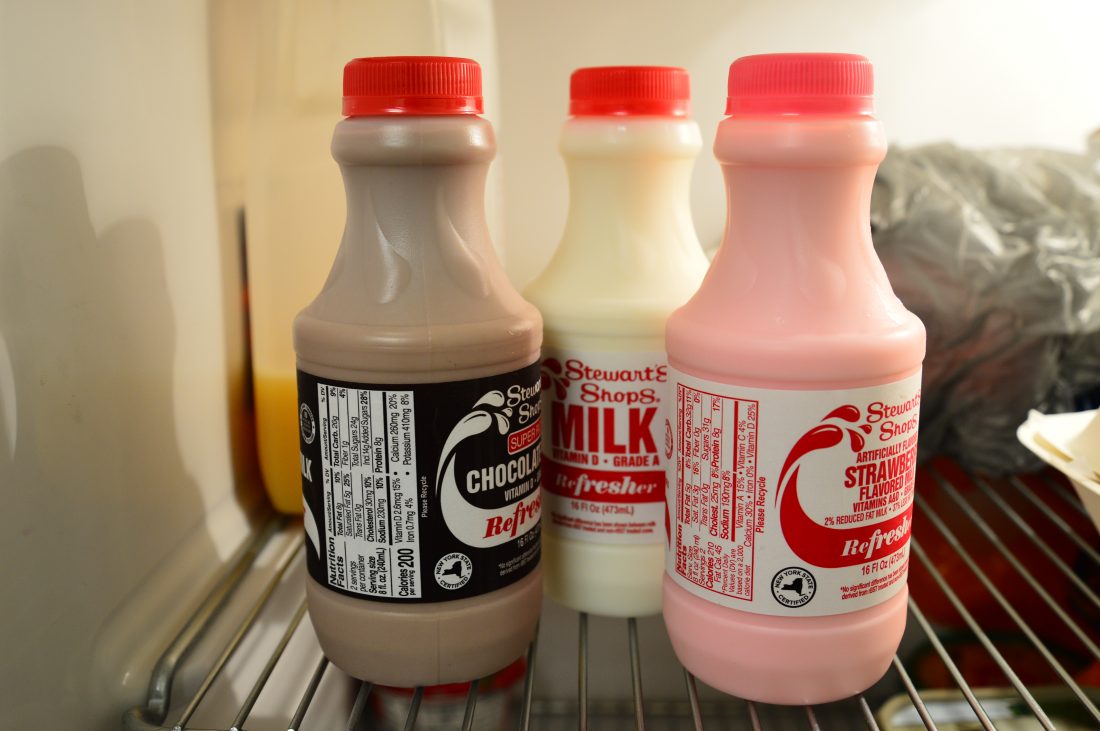 Chocolate, regular and strawberry milk — all whole milk varieties — are seen in a refrigerator. Strawberry has the highest sugar content of these three, followed by chocolate. Regular whole milk has natural sugar but none added. (Enterprise photo — Peter Crowley)

Stefanik, a Republican who represents rural northern New York, joined five other congresspeople from both sides of the aisle and around the state on Tuesday in signing a letter to New York City Mayor Bill de Blasio, asking the Democratic presidential candidate to keep flavored milk in his city’s school cafeterias.

The letter, signed by two Republicans and four Democrats, came after the New York City Department of Education proposed a ban on the sale of flavored milk at city schools. Plain white milk would be allowed, but not all the other ones, including chocolate, strawberry and vanilla.

“I strongly oppose Mayor de Blasio’s reckless and irresponsible proposed flavored milk ban, as it would do a serious disservice to upstate New York’s dairy farmers, many of whom reside in my district and support our rural economies,” Stefanik said in a press release. “North Country dairy farmers are proud to supply wholesome dairy products, including flavored milks, to schools not only in New York City, but across the state.”

According the the U.S. Department of Agriculture’s 2017 census, the latest data available, there are approximately 1,145 dairy farms in the 12 counties included in New York’s 21st Congressional District. There are 4,000 dairy farms statewide, according to the New York Farm Bureau.

Most of these farms are small, family operations, and much of their product ends up as cheese rather than milk.

New York Farm Bureau Public Affairs Manager Steve Ammerman said the state’s $2.5 billion dairy industry makes up around half the agriculture value in the state, with other markets paling in comparison. Ammerman said New York is usually the third or fourth largest state in the country for dairy production.

He said the New York City school system is a major purchaser of milk, too, and that if it pulls out, it would have ripple effects for farmers and consumers.

“Anytime there’s a drop in demand and an increase in supply, it’s inevitable that it will affect milk prices,” Ammerman said. “Ultimately, it would affect the milk price for everybody.”

Stefanik has always made a point of backing dairy producers. She cosponsored the WHOLE MILK Act in May 2018, which would bring whole milk back to schools participating in the National School Lunch Program after the administration of President Barack Obama limited schools in the program to selling 1% unflavored milk. She also cosponsored the Dairy Pride Act in March, which would prohibit food that does not come from an animal, such as soy milk, from calling itself “milk.”

There is strong disagreement over the health value of flavored milk, with scientific studies and data pointing to different conclusions.

Local school districts have differing policies about flavored milk, but all have it in the menu in some way.

Saranac Lake only sells the sweeter milks on Fridays. Lake Placid keeps them as a treat, randomly including them on the menu. Tupper Lake has flavored milks on the menu every day.

The NYC DOE’s stated reason for the ban is reducing the intake of sugary drinks of city students. The letter refutes that claim, citing several studies published in health journals, including the Journal of the American Dietetic Association and the journal Pediatrics.

The Congress members’ letter asserts that it’s not healthy to be lacking lactose, and since over two-thirds of milk served in school is flavored, it is a good way to get certain nutrients to the kids.

“Studies have shown that flavored milks are the vehicle through which many growing children receive essential nutrients,” Stefanik said in her news release. “Removing the option of flavored milks in schools is an unnecessary threat not only to children in the New York City school system, but a serious and avoidable threat to our vibrant upstate dairy economy.”

Julie Holbrook, the food service director for seven schools around the North Country, does not agree with those conclusions. She is passionate about healthy eating and said the studies cited in the Congress members’ letter do not tell the whole story.

She said that if kids drink less milk because it is not flavored, that’s a good thing. She said students can get those nutrients (calcium, vitamin D and potassium) from other places such as cheese, breads, fruits and vegetables.

The studies cited by the letter Stefanik signed assert that kids who drink plain or flavored milk consume more calcium, vitamin D and potassium than kids who do not drink flavored or plain milk. Some of the studies cited in the letter do not define flavored milk as a “sugary drink,” saying the sugar content in a glass does not reach the criteria, and that the health benefits outweigh the extra sugar and calories.

Holbrook said sugar in flavored milk would be fine if the rest of a modern diet didn’t have so much other sugar in it. She said all the kitchens at her schools do scratch cooking, avoiding preservatives, sugars and additives, without having a budget towering over ones that rely on processed foods.

The letter cites several situations that it says point to indirect health benefits of flavored milks.

“Studies have shown that reducing or eliminating the availability of flavored milk in schools has led to overall decreased milk consumption and increased food waste,” the letter asserts. “In fact, a study of Oregon schools by Cornell found total daily milk sales declined by 9.9% when flavored milk was removed from the cafeteria and was associated with 6.8% fewer students eating lunch. When flavored milk was returned to the Los Angeles Unified School District after a five-year ban, there was a 78% reduction in milk waste.”

The NYC DOE has not yet made clear what it intends to do.