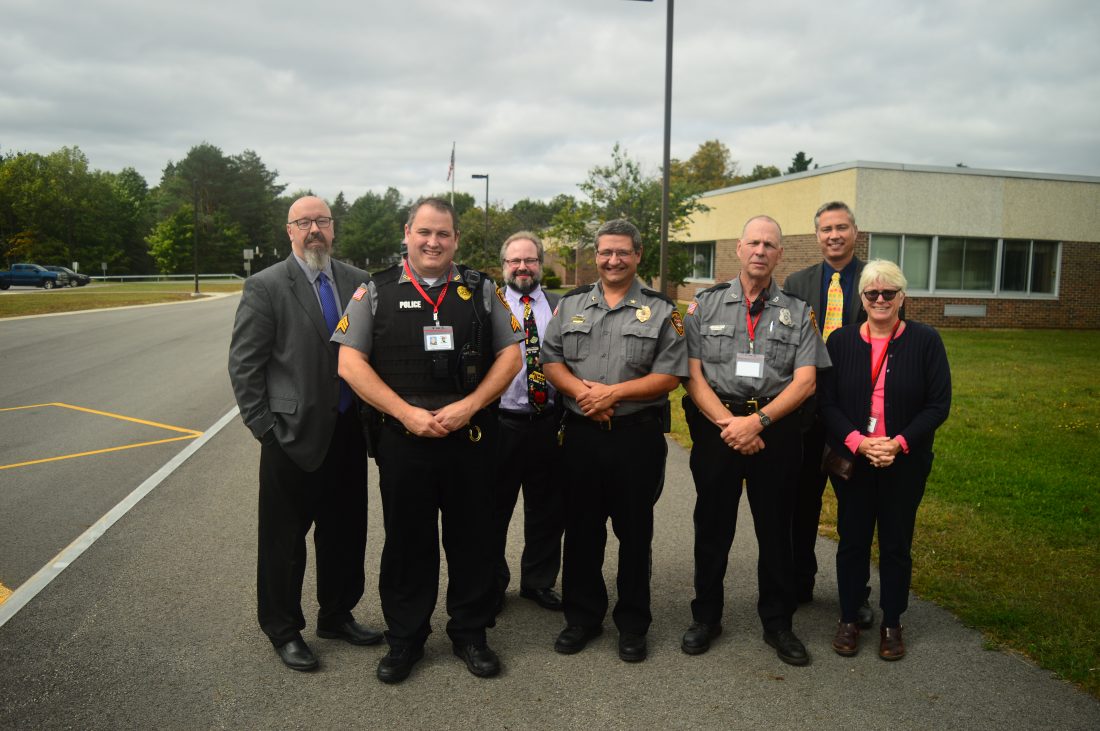 TUPPER LAKE — When students in this district went back to school Sept. 5, they were greeted by two new school employees, Tupper Lake Police Department officers with badges and guns who have been hired as school resource officers to increase building safety.

Sgt. Geoffrey Carmichael and retired chief Tom Fee are the district’s first SROs, law enforcement officers who work from within the school building, one at the middle-high school, one at L.P. Quinn Elementary school. Last year the school held several public hearings to discuss the viability of contracting with the village police for SRO services, following the lead of schools nationwide that are looking to better protect students from increasingly common school shootings.

So far, the response at the public meetings, at the school buildings and from parents has been almost wholly positive. But Tupper Lake Central School District Superintendent Seth McGowan said none of the people involved have developed any “strong opinions” on it yet, because the program is so new.

“Because there was so much discussion about it … leading up to it, it’s not like the kids, or their parents, or the staff was surprised by the officers being there,” McGowan said. “It’s the ‘so far’ thing. We’re not into far enough into it to have strong opinions one way or another. It’s a process.”

Chief of village Police Eric Proulx said he has received “100% community support” for the SROs from the start.

“If they weren’t (supportive), I would have been more hesitant about the program,” Proulx said.

With a national eye on school safety, especially regarding gun violence, many districts have taken to hiring their own security to be ready for emergency incidents. The U.S. Naval Postgraduate School found that 55 people were killed in acts of school gun violence in 2018.

“The climate in our nation now, if that continues to happen regardless of firearm reform or what-have-you. If it continues down the road we are, I — believe me, I like to think I’m wrong — but I think it may end up being a mandate for education that schools employ a school resource officer,” Proulx said. “By doing it now, we’ll be ahead of the curve.”

The decision to hire SROs was expedited by the district holding a drill last fall, when several law enforcement agencies held a tactical drill simulating an active shooter situation.

“That was a very upsetting kind of day, but it was also very revealing,” McGowan has previously said. “Immediately after that we started buttoning some things up that we knew would help.”

That said, McGowan also pointed out that a school resource officer does not eliminate the possibility of a threat; it just reduces the harm one can cause.

“I think maybe people have become immediately too comfortable that (we) have a school resource officer,” Proulx said, pointing out that SROs can only improve safety, not guarantee it. “But it’s nice to know that people are more comfortable and feel more safe for their family and their children just by having just one person in the school.”

The officers do more than just security work. They also act as counselors, educators, public relations for law enforcement and whatever else the school needs them to be.

L.P. Quinn Principal Michele Pinard said in one day she saw Fee and Carmichael at a fire drill and then at an English language arts celebration, showing “the full spectrum” of their job.

Both officers attended SRO training last month to learn the specific duties of the position.

Pinard said the program had a “smooth launch.”

McGowan said it was important to him that the SROs have a local connection, and both Fee and Carmichael were common faces around school.

For years, officers would be seen at the beginning and end of every day, as kids arrived and departed on the buses. The police department still does these school visits on their patrols, but now there is a consistent, all-day presence at both buildings.

“Speaking for the middle-high school, we’ve had such a good working relationship with these guys over the years that right now it doesn’t yet feel different,” middle-high school Principal Russ Bartlett said. “It feels like old friends in the building.”

“Tommy’s been in the school district his whole life,” Proulx said.

Since 1976, Fee has been a substitute teacher at the district on and off, and he ran the D.A.R.E. program from its second year at Tupper Lake until 1988 when the State Police took over.

He said students have been asking if is substitute teaching again.

“My own son even asked,” Proulx said. “He came home and said to me, ‘Why is Mr. Carmichael in school?’ They notice that something’s different.”

Carmichael did not have the same lengthy experience at the school and said he has been learning how the educational world works.

“It’s been great. The kids are for the most part very open, especially at the elementary level,” Carmichael said. “It’s exciting. They have a lot of questions. They’re very inquisitive.”

Both officers said they have enjoyed working with the children. Fee spoke highly of how the kids reacted during the school’s first fire drill of year, with always takes place on 9/11 and coincides with the time two planes struck New York City’s Twin Towers in 2001. The district punctuates the drill with a moment of silence.

“Mr. Bartlett … we were so proud of your kids, our kids,” Fee said. “There wasn’t a word said. They were awesome.”

Though Proulx said the program has not affected the operation of his department, he is looking to replenish his officer supply. He said the Franklin County civil service exam took place last Saturday and that results will be released in a couple months. He hopes to hire two officers to replace the SRO officers and one to replace Keegan Muldowney, who resigned from the department in May.

With public, police and school support of the program, the administrators plan to continue it, saying no one has expressed having second thoughts about it. They will continue to develop and mold the program as it continues, and have a group of representatives from the district ad police department who will meet occasionally to discuss any changes to the program.