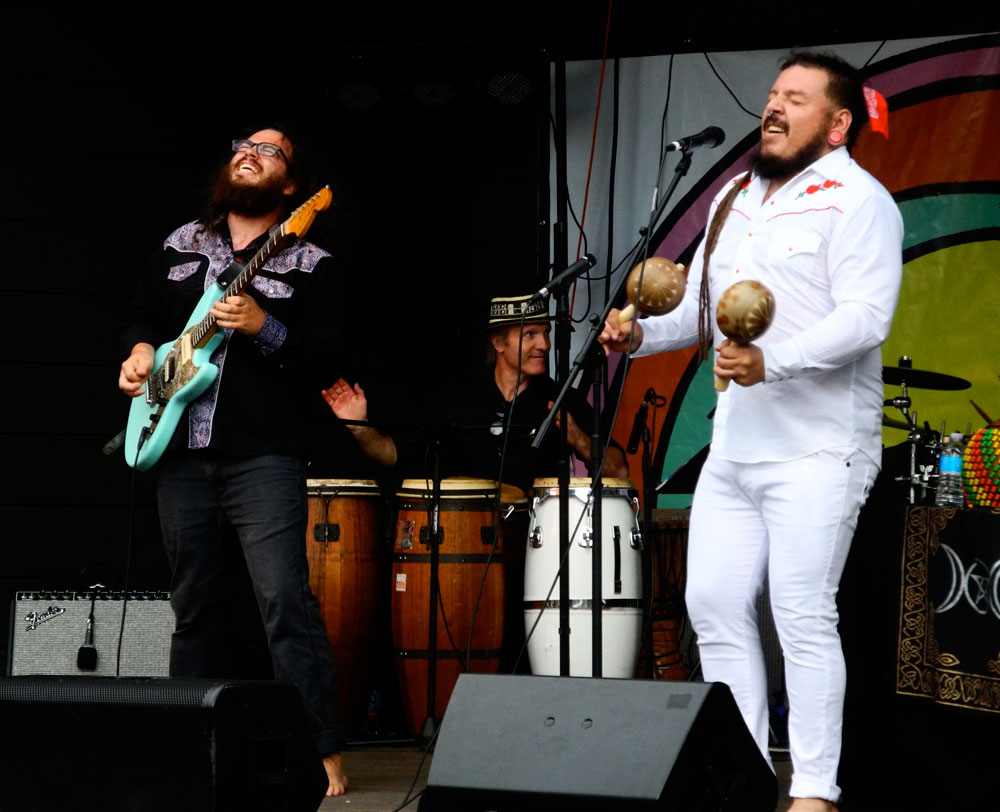 SARANAC LAKE — Sunday was a test for the undertakers of the newest version of HoboFest, Northern Current. It appears they passed.

At 11:30 a.m. Saranac Laker Steve Langdon kicked off the event with his guitar. Shades of nature — green, brown and navy blue — drifted around the white tent that had been placed in Riverside Park for the Farm 2 Fork Festival the day before. Dozens of people drifted toward the bandshell to hear the variety of musical acts.

Langdon paused just after finishing his set. He asked for the audience’s attention. On a speaker 5 feet ahead of him, slightly to the left, were pictures and items that memorialized a man who died last year and to whom many in the musical community were extremely close, Jeff Couture.

“He was a quiet but incredibly talented musician who supported a lot of people,” Langdon said.

A recording of Couture playing a song he wrote, “Buckets of Rain,” played on the speakers. A group eventually formed around the speaker, talking, hugging, holding and remembering. 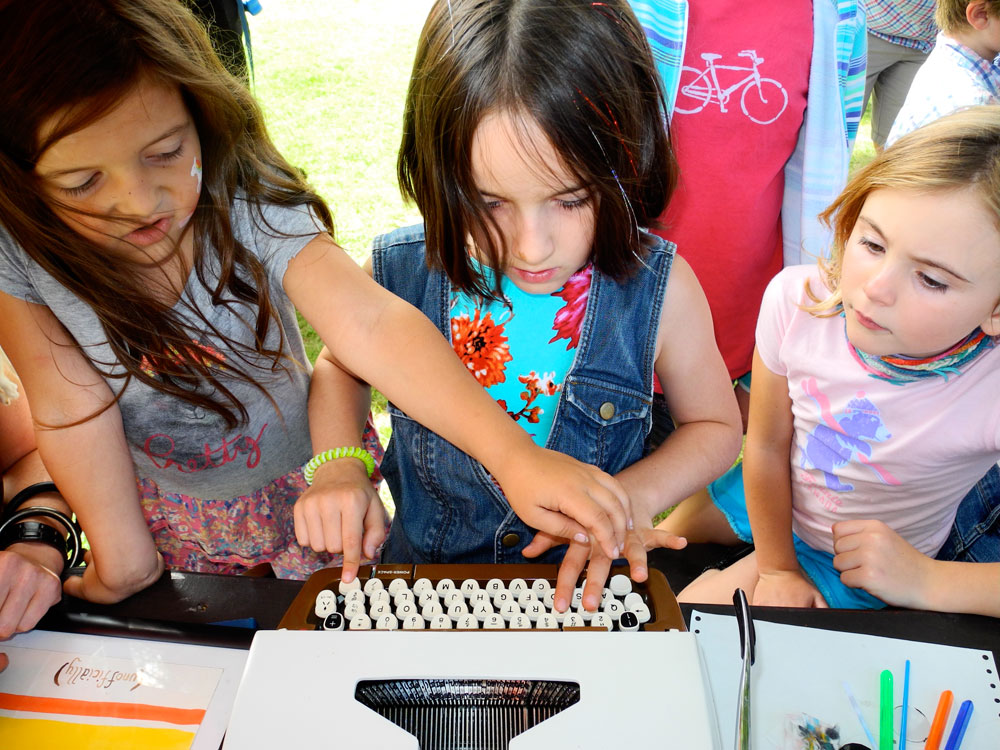 Ellie Henderson, 7, of Saranac Lake tries out a typewriter with help from two other girls — one of many activities for kids at the Northern Current music festival Sunday at Riverside Park in Saranac Lake. (Enterprise photo — Peter Crowley)

Savage Folk gripped the crowd next. Arthur Buezo played several songs, some of which are on his album that will be debuted next week. The crowd had grown. Where most had been centered around the front of the tent, which is closest to the stage, people now drifted around, mingling, relaxing on picnic blankets, fishing food out of woven baskets, kids darting through the crowd. It was like a folksy remix of George Seurat’s “A Sunday Afternoon on the Island of La Grande Jatte.”

The shift in music from folk to something entirely else started slow with Useless Cans’ music, which features classical Russian songs and jazz. The crowd had now at least doubled, and it would again in a little over two hours. Groups hovered around the other things to do at Northern Current. A kid’s section offered face painting, a bouncy house and a small drum circle. HoboFest and Northern Current merchandise were available in a tent near the stage. Food trucks fed the crowd, and a man offered massages.

Around 4 p.m., the crowd had grown. One had to watch one’s step so as not to bump into a dog, a blanket or a fold-up chair. Attendance was soaring, and spirits were high.

“I love it. It’s a great opportunity for community, socialization and music,” said Karen Baker, who plays in the band Moment’s Notice.

Russell Feher, who had worked on the sound for HoboFest in the past said he was glad to finally relax and enjoy the music instead of working. 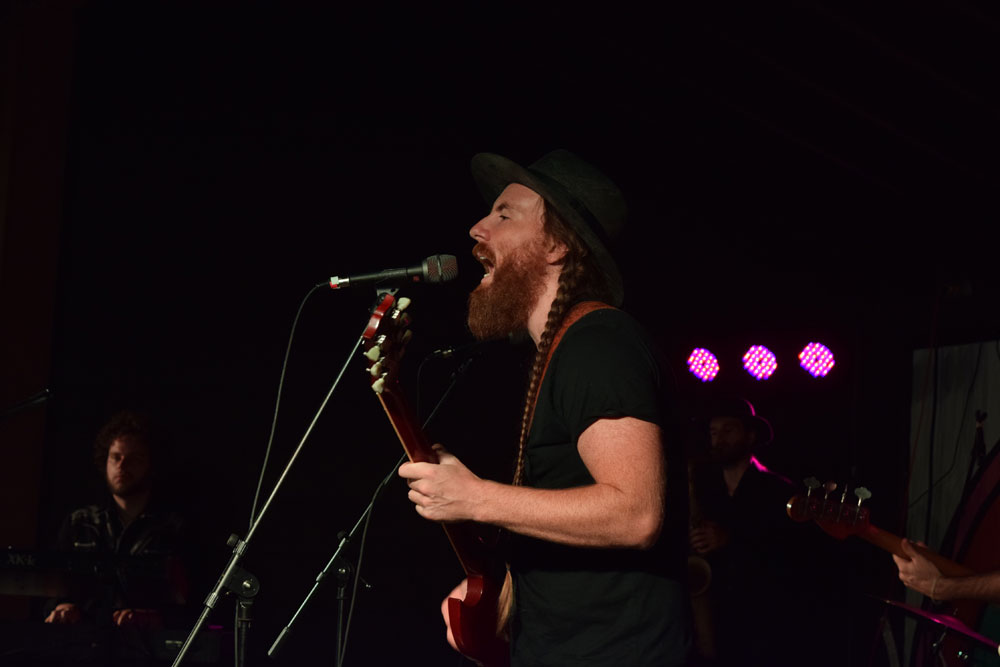 Mal Maiz stepped on stage. For the first time, but not the last, a group huddled near the stage, dancing.

“Where I come from, we believe music is medicine,” said Maiz Vargas Sandoval, the group’s lead singer. “So I hope you leave here feeling better.”

People swayed, swerved and swung between each other. People let their bodies flow with the music. Maracas, a large flute, conga drums and a piano echoed together, forming a Costa Rican rhythm that leapt far from what had been playing.

“The music is outrageous. The variety — the music is a splendid mix,” said Angela Petitto, who had attended HoboFest for the 10 years it existed.

Mosiac Foundation, a roots reggae group from the Finger Lakes, kept up the energy, at times drawing in the crowd with a call-and-response. 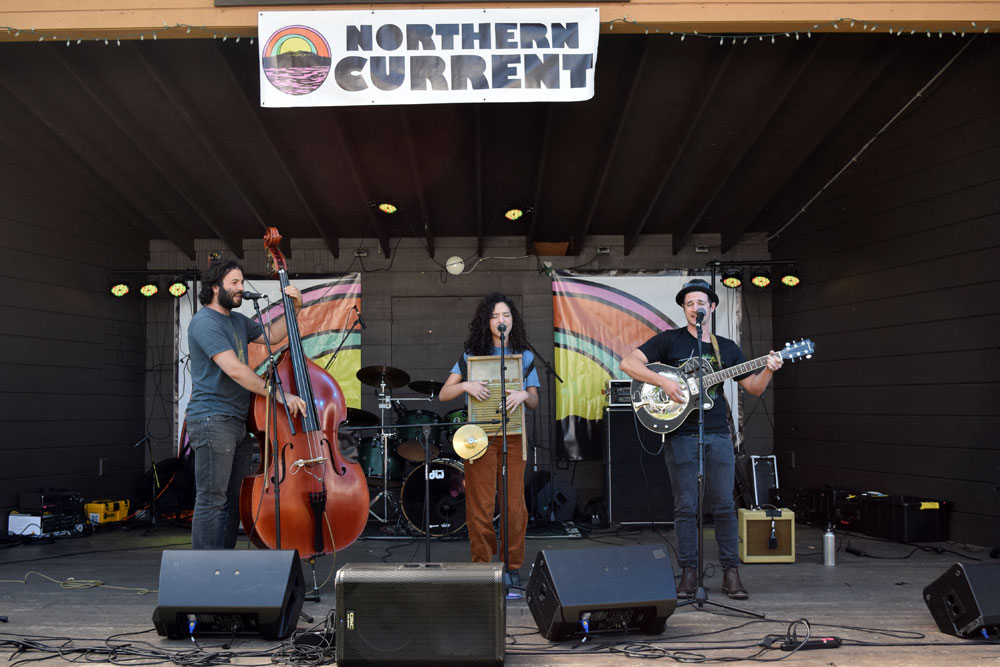 The crowd had been shuffling around the park, mingling, eating and listening, but Soma Beats brought the audience right up to the stage. Soma Beats featured several musicians drumming on instruments resembling conga drums. But unlike everyone else that afternoon, they stood in front of the stage. People formed a half-circle to get a glimpse and snap a picture of the musicians and several local dancers clad in exotic clothing. It ended with a free-for-all, as brave audience members hopped into the dance stage.

Night fell. The time had come for Kat Wright to take the stage. Wright’s voice roared over the park. Locals and tourists stood in the tent, shadowed by orange string-up lights. And then, what had been threatening the event for several hours with the dark presence of cloud cover happened. Rain.

Wright and the soul band finished to thunderous applause. Couples had been dancing, kids and adults hula hooping and individuals swaying to the horns, strings and vocals, but when the music stopped for a break, many left. After 30 minutes, Chestnut Grove took to the stage with about 100 people remaining in the audience.

Those who stayed made the most of the pouring rain, hugging the end of the stage, jumping up and down with the lead singer, Dee Gerhart. 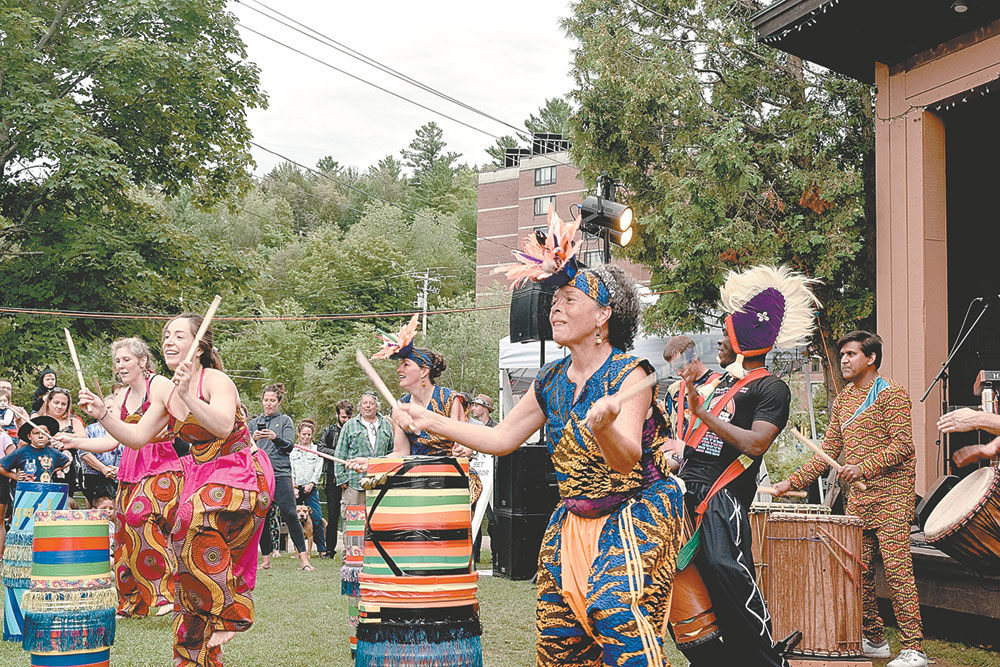 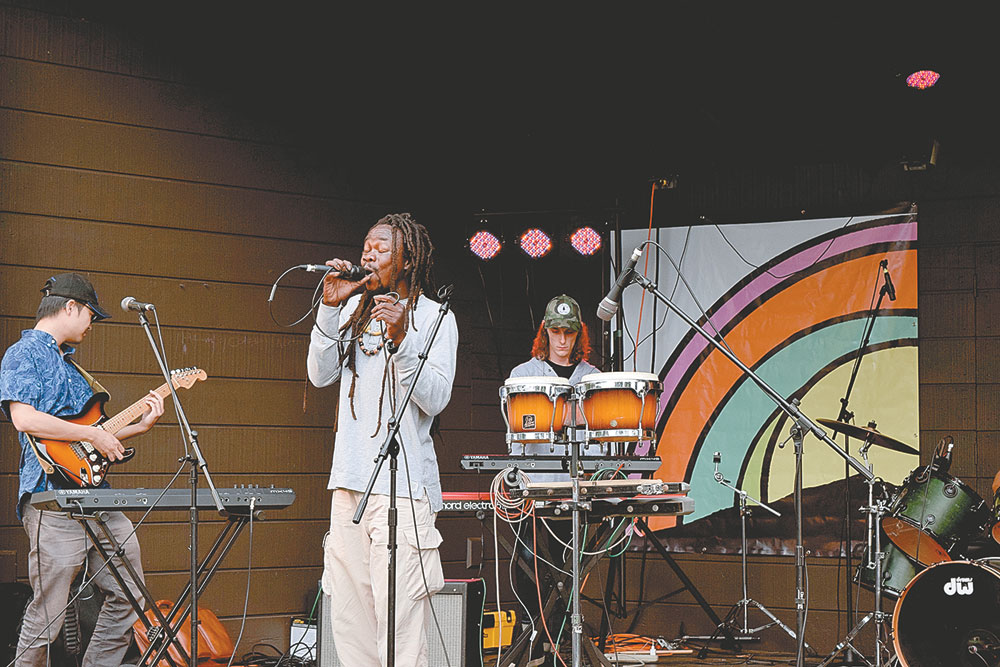 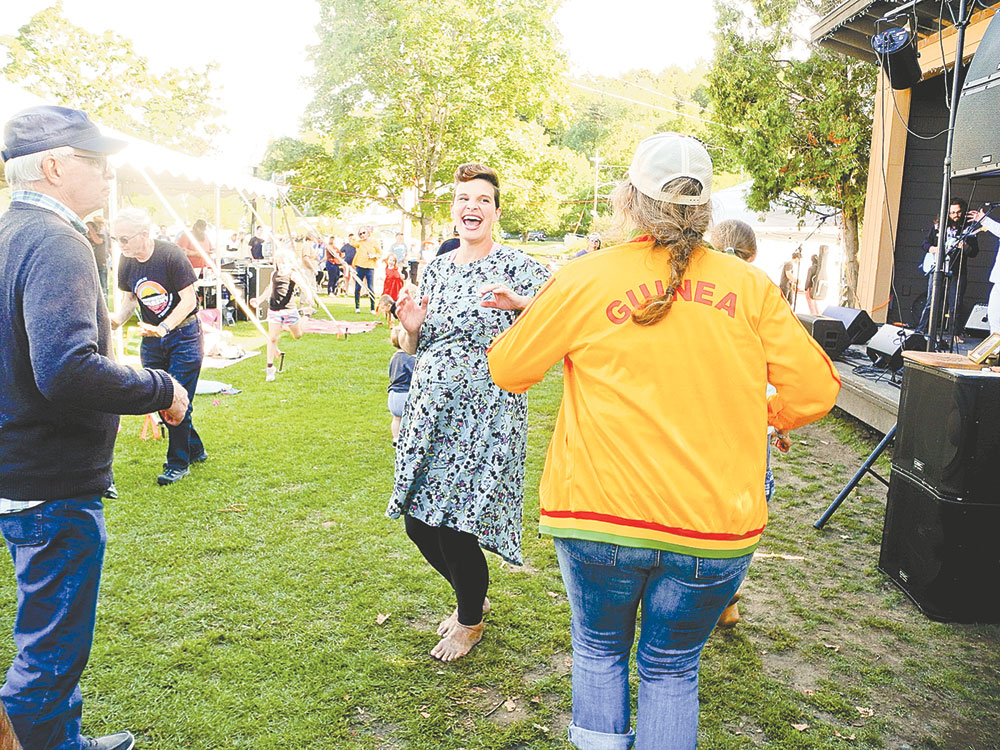 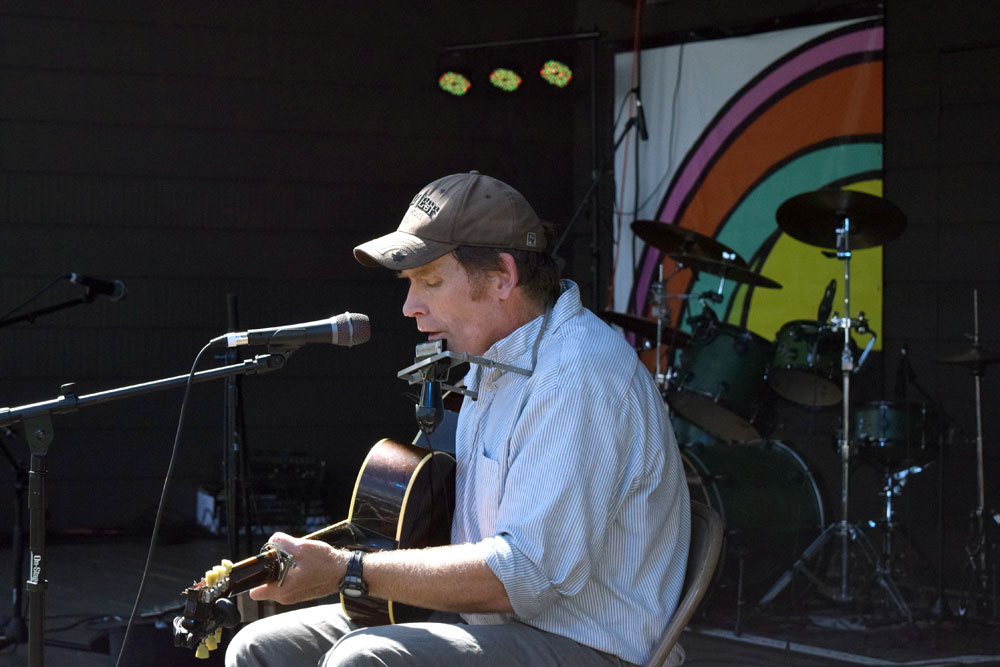 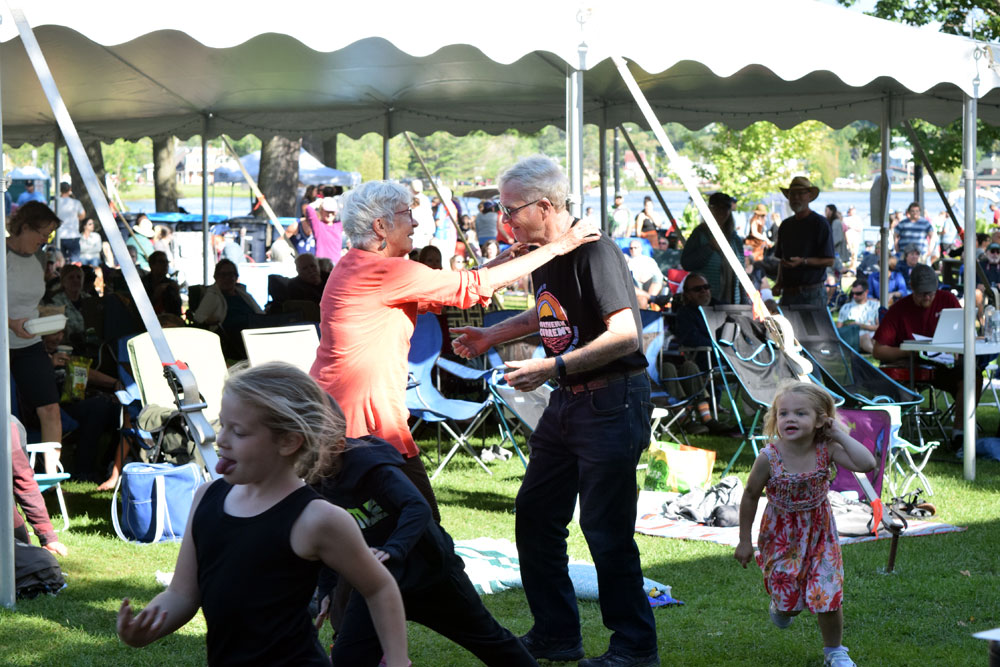