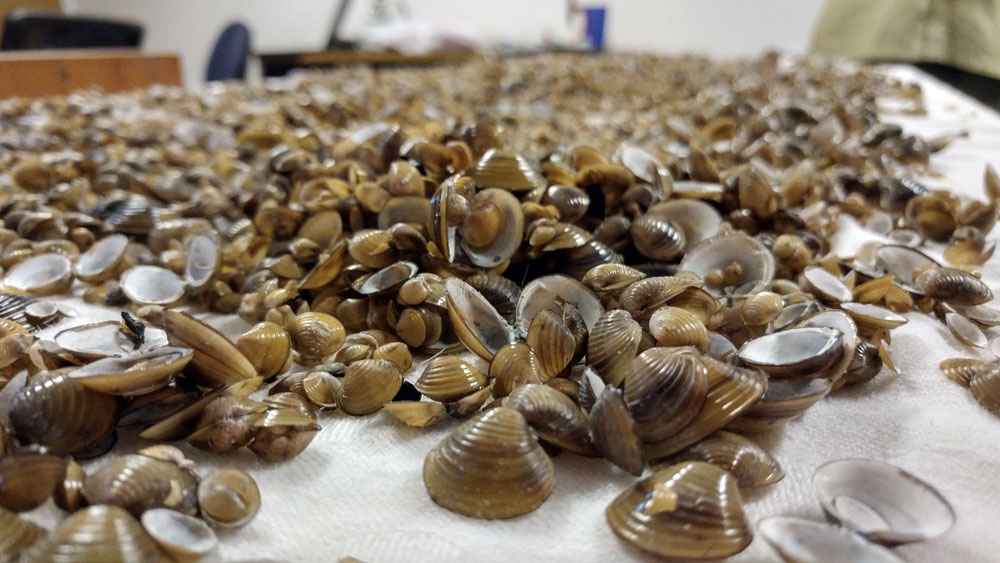 The annual effort to determine whether invasive Asian clams have spread in Lake George led to the discovery of three new sites with clams earlier this month, bringing the total number of infested areas to 27.

The small clams, which can cause water quality problems, were found at Fort Ann Beach and in underwater areas off Sun Castle Resort and Still Bay Resort, both on the east side of the lake in the town of Lake George. The two resorts are just a short distance apart.

The Fort Ann Beach discovery consisted of one clam, but it was believed there were likely more in deeper water off shore of the beach, according to the Lake George Park Commission, which coordinated the search effort.

Despite the continued spread, there have been no noticeable water quality concerns that have been linked to the clam sites, Park Commission Executive Director David Wick. And because treatment efforts that were pursued during the first few years after the discovery were viewed as cost-prohibitive in light of the clam’s resilience, there were no plans to continue them. (It cost an estimated $80,000 an acre to purchase the mats, put them in place in the fall and retrieve them each spring.) Teams of volunteers working with the Lake George Asian Clam Task Force searched around the lake in early September, checking the sandy areas that the clams prefer as habitat to see if they had taken hold in new areas that had not been documented in past years.

While there are now 27 sites where clams have been documented since first discovered, the infested areas amount to about 150 acres of a 26-mile long lake.

The clams have not taken hold in popular beach areas, as it appears that the sandy bottom being disturbed keeps them from settling. Wick said just a few have been found in the beach area at Million Dollar Beach, while outside the swimming area the number increased noticeably.

Wick said he did see, though, that there were visible shells of dead clams showing up along the shore in parts of the village of Lake George.

Efforts were made to smother infested areas with mats during the winters of 2010-2015, and the mats did kill off large numbers of clams. But the clams quickly bounced back in the warmer months, which led to a decision in 2016 not to continue that treatment.

“We simply don’t have the resources to do that,” Wick said.

It was initially hoped that the clams would be killed by cold water, as many thousands died during a particularly cold winter in 2013-14. But the fact that they have persevered has led to concerns they may be adapting to the conditions.

“A concern from a biological perspective is that the clams most adapted to cold weather conditions are the ones surviving each year, and they are the ones who reproduce the next generation of clams which will also likely be cold-tolerant,” the clam report reads. “After several generations, it is likely that the clams in Lake George will be more cold-tolerant and more likely to survive the cold winters, thus leading to increased populations long-term.”

Research is continuing by scientists at Darrin Freshwater Institute into whether a freshwater worm known as chaetogaster that appears to prey on the clams can be used to help control them.