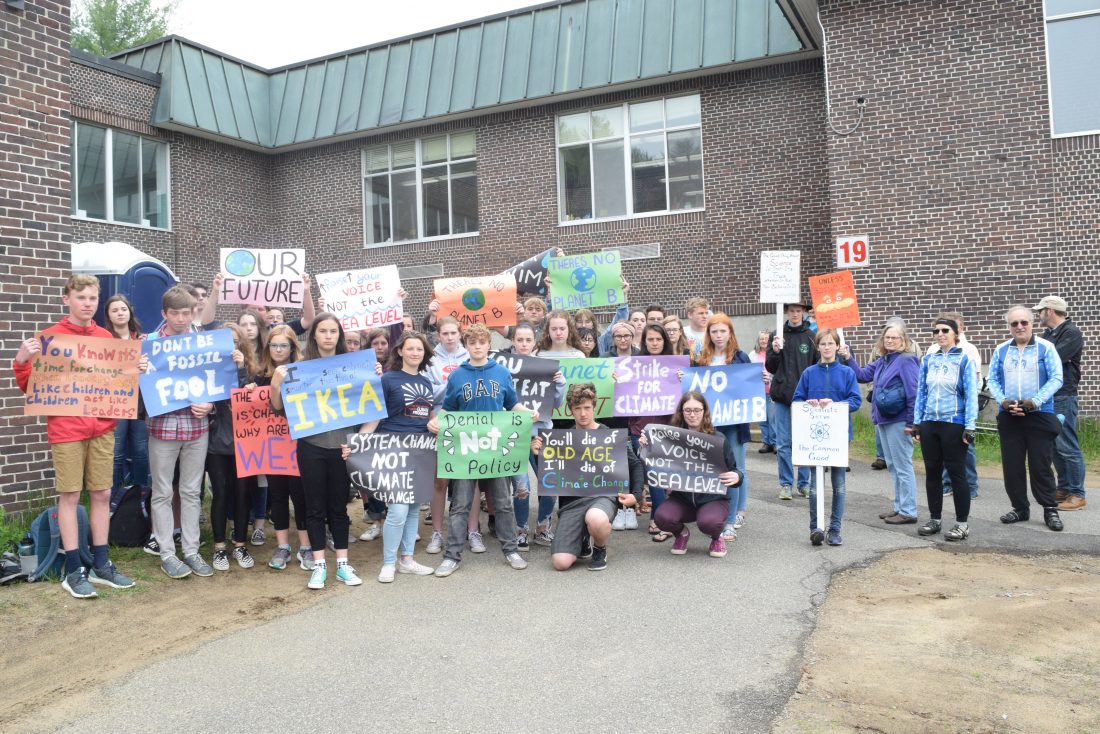 Students and community members came together in May outside Saranac Lake High School to speak out about climate change and to motivate those in power to do something to stop it. (Enterprise photo — Kevin Shea)

SARANAC LAKE — Support for a student-organized “climate strike” in Saranac Lake is gaining traction across the North Country.

The Saranac Lake Village Board of Trustees passed a resolution at its meeting Monday evening, supporting the event that will be held from 1 to 2 p.m. Friday Sept. 20 at Riverside Park, in concert with a movement called the Global Climate Strike.

Trustee Paul Van Cott pumped his fist and shouted “Yes!” when the resolution was brought to the table.

The Franklin County Board of Legislators passed the resolution last week. County Manager Donna Kissane said it was passed unanimously, as climate change is a concern.

The strike will be one of many held across the U.S. It comes before the 2019 Climate Action Summit on Sept. 23. The hope is if enough support is shown across the country, it will “boost ambition and accelerate actions to implement the Paris Agreement on Climate Change,” according to the resolution.

“For Sept. 20, that Friday, I urge any and all of you to try and make it down to Riverside Park for 1 p.m.,” Saranac Lake Trustee Rich Shapiro told his colleagues after Monday’s village board meeting ended.

Mayor Clyde Rabideau said he would be out of town on business.

“We think it’s wonderful that our local students are so interested in our environment and political process,” Rabideau said after the meeting, “and this was a great exercise for them and a great experience.”

“I am thrilled that they’re keeping their effort up from last year,” Trustee Melinda Little said.

The event is organized in part by Leena Keal, a Saranac Lake High School junior who organized a walkout climate protest in late May. She, like many others around the world, was inspired by Swedish 16-year-old Greta Thunberg, who protested government inaction on climate change by going on a solo strike from school and instead sitting on the steps of Swedish Parliament, starting last year.

The May event included more than 30 students and several members of the local community.

This effort is expected to see more students and adults. Shapiro said students are coming on buses from Keene, Lake Placid, Tupper Lake, North Country Community College and Paul Smith’s College. Madeline Clark of Saranac Lake, who is helping with communications for the protest, echoed that in a Guest Commentary published on the Opinion page of today’s Enterprise.

The event is also expected to have more support from local government. Similar requests for backing have gone out to the boards of Essex County, the towns of North Elba, St. Armand, Harrietstown and Tupper Lake, and the villages of Lake Placid and Tupper Lake, according to Shapiro. He said he’d received positive feedback from boards the resolution has already gone in front of.

The Tupper Lake town board will decide on the resolution at its meeting at 6 p.m. Thursday, according to town Supervisor Patricia Littlefield.