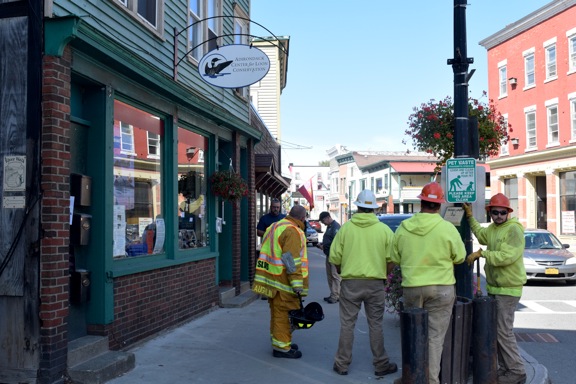 Members of the Saranac Lake Volunteer Fire Department and village Department of Public Works Thursday search 15 Broadway for a possible gas leak after a call about a sulfurous smell in the building. (Enterprise photo — Kevin Shea)

SARANAC LAKE — A toxic concoction stymied traffic on Broadway Thursday and filled 15 Broadway with the scent of rotting eggs.

A little after noon, the Saranac Lake Volunteer Fire Department was made aware of a possible gas leak at the Adirondack Center for Loon Conservation. Darlene Ploof, who works there, said she noticed the smell after 11 a.m. and called the fire department.

“That was my biggest concern — a gas leak,” Ploof said.

Firefighters checked out the Adirondack Center for Loon Conservation office. The furnace was shut off, and the windows were opened, but the source of the smell could not be found.

The smell was strong, reaching across the road and pervading throughout the building. The smell came and went, leaving the scene and rushing back in like a wave. Those working in the Adirondack Center for Loon Conservation office reported feeling light-headed.

The portion of Broadway between Woodruff Street and Main Street was partially closed.

Saranac Lake Department of Public Works employees checked the sewer system to look for a source of the smell.

Upon further investigation, firefighters discovered that one of the tenants had mixed Drano, bleach and boiling water and poured it down the sink to fix a clog, according to SLVFD Chief Brendan Keough.

Cheryl Joyce, a professor in the natural science department at Paul Smith’s College, said that Drano, which is sodium hydroxide, and bleach, which is sodium hypochlorite, do not react together chemically. She said her best guess was that the boiling water mixed with the bleach and caused it to vaporize, creating toxic fumes. She added that the two things you don’t want to add with bleach are ammonia or an acid, such as vinegar. If either were present in the sewer line, that could have produced a toxic gas.

The windows and doors of the building were opened to air it out, and the sewer system was flushed.

The Adirondack Center for Loon Conservation office was closed for the rest of the day.

(Correction: An earlier version of this article had Cheryl Joyce’s last name wrong.)