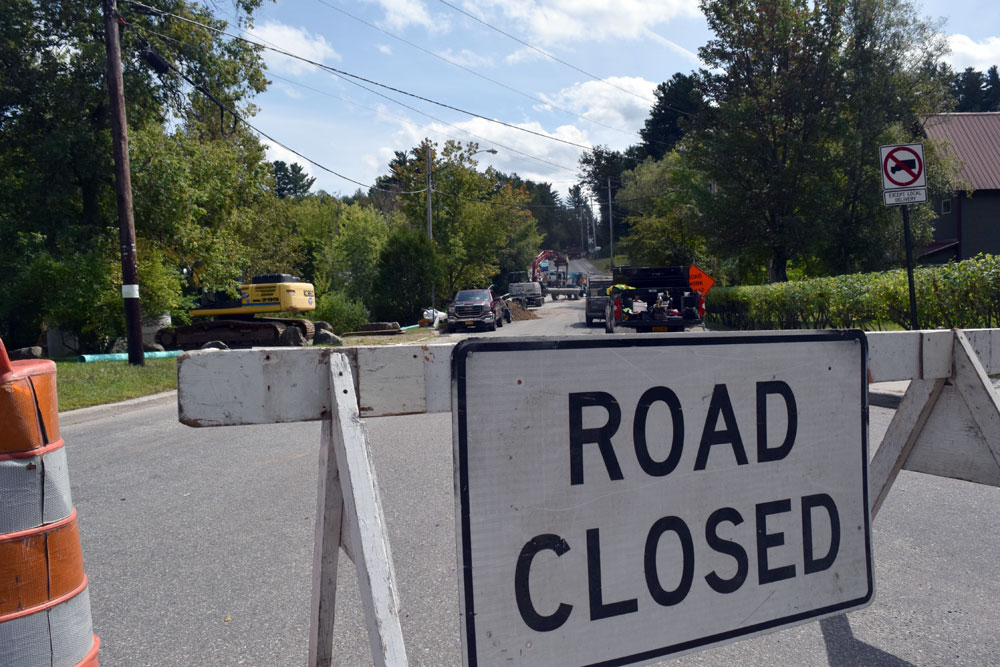 Part of Pine Street, Saranac Lake, is closed on Tuesday as a sewer pipe leading from the federal prison in Ray Brook still needs to be repaired. (Enterprise photo — Kevin Shea)

SARANAC LAKE — The impact of a prison’s burst sewer pipe spilling into the Saranac River is minimal, according to the state Department of Environmental Conservation.

On Sunday, Sept. 1, the Federal Correctional Institute in Ray Brook reported a sewage spill to the DEC Spills Hotline. The federal prison had been dealing with a blockage in its sewer line that leads to Saranac Lake’s wastewater treatment plant. That clog shut down all plumbing at the prison. Inmates and staff had to use portable toilets, and inmates were only allowed scheduled showers, according to Douglas Doty, the prison’s public information officer.

But as the line was unclogged, one of the pipes burst on Pine Street in Saranac Lake, releasing an estimated 5,000 gallons of sewage onto the road, according to DEC. The prison immediately notified the DEC and the village of Saranac Lake Department of Public Works at 4:50 p.m. Twenty minutes later, at 5:10 p.m., the line was shut and the leak stopped.

Lime was used to treat the road, and the area was swept, according to Erica Ringewald, a DEC spokesperson. But an unknown amount of sewage made its way down storm drains, and some made its way into the Saranac River.

Ringewald said environmental impact from the spill was minimal due to the amount of rain received prior to the sewage spill and the resulting high levels of water in the stream.

The prison’s crew temporarily replaced that section of sewer pipe with a bypass line over the road. As of Tuesday, there was 24-hour staff observation on the bypass line to ensure there isn’t another leak. The broken piece of the pipe will be replaced.

Doty said the prison’s sewer line is of various ages, as it has been replaced several times over the years. That line was originally laid when the facility that is now the prison was built to house athletes for the 1980 Winter Olympics in Lake Placid.

The work, being done by the prison’s staff and Fuller Excavating, is still not finished. The section of the pipe on Pine Street has yet to be fully replaced. Pine Street is still closed as construction is ongoing.

Doty said he was not aware of any complaints at the prison due to the burst pipe.