Born in a post-9/11 America, some teens choose to protect and serve 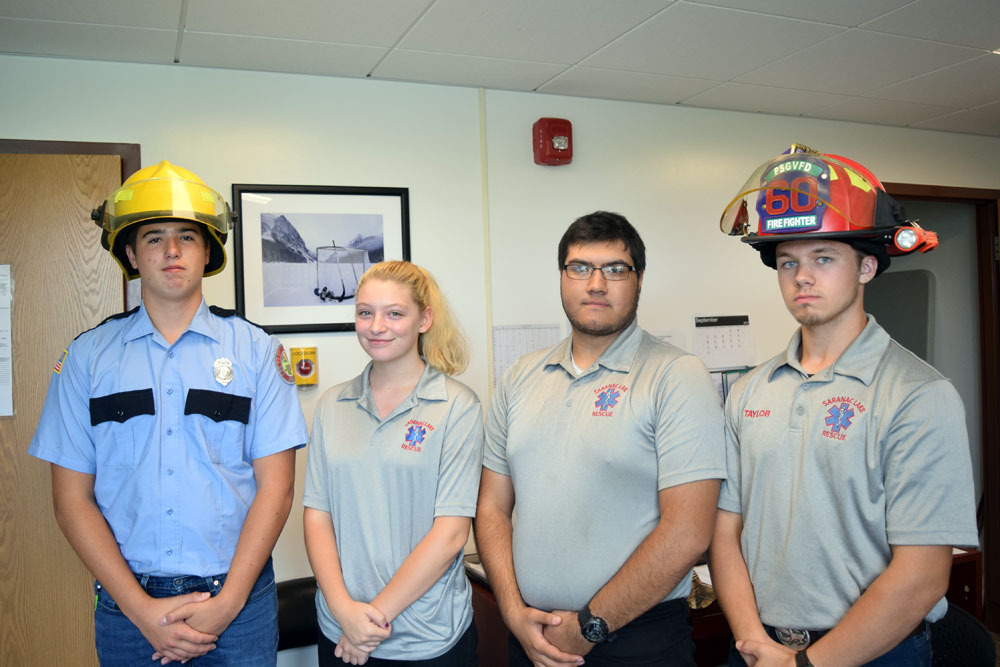 SARANAC LAKE — In the seconds and minutes of silence dedicated to remembering those lost in the terrorist attacks of Sept. 11, 2001, four students at Saranac Lake High School can think of those whose ideology they’re in sync with: those who serve.

Logan Branch, 16, Keegan Tyler, 16, Alexis Johnson, 16, and Taylor Samburgh, 17, wore their uniforms for the local fire department or emergency squad. They joined for several reasons — to serve their community, to find purpose in their work and to step into the line of danger for others’ sake — but one moment they weren’t even born to see has convinced them it was the right choice.

“My Dad brought me into his room, and usually when I’m in there, it’s personal,” Tyler said. “It was quiet, and he was just explaining to me all the stuff that happened and how he was kind of scared because he didn’t know what was going to happen after that.”

Tyler remembered thinking about the disaster.

“It just kinda kept me up at night,” Tyler said.

Branch was also 8 when he learned about 9/11. It was a shock. He said he didn’t know how to handle it then.

“I understood it was a bad thing,” Branch said. “I just didn’t understand how bad it actually was.”

Johnson was told about what happened before she left to see New York City with her family. She said she remembered being scared, but when they went, she said she wanted to see the memorial as opposed to seeing a play or a museum.

“Not all of it set in until I stepped foot into the memorial and looked at everything, like all the names, like all of it,” she said. “It was crazy.”

Samburgh also first experienced 9/11 by seeing the memorial. He said he was too young to understand what he was seeing, why it was there and that many people died there.

“But I do remember, when we were going in to get our passes and stuff, I saw a lot of mangled fire apparatus and different firefighting objects that were mangled and just destroyed,” he said. “And when we actually got in and were just walking along where the towers stood, it was just stunning because they were so big and it was just dead quiet in there. You’re in the middle of the city, and it’s just quiet.”

He said that was 10 years ago, but he remembers it clearly. He remembers a walkway with boots from some of the fallen firefighters.

Each said the actual events of 9/11 were hard to understand, but they appreciated the severity of what had happened. They learned it through the faces of those who had witnessed the events directly in front of them or on television. Samburgh said he remembers his parents’ faces when they told him.

“When they would talk about it, their facial expressions would go from being happy and joyful, and then they’d start frowning and get really, really upset,” he said. “I think overall it just impacted me. As I said, I was young, and I didn’t understand why they were so upset over this. I couldn’t really comprehend it.”

Johnson said she remembered her music teacher when she spoke to them about what happened. The coldness in her face. The sadness. The teacher had family who died in 9/11.

They said they’re aware of how the United States was a less anxious place before and how the attack changed much of that.

“And kinda after that, it was all metal detectors, schools got locks and all sorts of other stuff now that makes the students feel safer, but in my opinion, regardless, there’s still a way that somebody could do something,” Tyler said.

They feel they live in a world and an America that’s more worried. On Wednesday at 10:45 a.m., the school had a safety drill where everyone had to make their way to the gym. It was a moment that took them out of their day and brought the presence of danger back into their lives.

Each wears a pager that signals if there’s an emergency in the community. When asked how often they worry something could go wrong, Branch said, “every time I hear my pager go off.”

Johnson said the worry first started to sink in when she heard about school shootings. Some of them have kits for treating gunshot wounds in their backpacks. They’re ready. Danger can come at any time.

These teens said they decided to choose this path and step into the danger for their community and for themselves.

“It gives me a feeling that I’m doing something good and that it’s making a difference,” Branch said.