J. Patrick Barrett presides over a March 2014 meeting of the New York State Olympic Regional Development Authority Board of Directors, of which he was chair from 2011 until his death. (Enterprise photo — Matthew Turner) 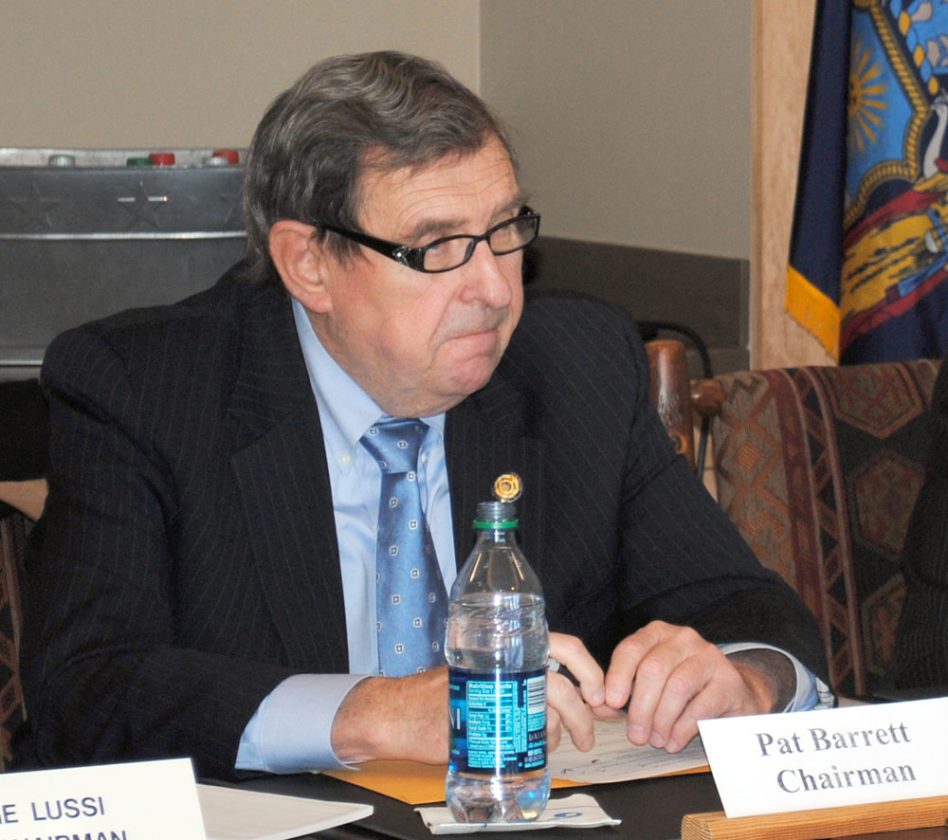 J. Patrick Barrett presides over a March 2014 meeting of the New York State Olympic Regional Development Authority Board of Directors, of which he was chair from 2011 until his death. (Enterprise photo — Matthew Turner)

LAKE PLACID — J. Patrick Barrett, a leader here and around New York, died of leukemia Monday morning at his Lake Placid home after a week of visitations from his family and friends.

Many people knew Barrett, 82, of Mirror Lake Drive, as the former chair of the state Republican Party, the current chair of the state Olympic Regional Development Authority or simply as “Pat,” and they remembered him and lauded his accomplishments for the North Country.

Born in Malone and raised in St. Regis Falls — his mother grew up in Tupper Lake — Barrett lived in Syracuse for a while and made Lake Placid his home after his stint as state Republican Party chairman from 1989 to 1991. He stepped down from that post after his party ran political novice Peter Rinfret against Gov. Mario Cuomo and lost badly.

Barrett was two-time chairman of ORDA’s Board of Directors, from 2011 until he died.

In his life, Barrett was also a veteran of the U.S. Army, a businessman heading Fortune 500 companies and the GOP chair for Onondaga County. He grew up poor and became a millionaire, at one point serving as head of the Avis car rental company. As state GOP chair he spurred campaign fundraising by donating $370,000 of his own money in a single year, according to an Associated Press report. He was in consideration to be National Football League commissioner in 1989 and ran for governor against Mario Cuomo in 1994, dropping out of the race when it became clear he would not get key support. He later became a supporter of that race’s victor, George Pataki. 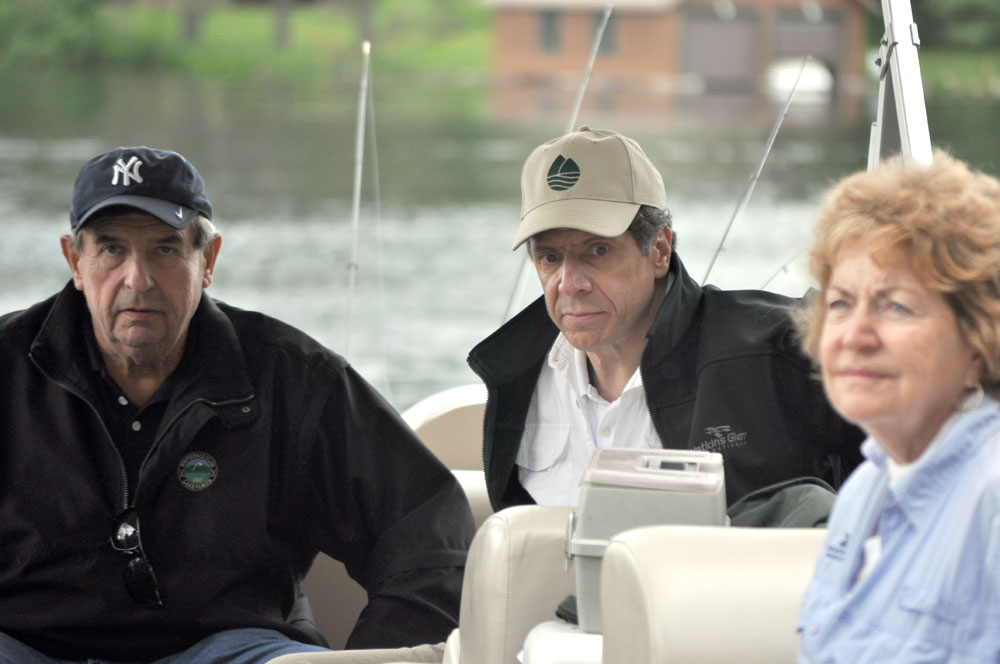 Onondaga County District Attorney Bill Fitzpatrick said he has been a close friend of Barrett for nearly 40 years. Though he said his friend lived a larger-than-life life, he said Barrett was casual in everything.

“That was the phrase you heard most from him, ‘Call me Pat,'” Fitzpatrick said.

He said “Pat” would tell that to everyone, even when the two would meet CEOs and politicians in New York City.

“People would walk up, they’d see Pat with jeans and a baseball cap and go, ‘Hey, can you guys tell me where I can find Pat Barrett?'” Fitzpatrick said.

Fitzpatrick said it was Barrett who convinced him to run for district attorney. He gushed about his friend, saying he was simultaneously “one-of-a-kind” and “a regular guy.”

He said Barrett loved Lake Placid so much, among their friend group in Syracuse, it was known as “Lake Pat.”

“He was as generous and as kind to his good friend Governor (George) Pataki as he was to an usher at Madison Square Garden,” Fitzpatrick said.

He tells a story of a night at a Manhattan speakeasy, the 21 Club, when Barrett was dining with then-Gov. Mario Cuomo. The governor had gone to the washroom and was chit-chatting with the washroom attendant, a big guy with a booming voice who was known as “the Reverend,” because he was ordained. When Cuomo asked if he would have the Reverend’s vote, he responded that he would, unless Barrett ran.

“(Cuomo) sits down, and he looks at Pat, and he goes, ‘How much did you tip that guy?’ and Pat looks at him and says, ‘a lot more than you, Governor.'”

Fitzpatrick said Barrett was good friends with both Cuomo governors, as well as Pataki.

“Not surprisingly, he did not get along too well with (former governor) Eliot Spitzer,” Fitzpatrick said. “Pat just had good judgment.”

Fitzpatrick said he saw Barrett last on Thursday, Aug. 29. Mere days earlier, Barrett had been diagnosed with leukemia. Fitzpatrick said Barrett’s six living sons were all there and that Barrett died in his sleep.

“I am saddened by the passing of my friend and Olympic Regional Development Authority Chairman Pat Barrett,” Gov. Andrew Cuomo wrote in a statement. “His distinguished career in both the public and private sectors made him an incredible leader and Chairman. In addition to being Chairman of ORDA, Pat worked with some of New York’s finest private universities serving as a Trustee at Siena College and as a Trustee Emeritus of Syracuse University.

“On behalf of all New Yorkers, I extend my deepest condolences and sympathies to Pat’s friends and family. We will truly miss Pat’s leadership and service to our great state.”

“Pat was a proud son of the North Country who made his mark in Syracuse and upon returning home, dedicated himself to ensuring Lake Placid remained one of New York’s premier destinations for visitors from around the world,” current state Republican Party Chairman Nick Langworthy wrote in a press release. “On behalf of the New York State Republican Party, Erin and I offer our condolences to the entire Barrett family.”

ORDA President and CEO Mike Pratt said in a post on the Lake Placid Olympic Sites Twitter page that Barrett “was instrumental in our growth and success” as a two-time chairman of ORDA’s Board of Directors.

“This is a profound loss; his leadership will be sorely missed,” he added.

“Pat Barrett commanded the attention of everyone in the room. He would tell stories of his life, often as they related to a current situation, or sometimes just to share an experience,” Pratt said in a later statement. “He was very proud of the Chairmanship and CEO titles, but he talked about his bartending jobs just as much. He enjoyed his community interactions and participated in community parades and holiday celebrations.

“A lot of his stories were about the people that made an impression on him. These included priests, bar patrons and co-workers. Pat loved history, especially World War II General Patton. Pat was very generous of his time, knowledge and leadership skills.”

Barrett was also responsible for making ORDA remove former state Assemblyman Chris Ortloff’s plaque from the Lake Placid Hall of Fame, which hangs on a wall in the Lake Placid Olympic Center. Ortloff, who grew up in Lake Placid and was inducted into the local hall of fame in 1998, has been serving federal prison time since his 2010 conviction for planning to have sex with underage girls. In early 2013, an Adirondack Life magazine column questioned why his plaque was still in the hall of fame. Upon hearing about it, Barrett ordered the plaque taken down immediately, and it was.

“It’s just common sense,” Barrett told the Enterprise at the time. “The day he was convicted, it should have come off that wall. That’s a state facility, and I’m the chairman of ORDA, and I just decided we’re taking it off, and that’s it. I didn’t consult with anybody or anything. Pretty straightforward, isn’t it? That’s because I’m from St. Regis Falls.”

“I remember calling him when I first wanted to run for the Assembly and getting his support,” state Sen. Betty Little said.

Little, R-Queensbury, got to have a bit of a closer meeting in 2013, when she set out on Lower Saranac Lake in a pontoon boat with Barrett and Gov. Andrew Cuomo for her “first and only” fishing trip. She said Barrett was always there when the governor was in town, even though the two were from different political parties, and that Barrett always got state funding for ORDA.

Little noted that Barrett has helped usher in the largest-ever infusion of capital cash into ORDA in the past two years, a total of $140 million. She also said he helped keep the USA Luge association in Lake Placid when it considered leaving in 2015, and that he played a part in keeping the North Country as a competitive ski area.

State Assemblyman Dan Stec, R-Queensbury, said Barrett’s service to politics and the North Country was inspiring to him. Stec said they met briefly a couple of times over the years.

“He just poured his heart and soul into his love of the North Country, specifically the Adirondacks, specifically Lake Placid,” Stec said. “As a Republican, I have an appreciation for what he did for the state GOP. That is a hard role to fill for any state chair of any party.”

He said Barrett helped form the aspirations and path of ORDA in the past eight years he served as the ORDA chairman, maintaining many options for the organization’s future.

“By just making sure that he was ‘keeping the flame,’ if you will … he was keeping the option (to host future events) alive, “ Stec said. “He did it well, and he made a difference. At the end, that’s all any of us can hope for.”

The M.B. Clark Inc. Funeral Home in Lake Placid is in charge of arrangements and the service date and time will be published at a later date, as arrangements are incomplete at this time.