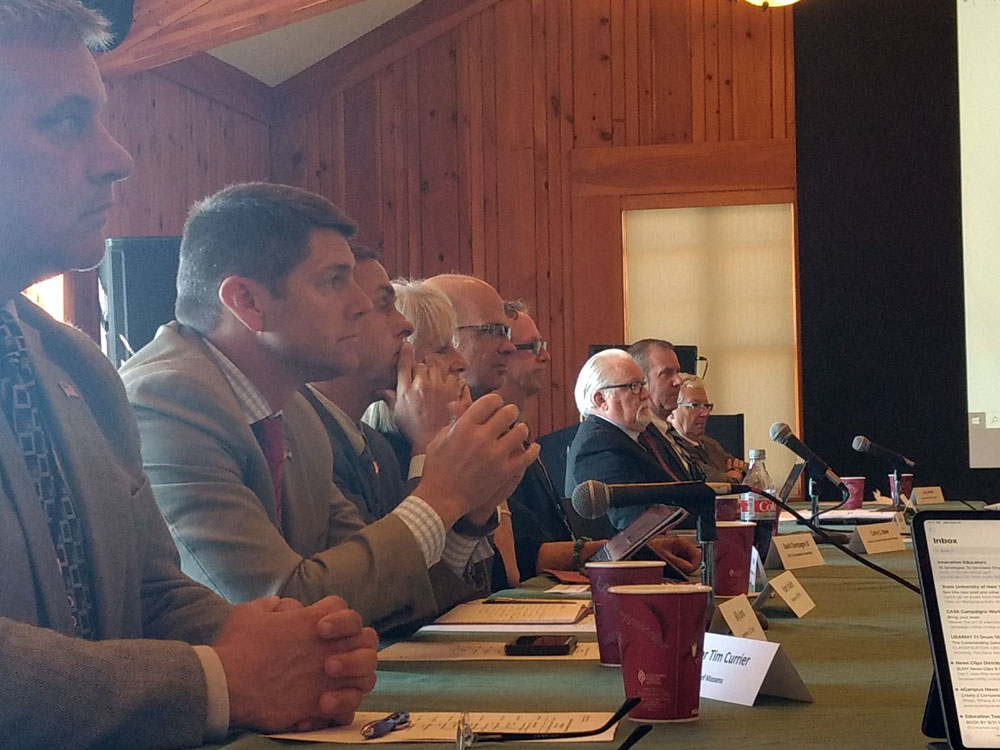 Meanwhile, the NCREDC hasn’t yet announced this year’s priority projects for state grants.

At the meeting at Paul Smith’s College NCREDC co-chair James McKenna — who is also CEO of the Regional Office of Sustainable Tourism — said the council has scored the 184 grant requests that were submitted this year, and that they will be sent to the state Oct. 1.

Following reports on the progress and success of NCREDC projects, Jones, D-Plattsburgh, brought up the lack of employees, an issue he said is critical to the future of the North Country. The Enterprise called this employee shortage a “labor gap” in a 2018 series.

“It’s sorely, sorely needed here to train people, to get them into those jobs, to find people,” Jones said. “We are struggling, struggling to find people. Every business sector, every organization in my district, as well as others around New York state is suffering with this. We’re getting to almost crisis levels.”

Jones said this is a universal problem, and national statistics show a labor gap across the country. For the past 16 months the number of open jobs has been higher than the number of people looking for work.

“Every business that I visit, every single business, their number-one concern is not taxes or state regulations — which I’m shocked when they don’t say that,” Jones said. “It’s the labor. It’s the workforce. It’s the only thing they want to talk about. … we have businesses closing in my district, not because they’re not busy but because they can’t get the labor force.”

Jones spoke in the importance of solving this issue, using disastrous terms to describe the outcome he hopes to avoid.

“It’s great that we’re all doing all this work and we’re getting great projects done, and I’m happy to be a part of it for the last several years. But if we don’t have the individuals working in these businesses and these groups, I don’t know. This is going to be the next tidal wave.”

Kate Fish, the executive director of the Adirondack North Country Association, said one of the causes of this lack of workers is a lack of affordable housing in the region.

Greg Hart, the North Country regional director of the nonprofit Workforce Development Institute, said he is part of a group addressing the issue by looking at employing younger populations.

“We’ve looked at out-of-school youth, we’ve looked at in-school youth as really important talent pipelines for our employers,” Hart said. “We’re seeing a lot more engagement on the part of the business community with high schools and with BOCES and with pipeline programs, because that’s where the workforce is; that’s where the potential workforce is.”

Cali Brooks, president and CEO of the Adirondack Foundation, added that in the Tri-Lakes, there are efforts to get local kids into the tourism industry, which needs a large employment base in the area.

SUNY Canton President Zvi Szafran pointed out that colleges draw people, and that the North Country loses populations each year to colleges outside the area. He said the North Country needs to be able to retain the kids that grow up in the area, and that it can use its colleges to draw more people in.

Paul Smith’s College President Cathy Dove added that replenishing a youthful workforce can solve some of the area’s other problems.

“College is … maybe the best way to attract young people,” she said.

Jones was also asked about his new role on Gov. Andrew Cuomo’s Upstate Cellular Coverage Task Force, which held its first meeting on Sept. 10. He said the task force will meet a couple more times in October and added that solving the North County’s broadband internet problem is “going to be a lot of work.”

Jones said the group’s first priority is making sure the major roads are covered by cell service. He said the state is hiring a consulting firm to drive around, collect data and create an accurate coverage map. He and fellow task force member state Sen. Betty Little, R-Queensbury, have said the maps the state has now show more coverage on roads than is actually there. They said the evidence is in the dropped calls.

“I’d question people at the broadband hearings and cellular hearings when they’d point to the map and say, ‘Oh, you’ve got coverage there,’ and I’d say, ‘No. I live there,'” Jones said.

McKenna said the creation of the broadband task force came from discussions on the issue at NCREDC meetings over the years.

“I think that’s a great example of how this bubbled up through the regional council for a couple of years, not the governor’s office grabbed hold of it and they’re implementing, they’re going to solve it.” McKenna said.