The first wave of paddlers sets out from Fish Creek campground on Sunday morning for the final day of the Adirondack Canoe Classic, also known as the 90-Miler. (Enterprise photo — Justin A. Levine) 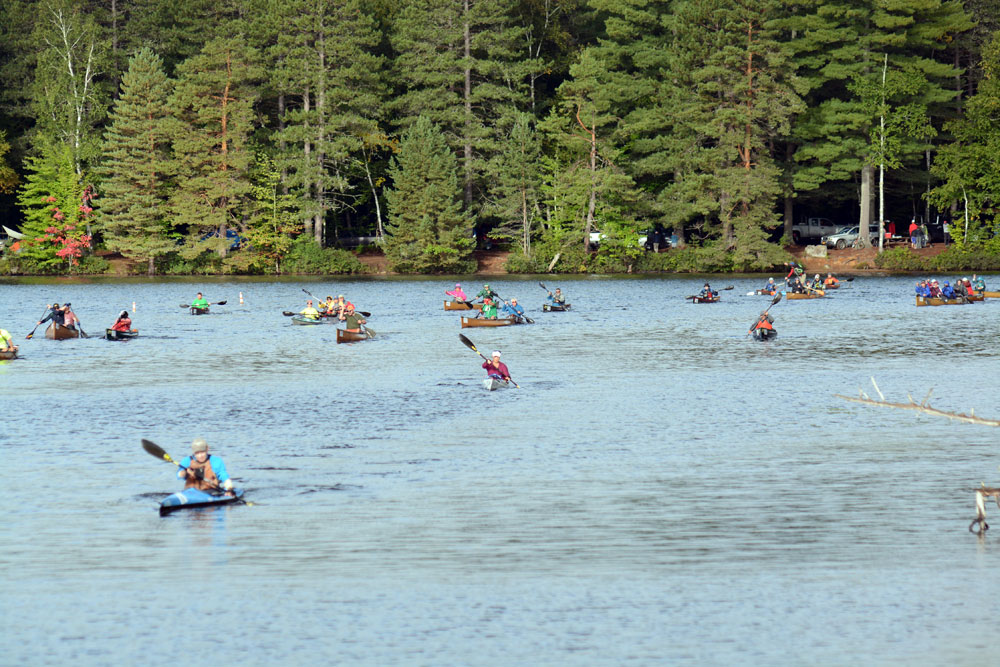 The first wave of paddlers sets out from Fish Creek campground on Sunday morning for the final day of the Adirondack Canoe Classic, also known as the 90-Miler. (Enterprise photo — Justin A. Levine)

SARANAC LAKE — The Adirondack Canoe Classic — better known as the 90-Miler — arrived in Saranac Lake on Sunday as about 250 boats finished the three-day race on the shore of Lake Flower.

The 90-Miler is in its 37th year, and began on Friday in Old Forge. After paddling to Long Lake on Friday, paddlers then went from Long Lake to Tupper Lake on Saturday, and finished up the race by going from Fish Creek campground to Lake Flower on Sunday.

Hundreds of boats and paddlers raced in everything from stand-up paddleboards to common canoes to 8-person voyageur canoes. Race organizers said everything went off without a hitch.

“There’s probably seven or eight colleges represented,” organizer Brian McDonnell said. “So there’s some young college age kids in the event, but this is the 37th run and there’s a generational effect happening. So there’s young families coming into the event, or the next generation is coming in.

“And the word is spreading that this is a cool race to do, so they come.” 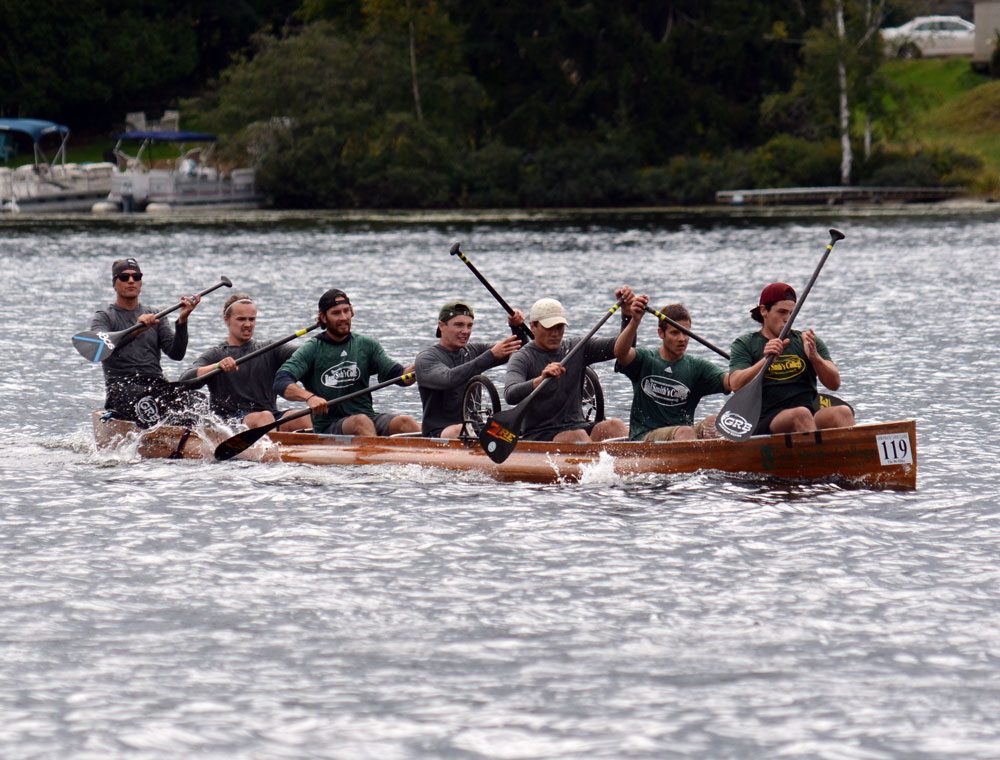 McDonnell said between 150 to 200 of the 250 boats entered in the race are first-timers, but added that there’s a Gold Canoe Club, made up of about 75 people who have done the race 20 or more times. These include Holly Crouch, who has completed the race 36 times, only missing one year due to being on military duty in Afghanistan.

McDonnell added that as the race has grown, so has the community that makes up the paddlers, their support staff and the volunteers along the route.

“There’s a real community that’s developed, so there’s people that come year after year,” he said. “I would say that a lot of the people that are in the Gold Canoe Club or paddle a lot are ambassadors for the race, and so they just keep bringing new people here.

“But also you’ll see people that this is literally the only event they do. We have a huge cadre of volunteers and organizations that support the event, and it’s been phenomenal.”

Jordanna Mallach, who took on logistics duties this year despite not spending much time on the water herself, said the volunteers set the 90-Miler apart from other canoe races. 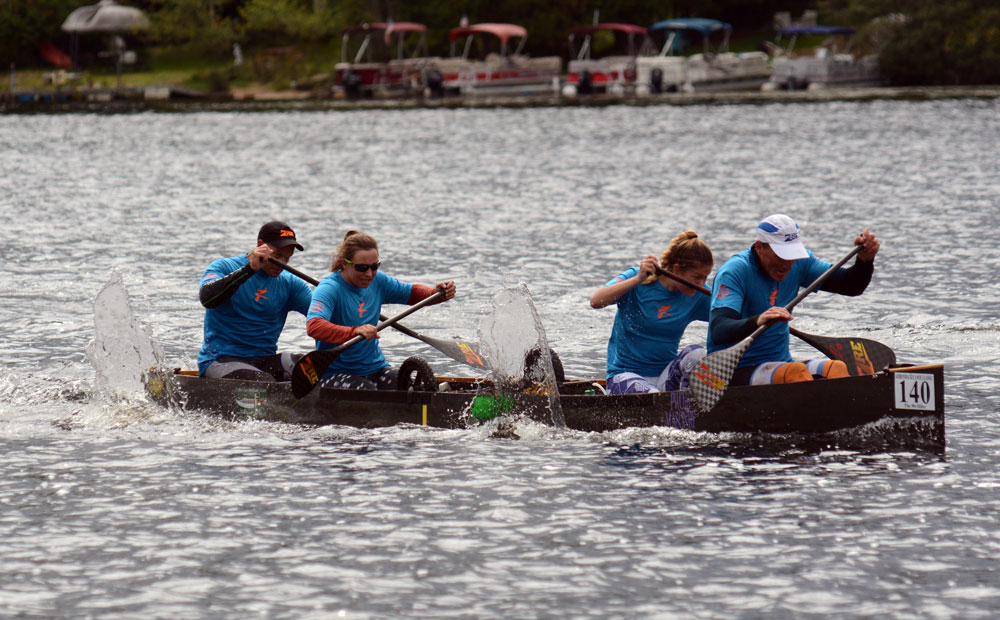 “The support we get from every community we’re in — whether it’s the town employees, owners who allow us on their property or the volunteers that come out — that’s what really contributes to the success,” she said. “It’s not really one individual — aside from Brian, of course.

“But I think that’s what makes it. It’s really a fabulous group of people to work with. I’ve had a lot of laughs — a few moments I wanted to cry — and it’s been great.”

Paul Smith’s College was represented by the school’s Marathon Canoe team. Despite only having about a week to practice, the team was all smiles at the finish line on Sunday after racing in the voyageur canoe class, which has at least eight people per boat.

“I think it went pretty well considering we were in a boat full of rookies with only two people who had done it before,” said college senior Cody Evanchick, from Corning, New Jersey. “It was pretty fun. We all met up about a week before for our preseason, and coach had us paddling almost every day so by the time the 90 came, we were somewhat in sync.

“The Raquette Falls carry took a lot of teamwork and communication — it was pretty rough.”

Ann and Brian Stitt of Balston Lake were the first pair across the finish line on Sunday morning. The husband and wife said they felt pretty good after three days on the water.

“This is our fifth or sixth one together, and his 12th and my 11th overall,” Ann said. “We had to miss last year because I had a baby, so with an almost 1-year-old, I think we did pretty good. Today was good.”

When asked what made them want to do the 90-Miler a dozen times, they answered laughing, saying in tandem, “Stupidity.”