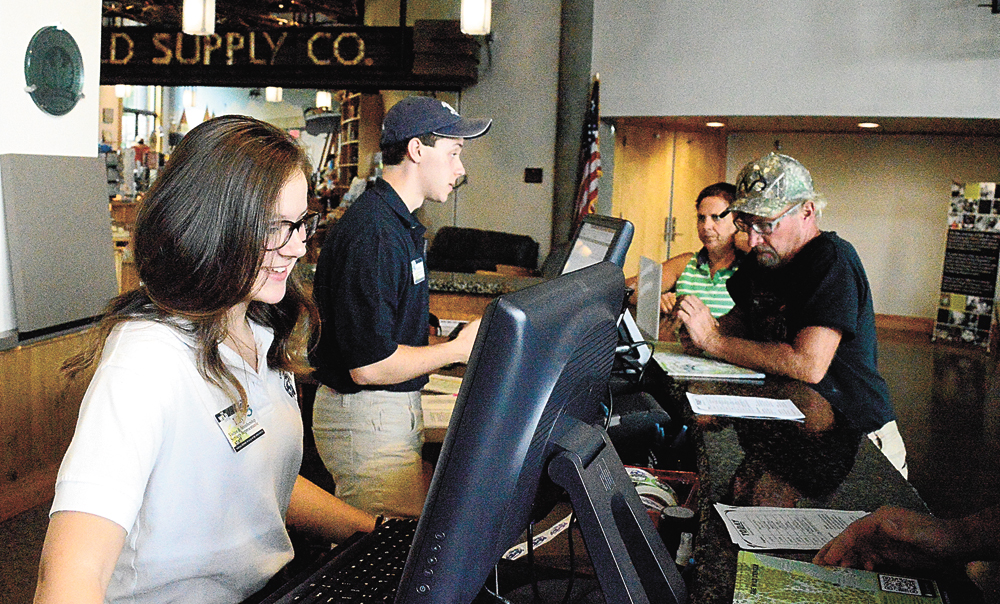 For many, Monday, Aug. 26 was just another start to a work week, but for the high school students with summer jobs around the Tri-Lakes, it marked the start of their last week of work before the school year begins.

Summer jobs are a staple of high school life; they provide a chance to earn a bit of money, start saving up for a car or college, and a way to stay busy during the months out of school. Some of the students in the seasonal workforce found out they gained knowledge from their jobs, learning even when school’s out.

Many of these kids are also balancing summer sports practice. Many will continue working on weekends when school starts back up. Many employers also said they rely on high school students to staff their businesses during the busy summer months. 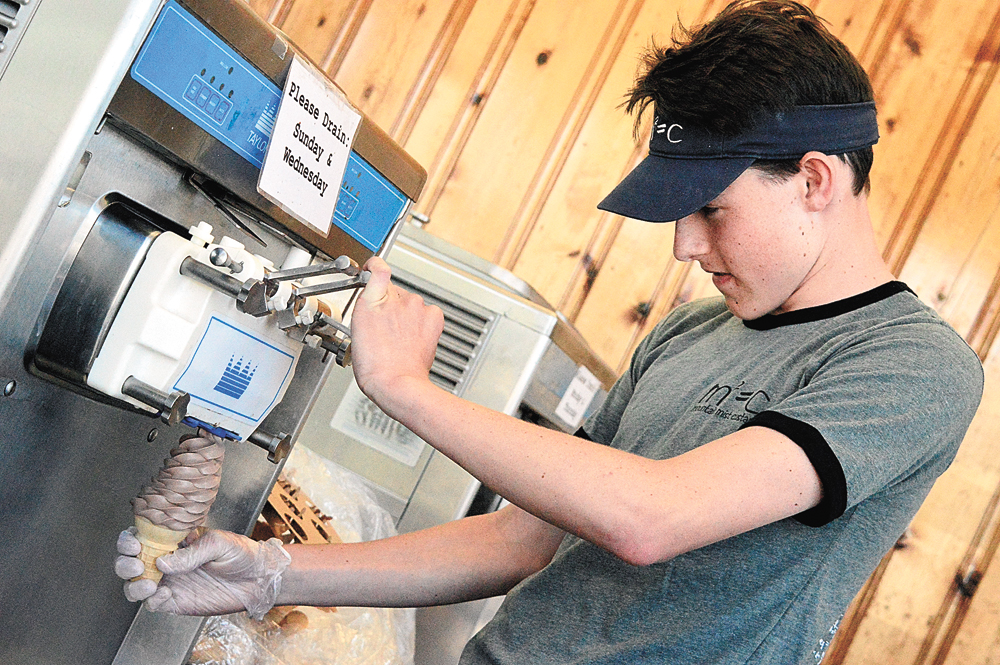 Starting at age 14, kids can get papers permitting them to work non-factory occupations during vacations or after school hours. Before that, they can get permits for newspaper carrying and certain types of farm work.

Patrick Cote, a soon-to-be senior who works at the admissions desk at the Wild Center in Tupper Lake, said he got a job at the nature museum when he needed money and realized that mowing lawns and stacking firewood wasn’t going to cut it.

Some high schoolers find employment because they want a bit more spending money in their pocket, some are looking for something to do during summer break, and some are working because their parents really did want them to “get a job!”

“I like working day-to-day; it gives me something to do,” said Tanner Foley, who works at Pirate’s Cove Adventure Golf in Lake Placid. “Plus, I don’t have to watch my siblings.”

Though many acknowledged they are sacrificing precious summer vacation days on the job, most saw it as worth the effort. 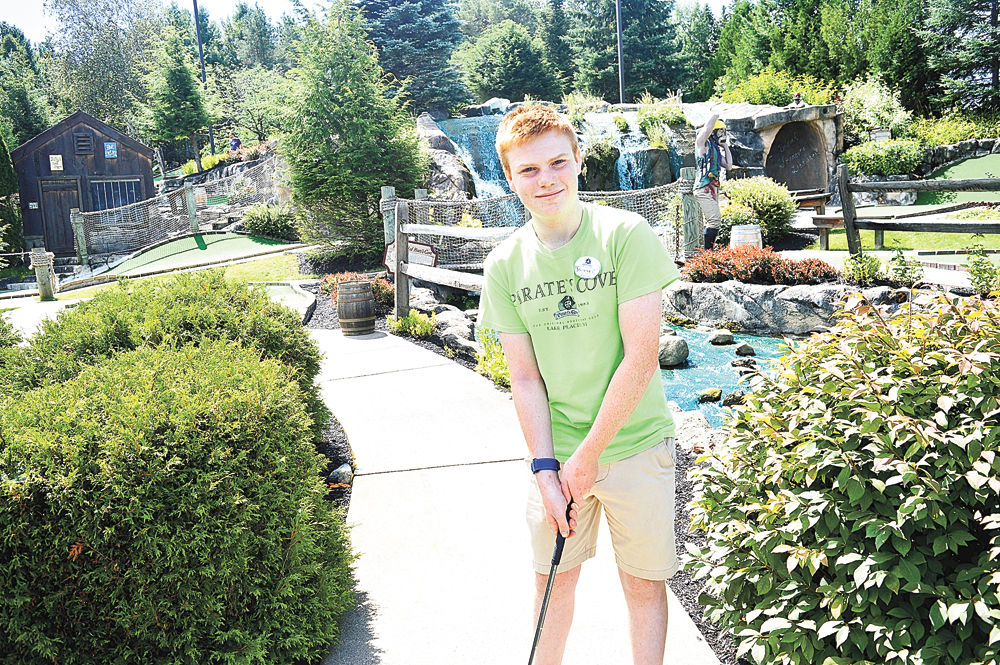 “I didn’t want to waste another whole summer,” said Logan Dominie, a teen educator at the Wild Center. “I wanted to make it … worthwhile.”

Kelsey Leeret, 16, a soon-to-be junior busing tables at the Hotel Saranac, said she believes it’s important for kids to work over the summer. It helps teach them the value of money, a work ethic and character. Also, she said, it helps keep them from relying on their parents.

“You’re going to have to start at some time,” she said.

Leeret said the job has helped her with talking to people, something echoed by many of the other students workers. 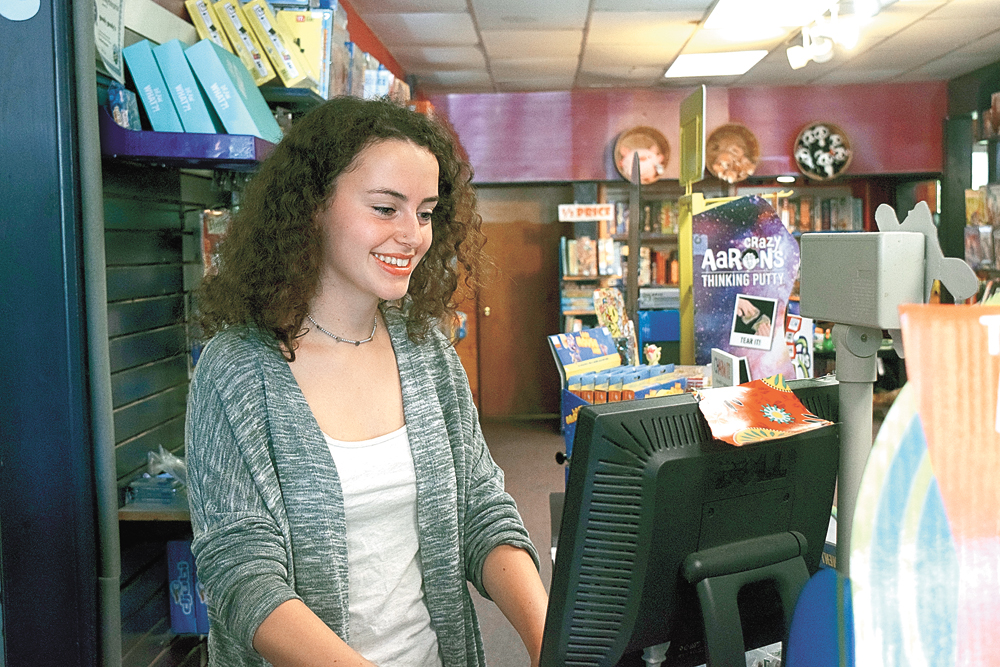 The joy of working

The temperature was in the mid-70s Monday, and Andrew Fogarty, an incoming high school junior, was dishing out ice cream to visitors of the Mountain Mist Custard stand, in Saranac Lake, coming by bike, car and boat.

Fogarty said he works at the stand, owned by his uncle Jay Fogarty, 20 to 35 hours a week and enjoys meeting tourists, eating ice cream and chilling in the shop’s cool atmosphere.

Though it’s a family business, he said he hounded Uncle Jay for the job three years ago.

“I was looking for a summer job, and I kind of annoyed him for it,” Fogarty said. “Freshman year, there wasn’t that many people that worked, and now like everyone’s working during the summer. 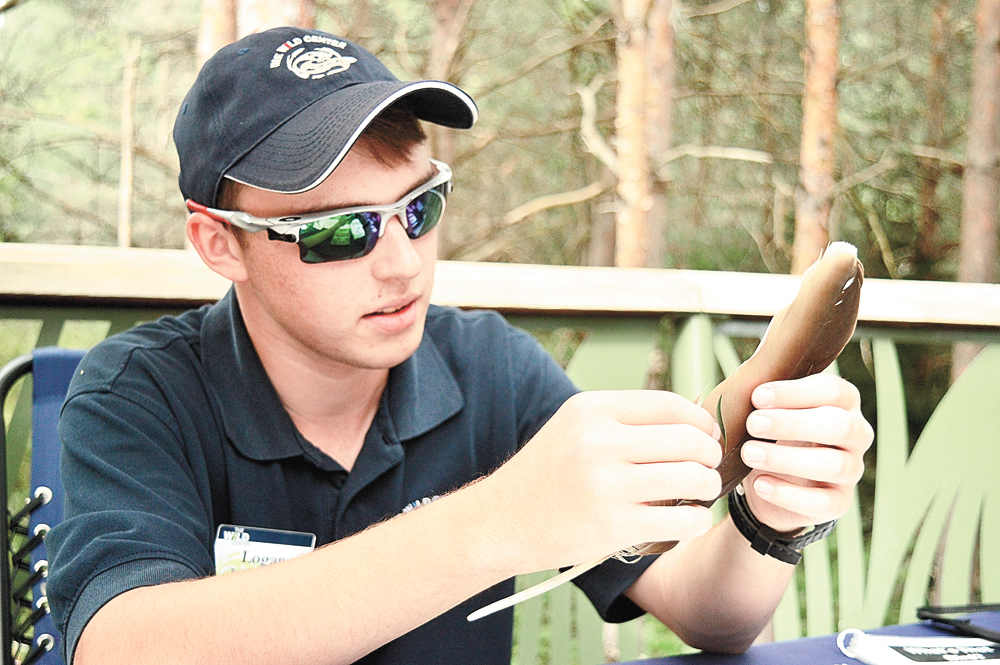 “I actually really enjoy working here, so I try and work as much as I can. … I work a lot of hours trying to make as much money as possible before the school year starts,” Fogarty added. “But I’ve also been swimming and doing all this other stuff because you’ve got to enjoy summer as much as you can.”

When he finishes working, sometimes he jumps into Lake Flower right off the dock behind the ice cream stand. He also goes running to train for the cross country team.

He said it is worth it for him to sacrifice some summer days to earn a little money.

“I definitely think it’s more enjoyable having money and working for it. It feels more reassuring,” Fogarty said. “And it’s always fun because ice cream is kind of a fun food to deal with.”

Cote, who works full-time at the Wild Center, said he is still able to find time to enjoy his summer when he’s not working, biking around town, hanging out with his girlfriend and starting to play long sessions of Dungeons and Dragons with friends.

He’s a senior and said all his friends have jobs as lifeguards at Little Wolf Beach, cashiers at stores or caretakers at camps.

“I really can’t think of anyone in my grade that doesn’t have a job,” Cote said.

Pros and cons for employers

Summer months are the busy ones for business in the Adirondacks, which is perfect for employers because high school students are available when they’re needed most.

At the Wild Center, the majority of employees working in admissions, the cafe and the gift shop are students.

There are also college students at the museum, but they go back to class earlier in August, while the Wild Center is still in its busiest time. The high school students are essential then.

Employers at Mountain Mist and Pirate’s Cove said they experience the same departure near the end of the season.

“It’s important to have a dedicated core group. We wouldn’t be able to operate without them,” Gunn said.

Not everything is beneficial for employers, though. These high schoolers on break are still busy in the summer with sports.

At Pirate’s Cove, Foley was running late for his shift because soccer practice went long. Fortunately, things are flexible there. The mini-golf course also employs two lugers who have practices even in the summer.

Another obstacle for employers is that kids under 16 are not allowed to work late at night. Also, some families go on extended vacations, and the kids might be away from the job for a while.

Sometimes the job is the first they’ve held, and they might not be confident in their ability to work yet. Pirate’s Cove manager Scotty Marshall said she sees this as both a pro and a con. She likes to mentor her employees and help them build their confidence.

“That to me is kind of the fun part as an employer, to develop those kids,” Marshall said.

She said she tries to impart common sense, critical thinking and social skills in the high school students working for her. She said she often ends up considering them like family.

“I love it. I actually have kids who are now young adults with families who come back and visit me,” Marshall said.

This was the case with Foley, who she said “started out as a very shy young man.”

“He’s a stellar employee; he is one of the best employees I’ve ever had,” Marshall said. “I’ll leave the business alone with him because he’s so good.”

Foley said he was having a slow summer and wanted to do something different for a job. He ended up finding an opportunity to become more responsible and gain job experience.

“I have enjoyed doing this. It’s taught me a lot, and I’ve learned a lot more about people and how to handle business,” the 15-year-old said. “Normally I don’t like to talk to strangers, but here I’m opening up.”

Foley is talking with people all day long, welcoming them when they arrive, getting them the right length putter and asking them about how many holes-in-one they got. When he’s not talking, he’s out maintaining the course, fishing balls out of the water, weeding and keeping the greens clear.

Most other students interviewed for this article said their jobs helped them develop the same social skills.

Cedar Young, a soon-to-be junior, is working at Goody Goody’s, a toy store on Broadway in Saranac Lake. She found that the experience, aside from simply supplying her with cash, helped her converse with adults.

She’s helped check people out, gift wrap presents and aid customers in their search for toys and games.

Logan Dominie, a senior and teen educator on the Wild Center’s Wild Walk, said he has been going to the nature museum since he was in elementary school and took the job to learn more about nature as he educates guests.

“What really interested me was learning more about the Adirondacks and being able to pass that on to other people that come from all over the country … and other countries even,” Dominie said.

Dominie said over the summer he has developed the presentation he does at the Planet Adirondack globe inside the museum, cutting out the “fluff,” refining his spiel and getting accustomed to answering guests’ questions.

The Wild Center’s guests from other countries give employees the added challenge of needing to communicate across languages. Cote said that earlier in August he was speaking to an Arabic-speaking couple through their 7-year-old, who was translating from English.

As school starts next week, these students will return to their lives as students, but they will return a bit wiser from their stints in the adult working world.