Sanders is most popular with Dem donors, NY Times finds

Vt. senator gets most campaign donations from North Country and nationwide

A closer look at the North Country on a New York Times map shows individual donors to 2020 Democratic presidential candidates.

This map of individual donors to 2020 Democratic presidential candidates was compiled by the New York Times. 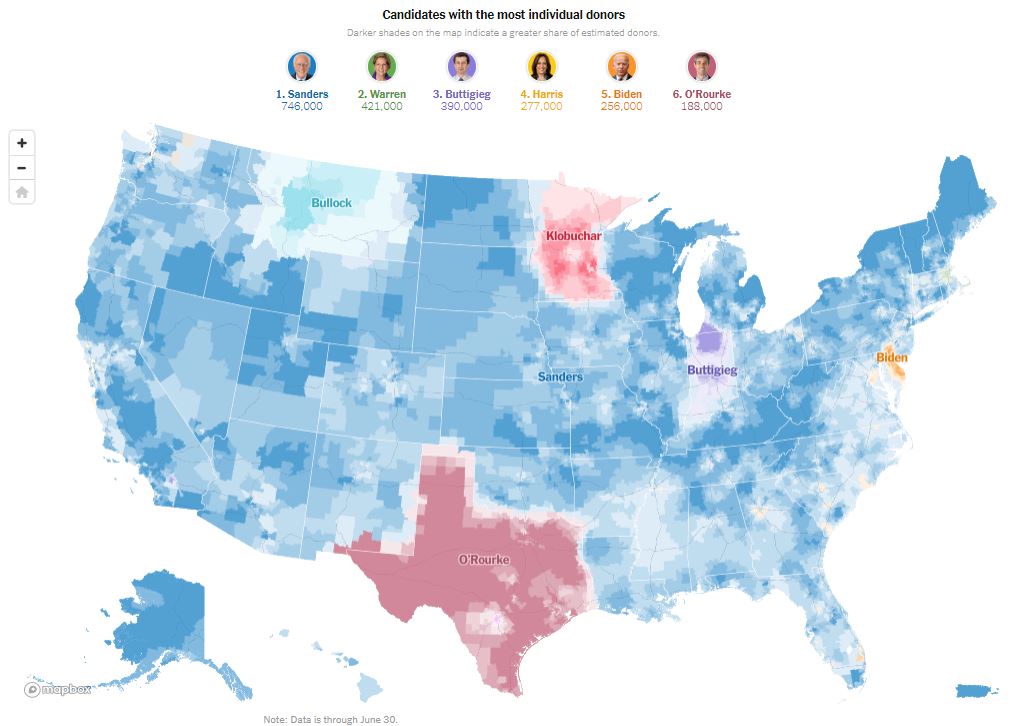 This map of individual donors to 2020 Democratic presidential candidates was compiled by the New York Times.

Following the second round of debates between the Democratic candidates running for president in the 2020 election, the New York Times has released several maps showing who has the most individual donors, highest dollar amounts and widespread appeal.

The main map charts who has the most individual donors, and it shows the North Country region to consistently support Vermont Sen. Bernie Sanders more than anyone else. Sanders also leads the other candidates nationwide in dollars raised.

This is typical of most of the candidates’ home areas. While Sanders does not represent New York, one of his two Vermont offices is in Burlington. Rep. Beto O’Rourke dominates his large state of Texas, and the vast majority of Minnesota Senator Amy Klobuchar’s donors come from her home state.

However, the map is painted mostly blue, representing Sanders, who has 745,000 individual donors. In fact, the Times also included a separate map excluding Sanders to provide a better look other candidates individual donors. Massachusetts Sen. Elizabeth Warren comes in second with 421,000 and South Bend, Indiana Mayor Pete Buttigieg in third with 390,000.

The Times’ maps were created using Federal Election Commission data and ActBlue donation reports. These two sources account for 94% of dollars donated to candidates by individuals, according to the Times. However, information about donors giving $200 or less directly to a candidate’s campaign is not available. 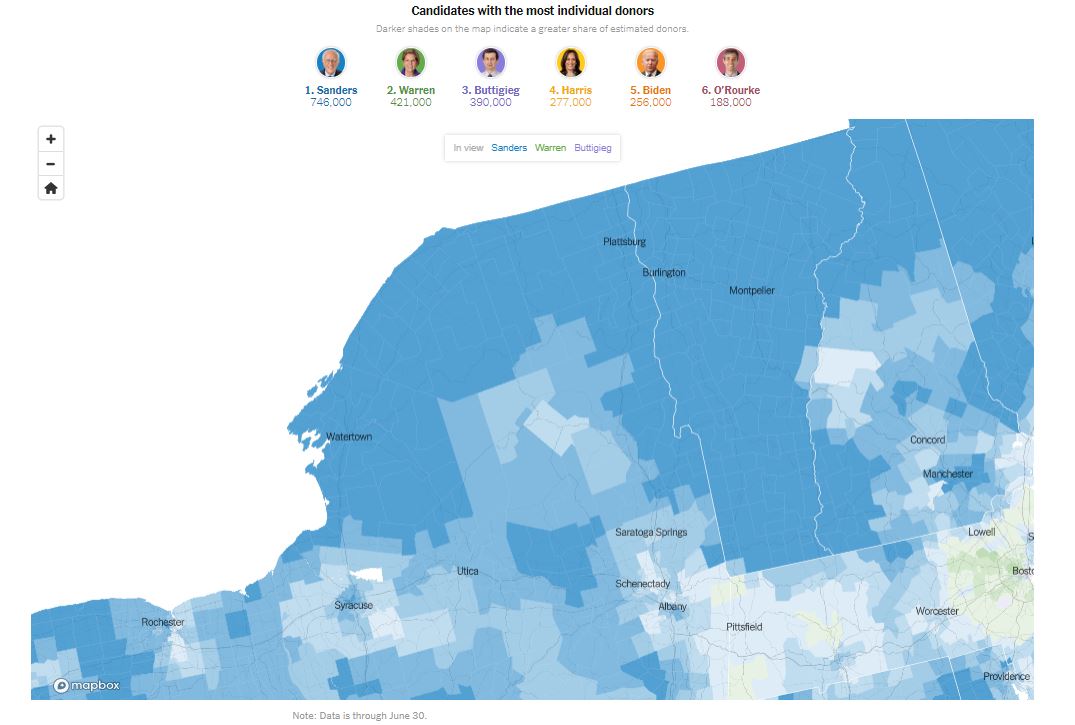 A closer look at the North Country on a New York Times map shows individual donors to 2020 Democratic presidential candidates.

Each North Country census block is individually calculated. Each includes Warren, Buttigieg or New York Sen. Kirstin Gillibrand as the second-most donated-to campaign, and some include former Vice President Joe Biden in the third spot.

In terms of dollars donated, Sanders leads again nationally and throughout the North Country. Warren dominates the second-place spot in North Country census blocks, and Buttigieg and Biden occasionally make appearances, more often taking the third spot along with Gillibrand.

The majority of Gillibrand’s 77,000 donors reside in New York, with a contingent in Iowa helping contribute to her $5 million total raised.

New York City Mayor Bill de Blasio has only 7,000 individual donors, mostly residing in his heavily Democratic city of 8 million people. He has raised $1 million, according to the Times.

Sanders was also popular in the North Country when he faced off against Hillary Clinton in the 2016 Democratic presidential primary. He took 63% of the votes in congressional distrist that spans northern New York that April. It was the only New York congressional district where he eclipsed 60%.

The maps can be seen at https://www.nytimes.com/interactive/2019/08/02/us/politics/2020-democratic-fundraising.html.