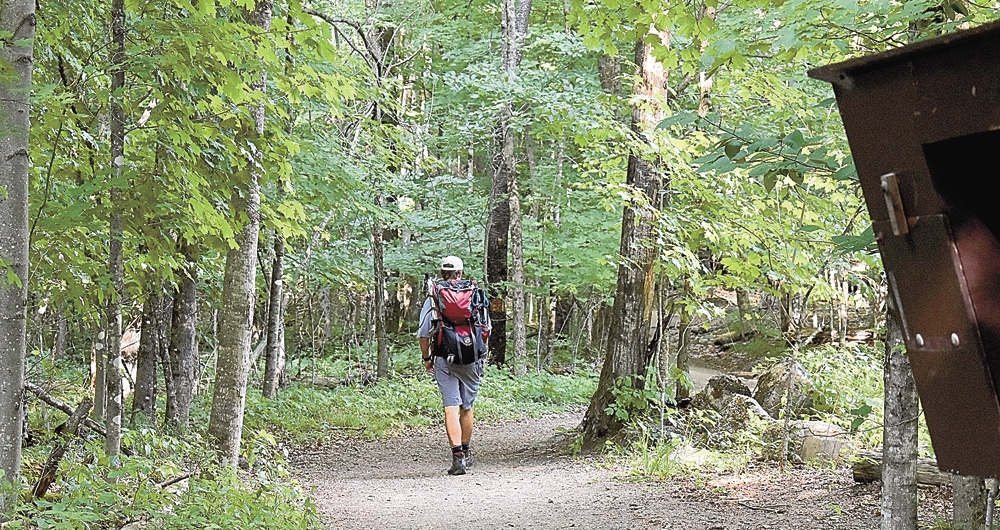 KEENE VALLEY — This past weekend 109 hikers, in at least 43 vehicles, checked in at the Rooster Comb Mountain trailhead. They came from as far away as London, England. The ones who parked legally pulled into a small slab of asphalt off of state Route 73 with a capacity of roughly 18 cars. Others may have parked illegally along the roadside.

Regardless of where they came from or how well-prepared for the journey they were, every hiker crossed the same rickety footbridge over a wetland and walked into a dim thicket of rich greenery where a small brown box holds a trail register.

Meanwhile, last week, representatives from nearly 40 state and local organizations converged on the hamlet of Keene Valley to talk parking, transportation, permitting, education and safety as hikers continue to stream into the area to hike.

Discussions at the stakeholder meeting, hosted by the state Department of Environmental Conservation, revolved around the Route 73 corridor. It’s a major artery through Keene Valley between Lake Placid and Interstate 87, and it boasts multiple popular trailheads, including Giant Mountain, Cascade Mountain, Mount Marcy and Pitchoff Mountain.

The corridor has also become a conundrum. There are many factors: steadily rising tourism numbers, a diverse web of varying ecological and management zones that make fixes complicated, what many see as a lack of resources to address long-simmering infrastructure and staffing needs to accommodate the influx, and hundreds of miles of aging trails with long stretches graded steeply, so controlling erosion is impossible. 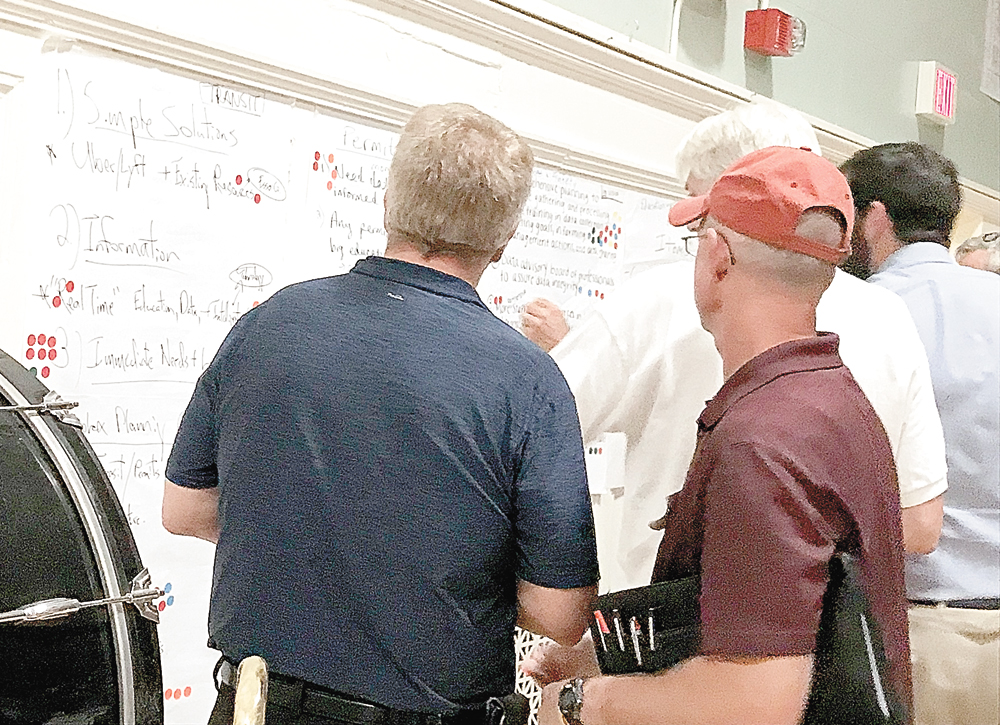 Participants in the DEC’s stakeholder meeting at Keene Central School July 30 participate in an informal “dot” poll by placing stickers by Route 73 “action items” they feel should be given the most attention. (Enterprise photo — Elizabeth Izzo)

All of these things have been on the radar of state and local officials for decades. In the High Peaks Unit Management Plan, first released 20 years ago and updated recently, many of these same issues are outlined. They’re coming into the spotlight again as the result of the roadside parking ban, the state’s subsequent enforcement of it and unintended impacts.

These changes have prompted some local officials to push for different solutions.

It was amid these discussions that an invite-only meeting was scheduled by the DEC last week to gather input from local stakeholders. As it turned out, it was supposed to be closed to the press, but this reporter was allowed in and welcomed by many officials.

The general consensus among attendees: More funding, and a comprehensive plan, is urgently needed. 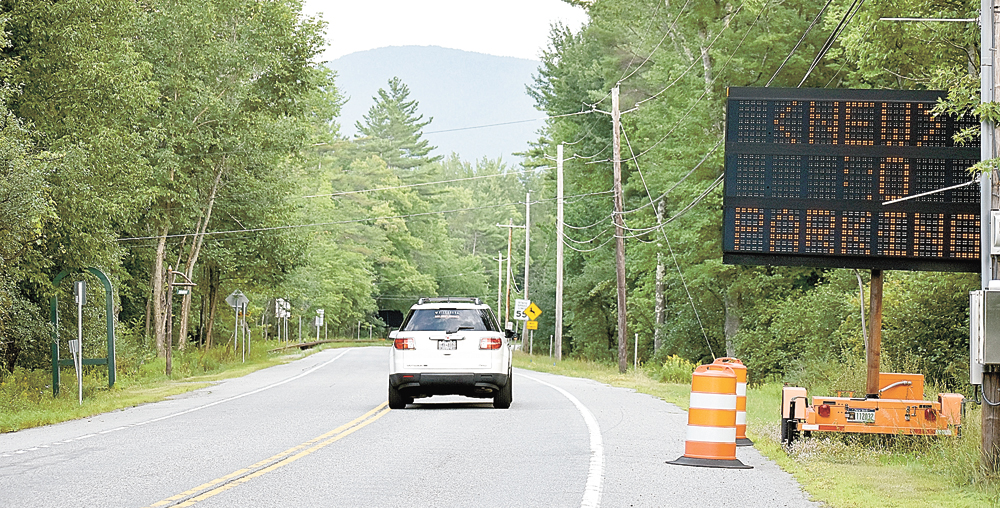 A large digital sign warning of the DEC’s roadside parking ban sits on the shoulder of Route 73 in the hamlet of St. Huberts Tuesday. (Enterprise photo — Elizabeth Izzo)

The DEC announced May 28 that roadside parking would be prohibited along a 4-mile stretch between the Rooster Comb Mountain trailhead in Keene Valley and the Chapel Pond trailheads.

The ban was put in place as a result of safety concerns. Prior to the ban, hikers could occasionally be seen parking at the roadside and walking along the narrow highway shoulder to a trailhead, according to Keene Town Board member Teresa Cheetham-Palen.

“It’s basically a parking lot that people drive 50 to 60 miles per hour through,” she said.

The DEC started enforcing the new ban shortly afterward. Between June 14 and July 12, the DEC issued 90 parking tickets with fines of up to $250, plus court fees, according to David Winchell, a DEC spokesman. About 70 of those were issued the first weekend. 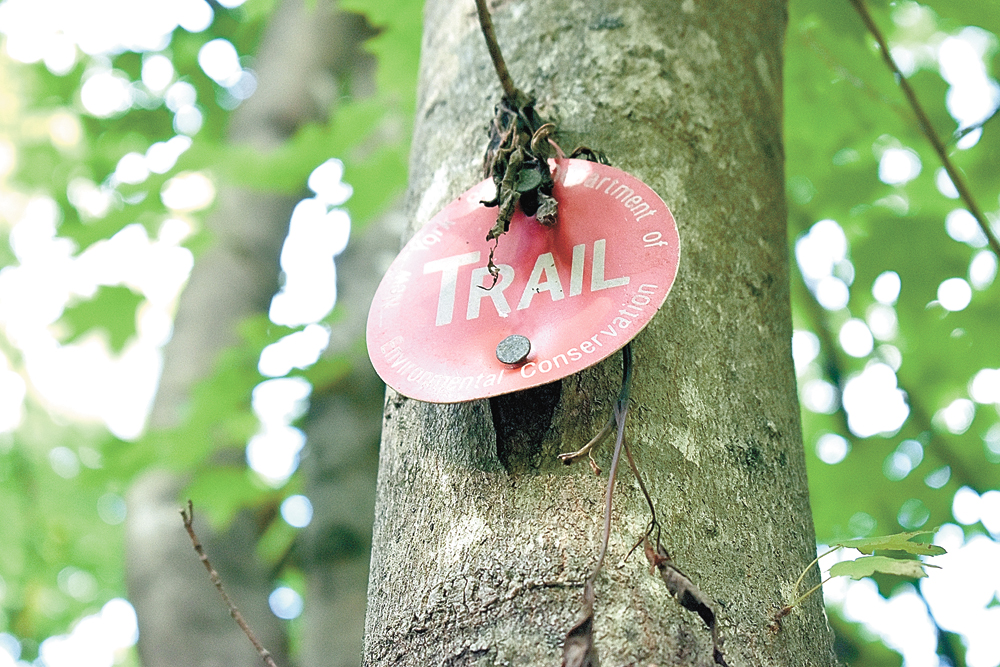 The ban and its enforcement resulted in confusion, frustration and some tension at trailheads. The overall reaction was mixed: Some felt the effort was a step in the right direction while others saw it as a money grab by the state or felt a parking alternative should’ve been implemented beforehand.

Some residents questioned why the six state forest rangers stationed in the High Peaks were the ones being asked to enforce the ban. As of last month, the State Police hadn’t written any parking tickets as a result of the ban, according to State Police Public Information Officer Jennifer Fleishman.

On June 29, the town of Keene and Paul Smith’s College announced a new volunteer-based “frontcountry steward” program, placing volunteers at trailheads along Route 73 to provide hikers with information. There are also existing part-time stewards provided by the town at the Marcy Field parking lot in Keene Valley. They are not authorized to write parking tickets.

But tourists who travel from outside the Adirondack Park to visit the High Peaks aren’t always happy when faced with a lack of legal parking, and though the stewards are trained on best practices when speaking with visitors, their interactions don’t always go smoothly.

On July 13, a couple visiting from Montreal and a frontcountry steward, who happened to be Keene town Supervisor Joe Pete Wilson Jr., were involved in a tense exchange over trailhead parking. The tourists had arrived early at the trailhead after hearing about the new parking restrictions and believed an unlined space in a trailhead lot was a legal place to park. Wilson informed them they could be subject to a parking ticket, and the discussion became heated. The exchange prompted one of the tourists, Michael Farmer, to say he’s reconsidering visiting the Adirondacks after 10 years of coming here. 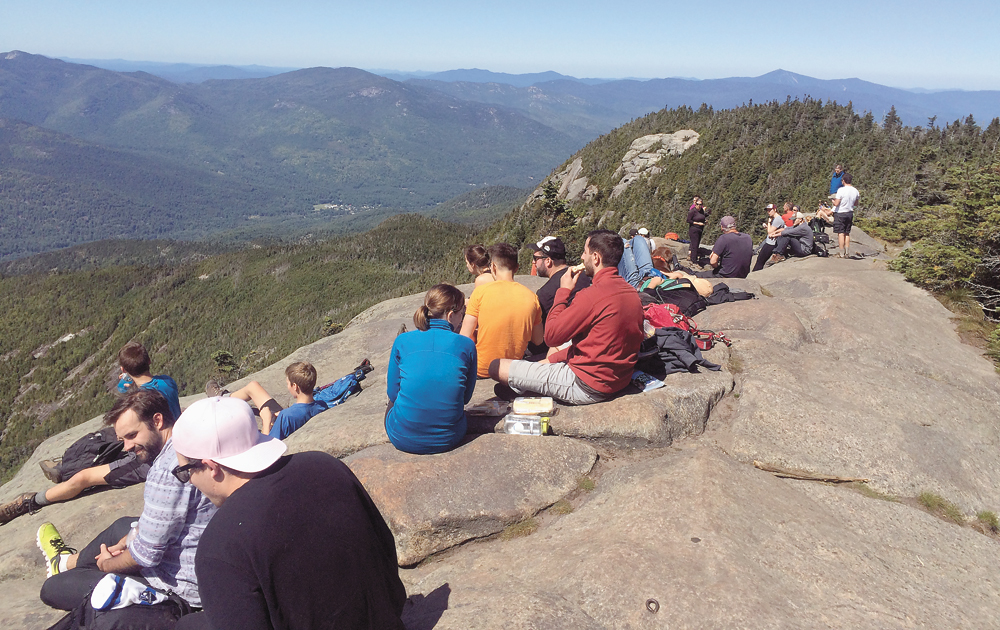 A crowd of hikers sits at the summit of Giant Mountain on Labor Day weekend in 2017. Most hikers headed to Giant Mountain park on state Route 73. (Provided photo — Adirondack Mountain Club)

Cheetham-Palen, who attended the DEC’s stakeholder meeting, said she understands the parking issue is complicated and there are multiple agencies involved in any one decision. But she was under the impression that new parking lots to accommodate the increasing influx of hikers would come before roadside parking restrictions, not after. She feels the DEC put the cart before the horse.

“It’s like, ‘There’s no parking here, but come here,'” she said. “Where’s the alternative?”

The DEC is planning to commission a transit study of Route 73 to determine whether there’s a need for hiker transportation from designated parking areas to trailheads, if current programs adequately address those needs, and what sort of transportation may be needed.

The parking lots at trailheads in the High Peaks were never meant to accommodate everyone who might visit, however.

Many of the facilities, designed in the 1970s, were built to “accommodate a desired capacity commensurate with interior use and to also, alleviate off-highway parking problems,” according to the High Peaks Unit Management Plan, released in March 1999. “This is a passive-indirect management approach to control interior use by balancing road access with the desired carrying capacity of the contiguous wilderness.”

Even 20 years ago, parking problems were routine at the Garden, South Meadow Road, the AuSable Club and along Route 73, according to the plan, which says that “in each case, the number of parked cars is often triple the desired capacity.”

Cheetham-Palen hopes the DEC will work quickly to put in place short-term fixes to urgent problems, like the parking and traffic concerns, while the department explores long-term solutions to larger issues that she feels plague the entire Adirondack Park.

“Create those new parking lots,” she said. “Make a decision on capping access.

“(The DEC) needs to come up with that number and put a system in place for when those parking spaces are full.”

She doesn’t have much faith that will happen in a short enough period of time.

“I do think the town of Keene, at this point, won’t be able to wait for that to happen,” she said.

The session’s roughly 60 participants weighed in at the end of the meeting with an informal “dot” poll to gauge which topics or action items were most important to the group.

The most popular idea, according to the dot poll, was the creation of a pilot hiker or parking permit program, which could be revised or expanded as needed.

“There was a clear consensus for taking a comprehensive approach, for dedicating new funds and for testing a permit system, even though support was not unanimous,” said Willie Janeway, executive director of the Adirondack Council.

Beyond the problems visible at the roadside, more issues are brewing in the backcountry, according to Peter Bauer, executive director of Protect the Adirondacks.

“The whole day cried out for an immediate need for change,” he said. “What was distressing about the meeting — it seems that to rebuild all of the trails in the High Peaks that need to be rebuilt, and to build new trails, would take over 150 years at current resource levels. That’s unacceptable.”

Several sections of the High Peaks trail network are “poorly located,” according to the unit management plan. There are long stretches of grade three to four times steeper than they should be, making erosion control difficult. Some summit trails, which tend to channel water and create gullies, erode faster.

DEC officials told attendees that the feedback the department received from the brainstorming session would be compiled, and the DEC’s strategies and priorities may be updated based on discussions held there.

Cheetham-Palen hopes those new strategies will be implemented sooner rather than later.

She said progress is moving forward years too late and feels Keene was left “holding the bag.”

“They closed roadside parking and didn’t offer any real alternative,” she said. “On weekdays, that might be okay. But on weekends is when it really heats up. I feel like that left the town of Keene in a position of being the non-welcomers.”

The town had boasted 1,080 residents as of 2017, and tourism is crucial to the local economy. Keene officials want tourists to feel welcome, Cheetham-Palen said.

The roadside parking restriction, paired with what she sees as a lack of alternatives for parking elsewhere, creates an environment rife with the potential for negative experiences.

“They arrive, it says ‘no parking,’ and there’s not much they can do,” she said.

Among 1,975 people who were surveyed after visiting Essex County last year, 86% said they were hiking, according to the Regional Office of Sustainable Tourism’s annual Leisure Travel Study.

The impact of tourism on the economies of Adirondack towns is immense. Among regions within New York state, tourism is most important to the Adirondacks. The $1.4 billion tourism industry is responsible for 19% of total employment here, according to a 2017 study by Tourism Economics, a global research firm. Tourism in the Catskills generates 16% of total employment.

In an interview with Vermont’s Seven Days newspaper, the former owner of the Noon Mark Diner in Keene Valley, Lola Porter, said business has dropped around 15% this summer due to the parking restrictions. She also said many weekend hikers have complained.

“They just all of a sudden implemented it and, boom, they are handing out tickets left and right,” she told Seven Days. She said it’s the equivalent of rolling out an unwelcome mat to tourists.

“If somebody gave you a $300 parking ticket, are you going to stop somewhere here to eat, or are you just going to take off?”

If visitors don’t feel welcome, they often take to social media to share their bad experiences, Cheetham-Palen said. She fears that, if a post outlining a negative experience gets shared widely, there’s potential for some dramatic impacts locally. It’s a delicate balancing act, she said — allowing visitors and protecting the natural resources while contending with what she sees as a lack of adequate funding for the DEC.

“We want people to come and have a nice time,” she said. “We want to have some way to help people adjust if they can’t get where they want to go.”

(Correction: In an earlier version of this article, the opening sentence incorrectly said the Rooster Comb trailhead is in the in the hamlet of St. Huberts. It’s in the hamlet of Keene Valley.)