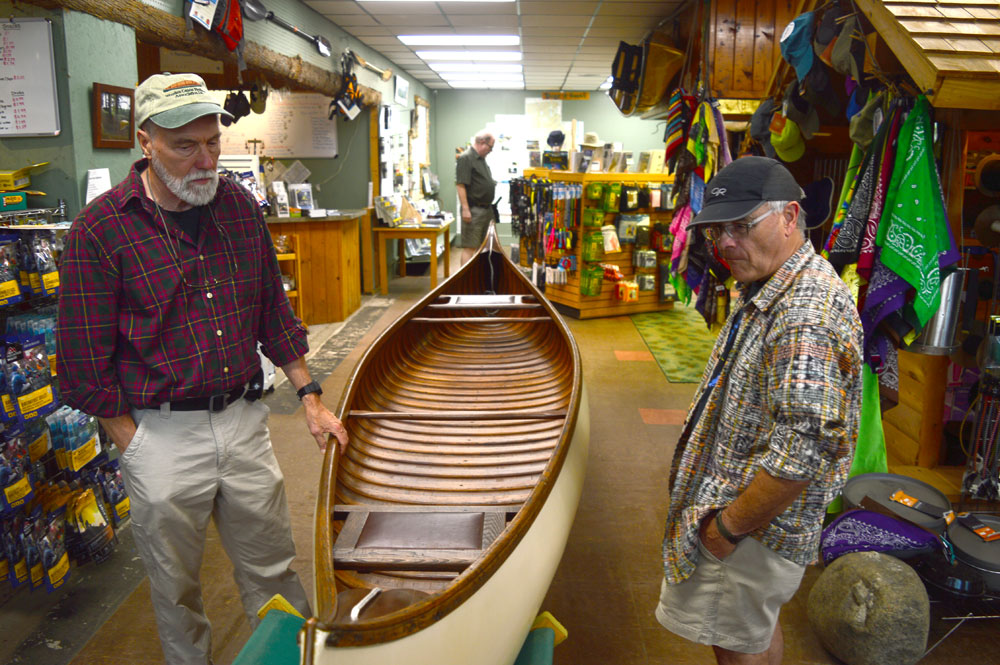 SARANAC LAKE — Author Norman Sims was at St. Regis Canoe Outfitters Friday to sign copies of his book and give a talk, but when the event began he was more interested in showing off his restored Burt-Morris canoe.

The wooden boat was built in Maine in the 1890s. Sims was going over its fine details with the shop’s owner Dave Cilley, who had just wrapped a book signing for his updated fourth edition of “Adirondack Paddler’s Guide.”

Sims, who lives in New Hampshire, said the intricate wooden canoe between them was his “show and tell” piece. He doesn’t let it collect dust in a storage room; he likes having the prettiest boat on the river. It’s also a gateway for him to talk about the history of canoes, a topic he spent seven years studying with his writing collaborator Mark Neuzil.

“Canoes: A Natural History in North America,” came out in 2017 and is the result of the two “literary journalists” diving deep into their shared hobby of paddling.

“I’ve published a number of academic books, and I’m more proud of this book than I am of about any of those,” Sims said. 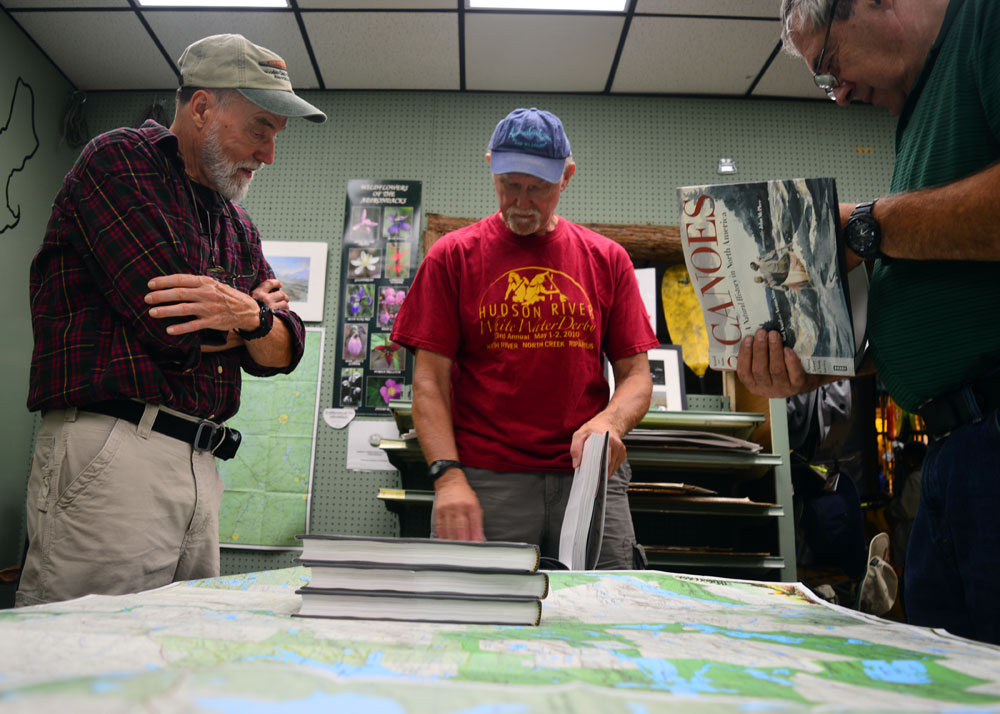 He and Neuzil approached the book as a research project, but it is not just a list of historical information. It has a narrative structure and treats history more as a story than a list of events and dates.

To research the book, the two traveled to Adirondack Experience, the Museum on Blue Mountain Lake, as well as museums in Maine, Massachusetts, New Hampshire, Ontario, British Columbia, the Caribbean and Hawaii, which Sims said was settled by natives in dugout canoes.

Sims said he thought he knew a lot about canoes when he started, but he knew nothing about dugout canoes. That became what he called the book’s most fascinating chapter.

A dugout canoe is crafted from a single log. Hundreds of years ago, Native Americans created them without metal tools. They would fell a tree by building a fire directed at the base and waiting for it to burn the trunk straight through. Then they would use fire, stone tools and shells to hollow out the logs.

A log on its own is not seaworthy; it would just roll over. To make the boats usable, they would have to spread to wood by filling the canoe with water and putting in hot stones until it starts boiling, which opens up the wood.

But the final product could be paddled in whitewater rapids and on the ocean, unlike many other canoes at the time. Dugout canoes were made in the Adirondacks as well as other places.

Sims said the book also has information and stories left out of many of the museums they visited and resources they read.

He described visiting the Peabody-Essex Museum in Salem, Massachusetts, which features Native American canoes and Chinese art. He said ship captains from Boston donated many of the exhibit items years ago.

“We’re walking through the museum, and I said, ‘This is all beautiful, but they’re hiding something,'” Sims said. “How’d they get (those items)? There was not a mention of the sea otter fur trade in the whole museum, and I thought, ‘These guys are lying to us.'”

Sims explained this with a story. He said the sea otter fur trade was not straightforward, it sometimes involved extortion and kidnapping.

Alexander Mackenzie crossed Canada to reach the Pacific Ocean 12 years before Lewis and Clark made their westbound trip across the U.S. Mackenzie and three to six “voyageurs,” seasoned Canadian fur traders, traveled via dugout canoes manned by Native Americans they met out west. Though the voyageurs were well known for being exemplary paddlers, they would be kicked out of the canoes as Natives steered them through the largest violent, frothing rapids, and would be picked up at the bottom.

Mackenzie was quoted as saying the voyageurs were the best in the world but that the Native Americans were better.

Sims said a book written about the voyageurs left off that last part of the quote.

“Little bit of racism,” Sims said of the omission.

When Mackenzie reached the Pacific Ocean, he only left a simple inscription painted on a rock face, which read, “Alexander Mackenzie, from Canada, by land, July 22, 1793.”

Why did he leave after leaving such a small mark and after such a grand journey?

Another story from Sims explains that.

Russians had been traveling to the Canadian coast to get sea otter pelts to trade with China. China had no need for most things manufactured or mined in Russia or Europe, but had a demand for luxurious sea otter fur, which its royalty wore.

“To get this sea otter, they would come into these places in British Columbia and Washington state, and the Indians would come down to them to trade,” Sims said. “They wanted the sea otter fur so badly, sometimes they would capture three or four Indians and say, ‘We’ll kill these guys unless you bring us the sea otter fur.’ So this created a lot of animosity.

“Sometimes a ship would pull into harbor and the natives would say, ‘Hey buddy! Come on! We’ll show you something,’ and then they’d kill them all.”

When Mackenzie came down from the Rocky Mountains to the Pacific coast, his Native American guides noticed people approaching. Knowing that the coastal natives were not on great terms with white visitors, the guides suggested they leave quickly.

Sims is a captivating storyteller in the spoken word as well as in print. He continued telling stories to the handful of people who had come to the canoe outfitters, giving his attention to one person at a time and glowing over the pictures and stories in his book.