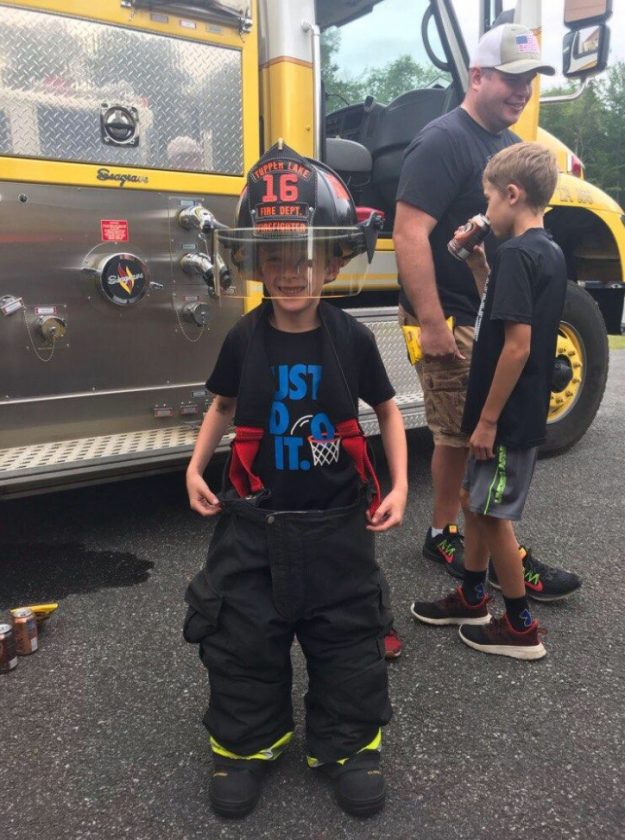 Jack Durkee tries on a firefighter helmet and pants at the Santa Clara substation. Behind him his father Tim Durkee, a state police investigator, and brother Tyler check out a fire engine. (Provided photo — Scotty Adams)

SARANAC INN — The Tupper Lake Volunteer Fire Department’s open house at its Santa Clara substation Saturday drew around 20 people to check out the departments’ equipment, meet its members and hear about what services they’ve provided since it was established in 2016.

Kids got to see tankers from the main department and the substation, and Santa Clara town Supervisor Mickey Webb cooked hot dogs.

“We told people about how we fight fires and what we try to do,” Tupper Lake village Mayor Paul Maroun said. “We showed them all the gear that we use.

“I wanted people to know that we have a contract and they pay us, but we care about Santa Clara.”

Maroun said he wants the substation to have the same technology, expertise and safety as the main department.

Santa Clara has purchased a portable pump for the department. It floats out in the water and feeds water back to shore in a line.

They have not seen a lot of action so far, averaging around 10 calls a year.

“A lot of the calls, they are false alarms at some of the big camps,” Maroun said. “(Homeowners) come out for the first time in spring and early summer, they start it up, and the smoke alarm goes off.”

He said having a station in Santa Clara saves the larger department from spending time, money and manpower driving that far for a false alarm, and could save a house by getting there sooner for a structure fire.

Maroun, who is a volunteer firefighter himself, spoke highly of the substation and the department as a whole.

“They attack a fire like you’d attack a mathematical problem; the guys are really good at it,” Maroun said. “Royce is an excellent chief.”

He said the department is requesting donations so it can purchase a new “Jaws of Life” set to extricate people from vehicles’ mangled wreckage.