The Walter Breeman Performing Arts Center at North Country School is dedicated after Walter Breeman, a graduate of the school who enjoyed set design and music. (Enterprise photo — Kevin Shea)

The old gymnasium, which fits a non-regulation-sized basketball court, also doubles as the theater room. It was once a hangar in World War II. (Enterprise photo — Kevin Shea)

The Walter Breeman Performing Arts Center is set to be finished in October. Its theater can seat 225 people. (Enterprise photo — Kevin Shea) 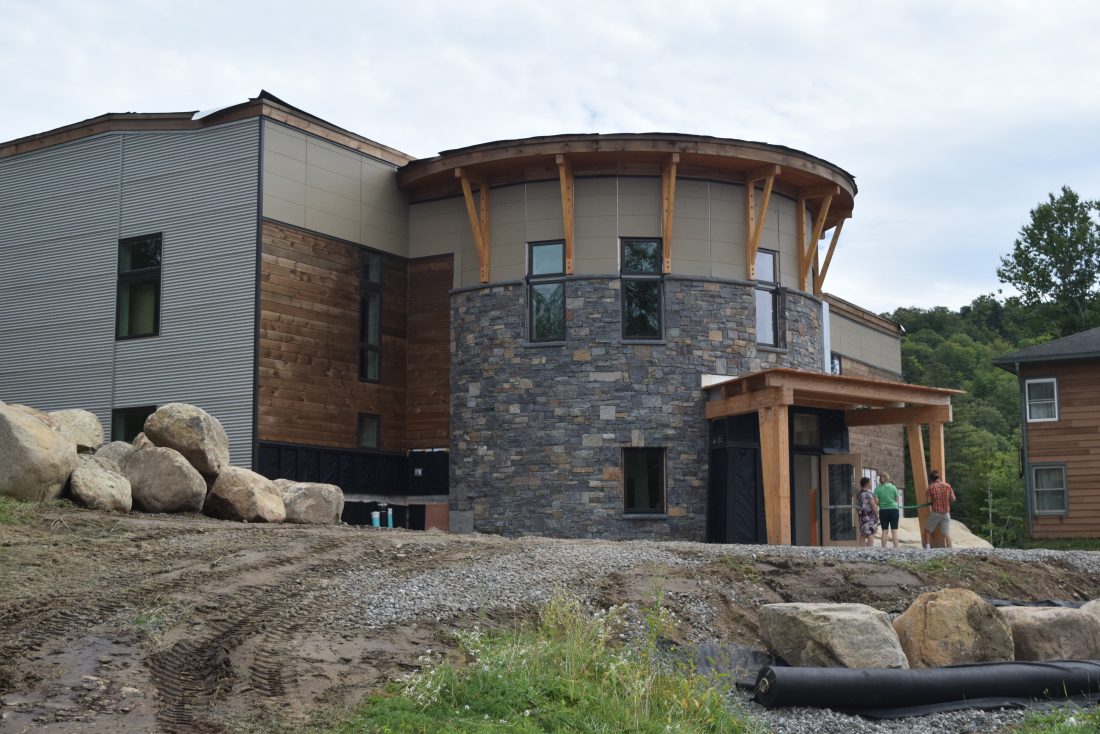 The Walter Breeman Performing Arts Center at North Country School is dedicated after Walter Breeman, a graduate of the school who enjoyed set design and music. (Enterprise photo — Kevin Shea)

The building is dedicated to Breeman, a 2010 graduate of the school who died in 2014 at age 19. After his death, his parents Barry and Pam Breeman gave back to the school with a leadership gift, but they wanted to do more. They wanted to help get a performing arts center built and named after him.

“His parents understood how he grew exponentially here,” said Matt Donahue, the school’s director of advancement, “especially with his work in the performing arts.”

Walter had performed in plays such as “James and the Giant Peach,” but he loved to work with his hands on set design and playing guitar.

Donahue and Emilie Allen, director of communications, said Walter was kind, hard-working, smart and well liked around the school. 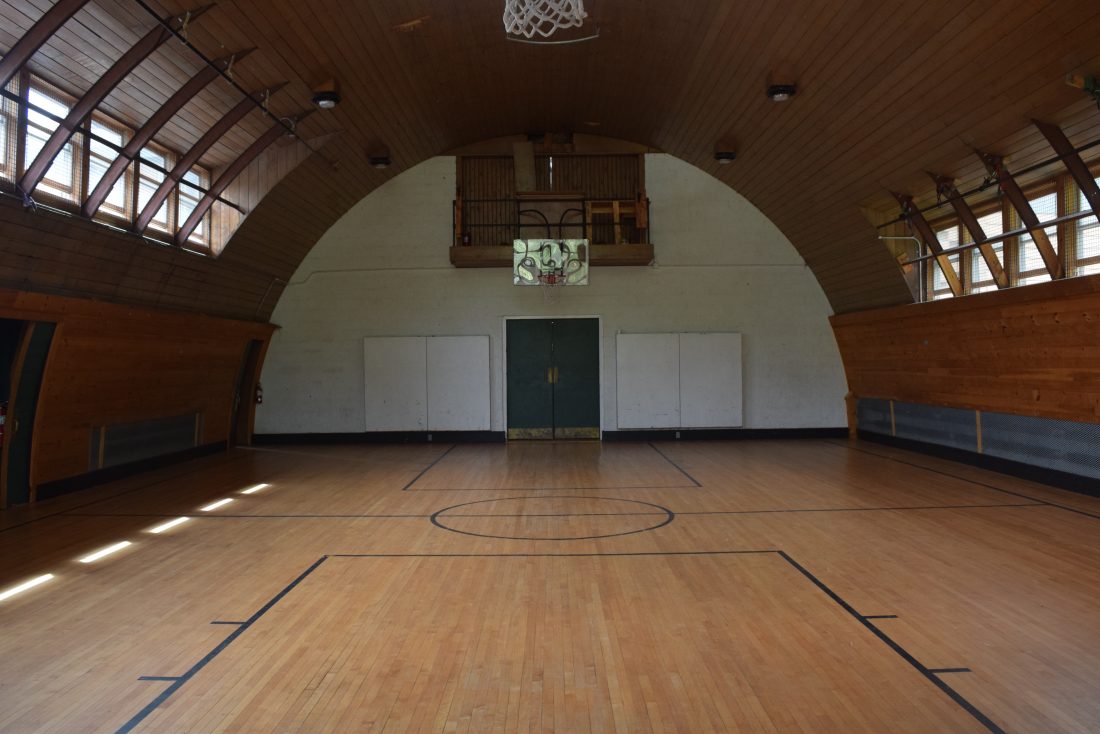 The old gymnasium, which fits a non-regulation-sized basketball court, also doubles as the theater room. It was once a hangar in World War II. (Enterprise photo — Kevin Shea)

His father is a trustee on the board and helped get the project running. The family has also set up an endowed fund for theater productions at the school.

The new arts center will be used by students this fall. Currently, school performances are held in a building that once held military jeeps and functioned as a World War II air hanger. The school bought it after the war, which was commonplace, according to Donahue, as the Army had a surplus and was getting rid of many such buildings. The school received it piece by piece and built it onto its other buildings.

Donahue said this old facility represented the scrappiness of the school, always willing to use imagination and wonder to get something done. It could also fit a non-regulation basketball court, and Allen said the kids could really transform the space for plays — but it was limiting.

In other areas of the school, students built set pieces, technological projects and art such as a metal sea dragon that can be found on Woodruff Street in Saranac Lake, but some of these areas are also limiting and uninviting. One of the labs is a room known as Flushing Fields. It’s near the septic system — hence the name — and it gets cold in the winter. It’s not ideal, according to Allen. 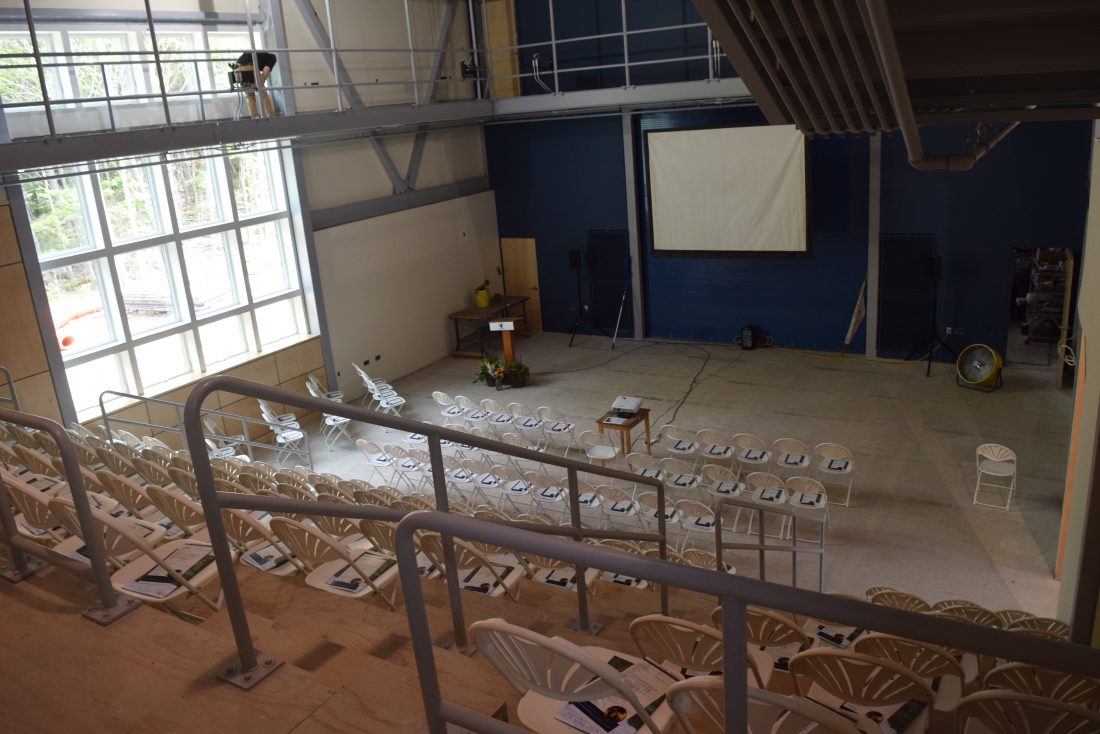 The Walter Breeman Performing Arts Center is set to be finished in October. Its theater can seat 225 people. (Enterprise photo — Kevin Shea)

The new, 10,000-square-foot building will be warm and spacious. The outside has a cabin-like exterior and rounded frame that is tradition on campus, but the inside will be new.

It will be a net-zero-ready building, meaning it will, in a sense, power itself. It will be what architects call super-insulated, meaning it will feature innovative construction and design that will make it difficult to lose heat. There will also be heat pumps, recovery ventilation systems and solar panels on the roof.

There will also be music rooms, technical design labs, spaces for theater rehearsal, costume storage and a vast theater that can be used for plays, lectures and classes. The auditorium, with its seating capability of 225, larger stage and second-floor catwalk (which will be used for setting lights, added effects and dynamics in performances), will be a step up from the basketball gym that once housed military jeeps.

The space will also be less structured than that of a typical school. The entrance will feature the fifth slide on campus; it will be next to a stairwell in the lobby that leads to the second floor.

The building is not yet complete. Students will have to wait until October to enter the building, according to Donahue.

The project is estimated to cost $6.5 million, according to Donahue. There is $1.5 million left to go. Money for the theater, music rooms, design class, and practice rooms are still needed, according to the North Country School website.

There have been 400 donors for the project so far. On the second floor, in the hallway with the piano and music rooms, will be a section where each donor is recognized. But as for dedicating the portions of the building, the school decided to choose those who have made a big impact on the students. Walter, of course, was chosen for the building.

The slide will be named after Owen Sweeney, who was well known in the performing arts department and starred as Charlie Bucket in “Charlie and the Chocolate Factory.” He died in fall 2018 at age 16 of suicide, according to his published obituary.

The auditorium will be dedicated to Don Rand, who taught at the school for several years starting in 1958. He still teaches three times a week and is a big inspiration to the school, according to Allen. In every performance there is something dedicated to him. In “Wicked,” a replica of his head was used as the Wizard of Oz.