Wages that are low for US but high for Mexico draw workers legally, on H-2A seasonal visas, to fill farm’s labor gap

A worker on Childstock Farms who is from Mexico on a H-2A agricultural work visa, runs out into a cilantro field in Gabriels after a lunch break. (Enterprise photo — Aaron Cerbone)

On Wednesday H-2A agricultural visa workers were harvesting cilantro on Childstock Farms’ fields in Gabriels. They spend five months in the North Country each year and send the money they make back to their families in Mexico. (Enterprise photo — Aaron Cerbone)

A worker for Childstock Farms in Gabriels clips cilantro. Workers from Mexico on H-2A agricultural work visas said they can earn as much in an hour as they would in a day of work back home. (Enterprise photo — Aaron Cerbone) 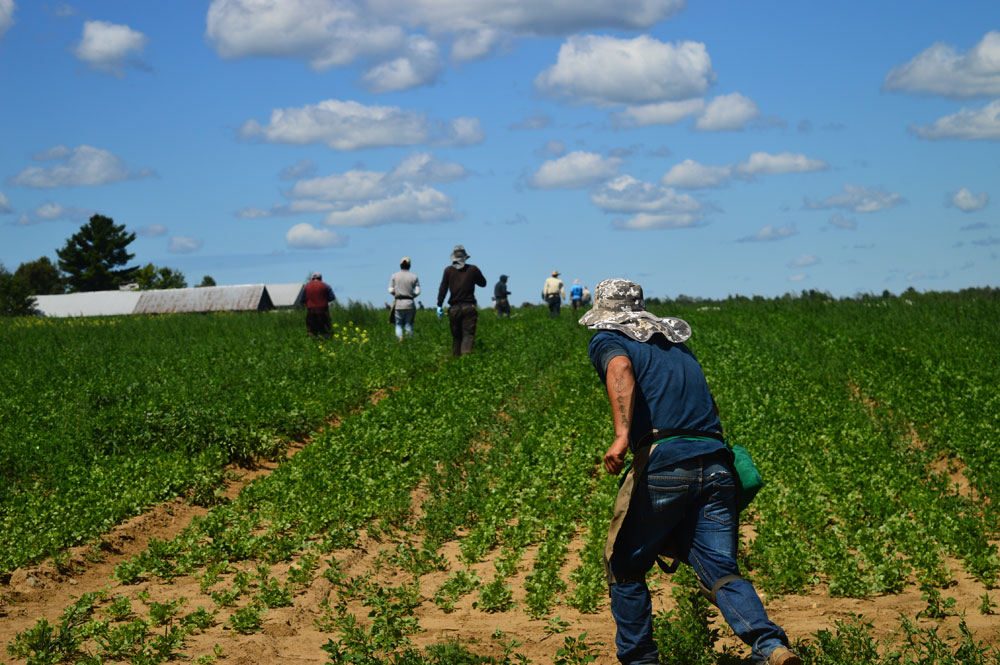 A worker on Childstock Farms who is from Mexico on a H-2A agricultural work visa, runs out into a cilantro field in Gabriels after a lunch break. (Enterprise photo — Aaron Cerbone)

GABRIELS — At a time when labor, especially manual labor, is hard to come by for North Country employers, some are able to fill their needs with people from other countries on labor visas. For farms, that is the H-2A agricultural visa.

At the Childstock Farm fields in Gabriels, H-2A workers from Mexico are in the middle of the cilantro harvest. The Malone-based farm has four fields in Gabriels and 20 in Malone. Its primary crop is potatoes, but since that is a late-season harvest vegetable, it also produces faster-growing crops such as mustard seed, turnip greens, collard greens and cilantro.

The field was hot with the dull smell of cilantro on Wednesday as around 30 workers finished their lunch break in the shade and headed back out into the field, chatting, sharpening their knives and setting to work on their row.

Neva Benware, the food safety coordinator, said they are all on H-2A visas, which are offered through the U.S. Department of Labor. They work in the North Country for five months out of the year, sending money back to their families in Mexico, whom they will rejoin in November.

Some on the crew come from the same family. They were all recruited by a Mexican native who seeks out people he thinks would be good for the job in his home community, spreading the job opportunity to capable friends, family and neighbors. 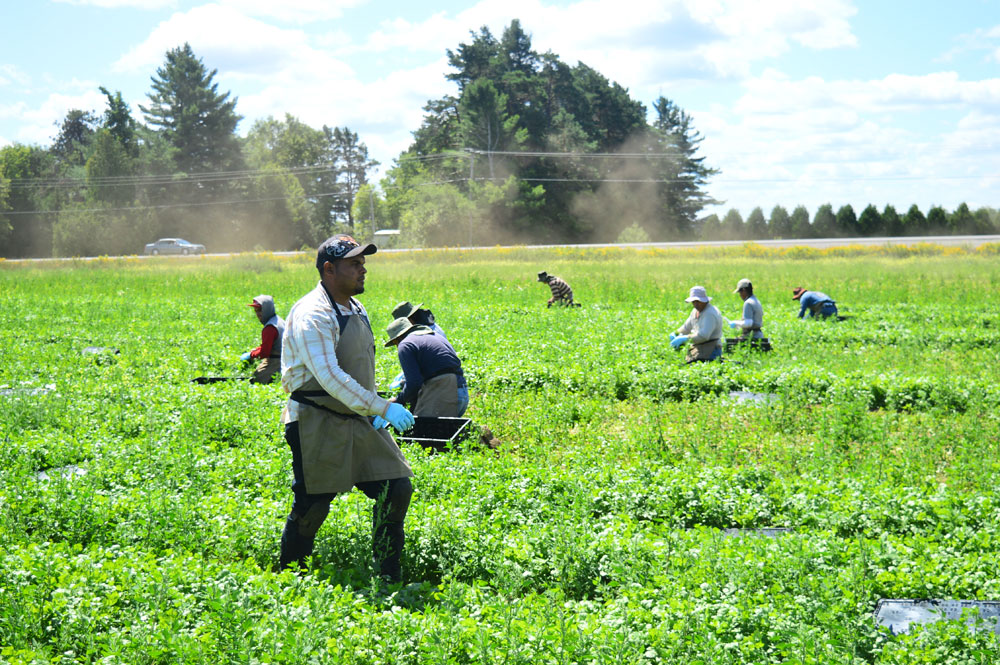 On Wednesday H-2A agricultural visa workers were harvesting cilantro on Childstock Farms’ fields in Gabriels. They spend five months in the North Country each year and send the money they make back to their families in Mexico. (Enterprise photo — Aaron Cerbone)

If the recruited men — women are rare in this particular crew — are on the farm’s list of desired returnees and want to work again next season, they will be recruited again.

Many of these guys have been returning to Childstock Farms for years. Farm owner Ralph Child of Malone said he likes when people come back year after year

Carlos Montano, who became a foreman this year, said he has been coming to the North Country for 13 years now. When asked why he returns here each year, he gestured to the green mountain ranges encircling the farm land under a blue sky

Montano said what he would make in one day at his home in Guanajuato, he can make in one hour here. 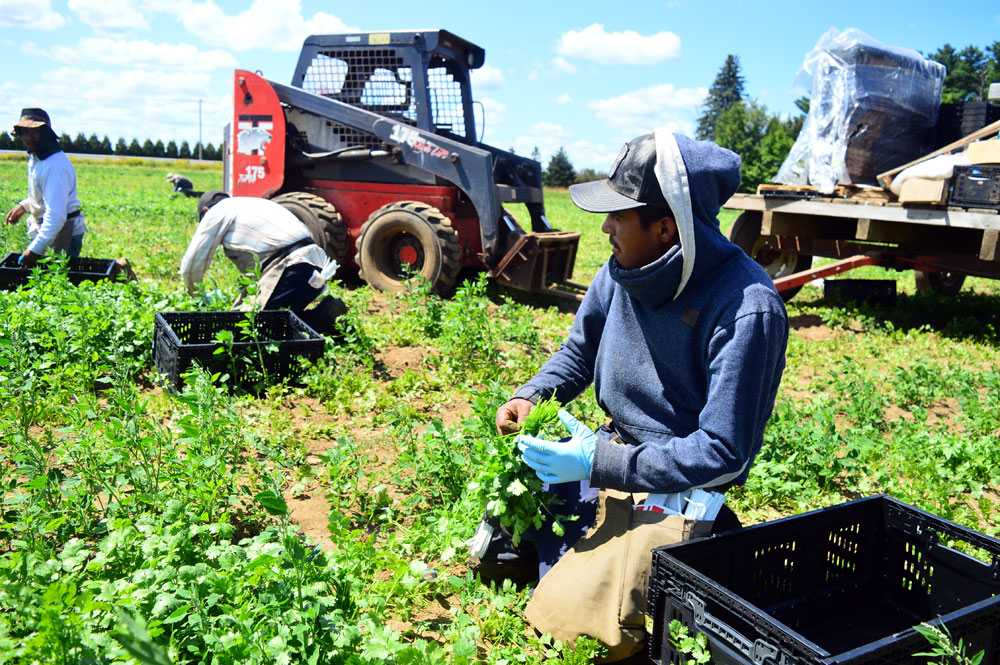 A worker for Childstock Farms in Gabriels clips cilantro. Workers from Mexico on H-2A agricultural work visas said they can earn as much in an hour as they would in a day of work back home. (Enterprise photo — Aaron Cerbone)

Their pay is regulated by the U.S. Department of Labor, which has its own minimum wage, called an adverse effect wage rate. That rate for New York is currently set at $13.25 per hour, up from $12.83 last year, according to DOL data. The current New York minimum wage is set at $11.10 per hour.

Though the pay is good for Montano, he said it is hard to be far from his family, 2,600 miles from home.

The H-2A visa program requires that the employer provide housing, so all the men live in a park of seven trailers in Child’s backyard in Malone. They have a break room where they play cards and a soccer field where they kick the ball around.

Child said he used to house workers’ families in the camp, but since the number of workers he is allowed to hire is limited by the housing he is able to provide, if he is not filling the trailers with people who can work on the farm, he is losing out on labor.

The men have their checks cashed by the farm, so they are paying taxes on their earnings. It is difficult for visa holders to open bank accounts. They send most of that money home to their families each week, Benware said.

Still, they are wearing scarves and wide-brimmed hats to block the sun and sweating as they bend over the cilantro plants.

Benware said the wages they earn in a couple of months in Malone can help some of their families move into the middle class.

“They’re very happy to be here, and we’re happy to have them,” Benware said.

Child said he took up the farm in 1982, selling off its cattle, starting to grow greens and continuing its seed potato production. As the farm grew over the years, he had to hire more workers and turned to visa labor, using labor contractors to recruit people from other countries.

“(Ralph) has tried to hire local people,” Benware said. “Honestly, I think it would be really difficult to establish an American workforce of this size that would stay without a high turnover rate. It is really hard work. … Let’s be honest, not a lot of people would want to do that.”

This is a national trend as well. Recent DOL statistics indicate that for over a year the number of open jobs in this country has exceeded the number of people looking for work.

Child said he has around 50 employees, 43 of whom are on H-2A visas. The others are locals.

“The H-2A is beneficial from the standpoint that I have legal workers that can come back every year,” Child said. “For the privilege of having legal workers I have to work under a set of regulations that other employers aren’t subject to.”

For example, while most employers can terminate an employee for low productivity, it is a bit harder for him.

He also takes on a lot of overhead expenses before anyone even starts working, paying for everyone’s visas and travel himself.

The H-2A visa process involves a background check, and three interviews at a U.S. consulate, where the government vets each applicant. Benware said the H-2A immigration standards are high. Child said he hires an immigration attorney to work through that process.

He then charters buses and vans so the men can take the three-day trip up to the North Country. While they live on his property, he said everything is paid for but their food and drink.

“We treat people fairly,” Child said. “I treat them all with respect.”

Child said he has hired people with green cards in the past, as there are fewer regulations and cost in hiring them. Usually, he said these were single young guys who were looking to travel around and were not working to provide for a family back home.

Green cards are harder for employers to verify, and he said forgeries are not uncommon. He said he sometimes would hire someone with a green card, only to have them apprehended by U.S. Customs and Border Protection two weeks later.

“Any workers that are out in the fields, in the public space, they’re fair game as far as questioning and apprehending,” Child said.

He said the northern border is a “hot zone” for immigration enforcement because the St. Regis Mohawk Reservation sits on both sides of the U.S.-Canadian border.

“H-2A is the only program that works for me, but that doesn’t mean I like how it’s administered. I think it needs some reforms,” Child said. “It needs a lot of reworking. But, I mean, immigration (reforms) are a tough sell no matter what.”

One problem with the H-2A visa, Child said, is that it is only for seasonal labor, which makes it hard for year-round employers such as dairy farmers.

“There’s still workers out there living in the shadows because H-2A’s not available for what they’re doing,” Child said.

He said he would rather the visa be administered by the U.S. Department of Agriculture than the DOL.

“Working with USDA, it would be more of a farmer-friendly agency that understands our needs better,” Child said. “The U.S. government says they want legal immigration, not illegal. OK, so give us a program that works. But they seem to be more about enforcement than alternatives.”

At the farm in Malone, four more H-2A visa workers ran the cilantro through a vat of cold water to cool it down after it was out in the sun for weeks. The packaged cilantro was then loaded onto 18-wheeler trucks heading to a farm Childstock Farms contracts with in South Carolina, where it will be distributed to other vendors, including Walmart.

The H-2A visa workers will be at Childstock Farms until the potato season ends in November.