The Armstrong family speaks at a public hearing Monday on the latest version of proposed short-term rental regulations for the village of Lake Placid and town of North Elba. (Enterprise photo — Elizabeth Izzo) 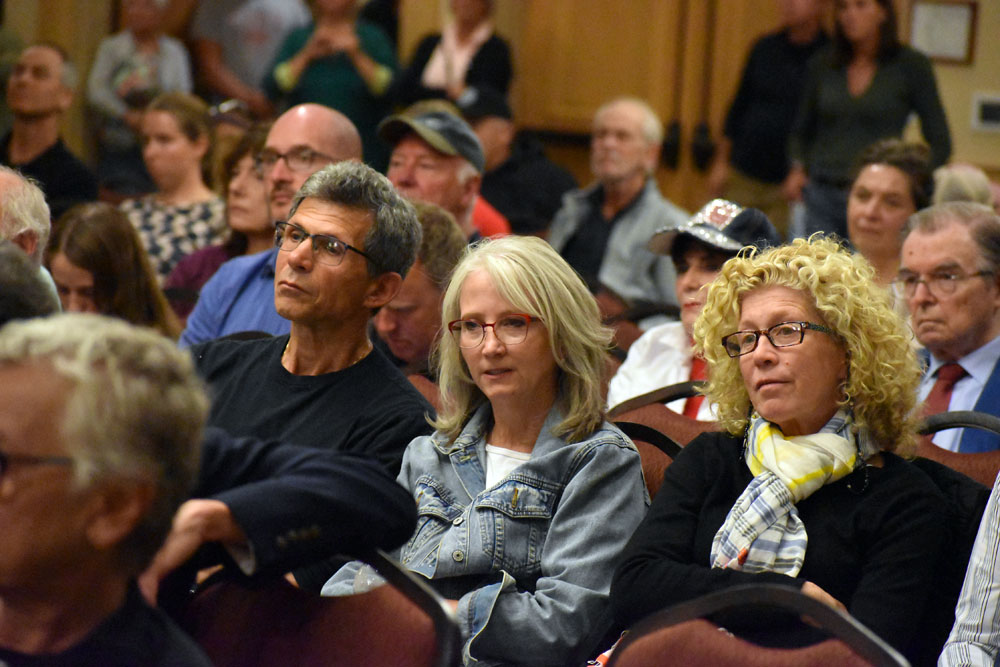 LAKE PLACID — Roughly 200 people turned out for a public hearing on a proposed law to regulate short-term vacation rentals.

The hearing quickly grew passionate, with speakers focusing not so much on nuances of the law but more on the identity of Lake Placid, financial hardships that are pushing residents to either leave or rent their homes to tourists, and the impact many residents feel short-term rentals are having on the community they’ve lived in for decades.

Altogether, 48 people spoke. Nearly half spoke in favor of tabling the regulations or paring them down, while the other half pushed for the regulations to be adopted either as proposed or rewritten to be more restrictive.

Concerns over the number of short-term rentals in the village of Lake Placid, particularly the increasing number in traditionally residential areas, have continued to mount for more than a decade. Those concerns came to a head in the last few years, the public pressuring lawmakers to mitigate the impact of vacation rentals on the quality of life in residential neighborhoods, while also trying to protect the busy local tourism economy. 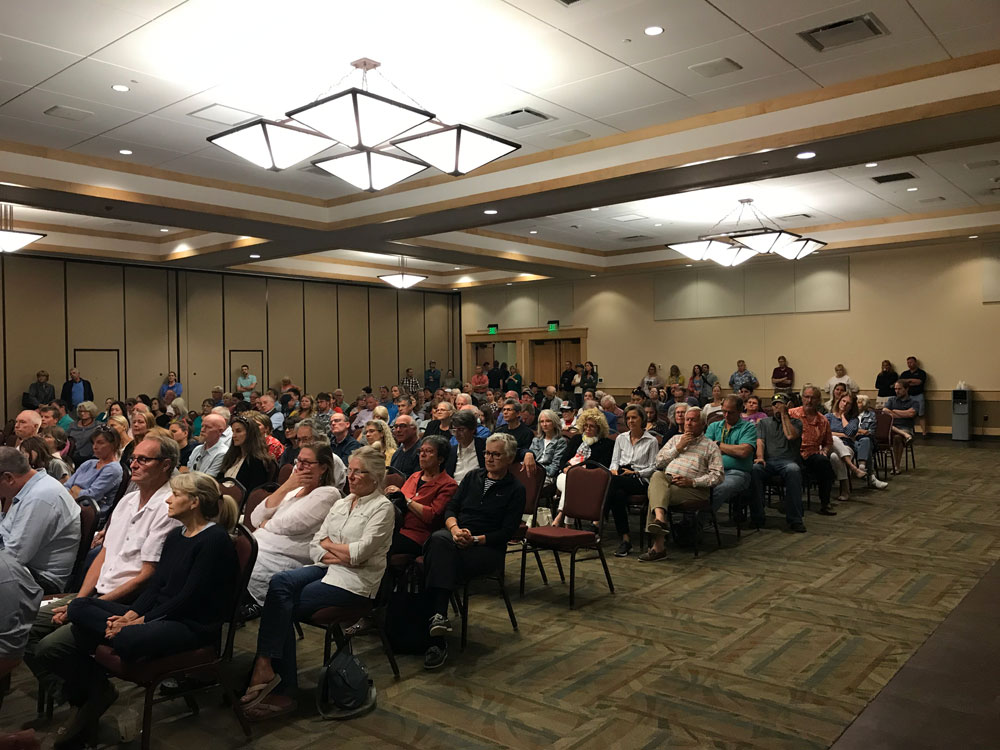 There are currently at least 706 active short-term rental properties listing Lake Placid addresses, according to AirDNA, a platform that aggregates online vacation rental data from Airbnb and HomeAway. Those include private rooms, shared rooms and entire homes. They do not include those in neighboring communities such as Wilmington, Keene, Ray Brook and Saranac Lake.

The proposed short-term rental law would require those who rent out their properties on sites such as Airbnb, VRBO and HomeAway to apply for and secure a permit, limit the number of visitors who stay there and ensure there’s adequate off-street parking to serve those visitors. If property owners don’t, they’d be subject to a fine of $350 to $1,000 or up to 15 days in jail. 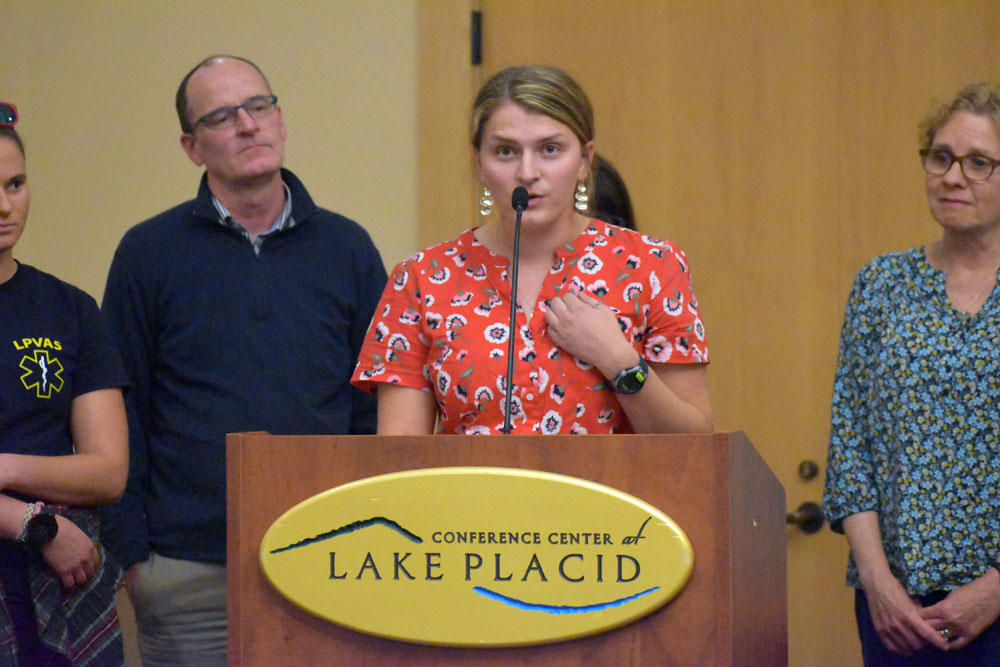 The Armstrong family speaks at a public hearing Monday on the latest version of proposed short-term rental regulations for the village of Lake Placid and town of North Elba. (Enterprise photo — Elizabeth Izzo)

Among a contingent of full-time, long-term Lake Placid residents, there’s some resentment for short-term rental owners that seems to stem from what they see as a diminishing sense of community. There’s a feeling that people who grew up here, people who work here and people who identify themselves as “working class” are being pushed out of the village as property values skyrocket in tandem with the rise of the online vacation rental industry.

In the past, some full- and part-time residents have expressed concerns about noise pollution in their neighborhoods as a result of the short-term rental properties; vaulting property values that result in higher taxes and fewer families being able to purchase a home here; the impact vacation rentals may be having on the long-term rental market; the overcrowding of small, narrow side streets as rentals sometimes draw a greater number of guests to a household than would normally live there; as well as the potential impact on the village police department, which typically receives an increase in noise complaints during large tourist events like the Ironman triathlon and Summit lacrosse tournaments.

All of those concerns and more resurfaced at the hearing Monday evening.

Zay Curtis, a Lake Placid resident and former village board member, said he now has the Lake Placid Police Department on speed dial.

Since the lacrosse tournament came into town, he’s called the police five times to complain about noise at a neighboring Airbnb. He said he’s been awoken at 2:30 a.m. multiple times, and even though the police quell the disturbance each time, a few days later a new visitor comes.

“At what point do I get to stop calling the police department in the middle of the night and that short-term rental is permanently handled?” He asked. “At what point are there enough complaints for the government to take action?”

Anthony Pascarelli, a Wilmington resident who’s employed as a caretaker for a vacation rental in Lake Placid, said he’s been called about noise complaints multiple times. One of the more memorable was when he arrived in response to a complaint to find that all of the furniture had been pushed to the side and strippers were dancing in the middle of the room, bathed in dim green and purple lights.

He said 20 cars were parked outside the property, and he didn’t know what would await him if he tried to break up the party by himself. He also didn’t want to see the renters try to drive throughout the village while drunk, looking for other accommodations.

Karen Huttlinger lives on Marcy Road in Lake Placid. From her home, she can see nine other houses on her street.

Only three of them have full-time residents living there, she said.

Dave Jones has lived on Greenwood Street since 1951. He says it’s the “coolest neighborhood in Lake Placid,” but with the proliferation of vacation rentals, it’s not the same anymore. There aren’t as many children playing in the street, the sound of their laughter nearly gone from the neighborhood.

That’s a feeling shared by Don Scammell, who has lived on Bear Cub Lane for 40 years.

“We used to know everybody,” he said. “Now we know nobody.”

Multiple residents contended that short-term vacation rentals should be treated as commercial businesses under the land-use code and thus be banned from residential zones. In the meantime, others are calling for lawmakers to move forward with the proposed law.

“Please. This is a start,” Jones told the town and village boards. “Please pass this law.”

Rental owners said the housing crunch can’t be wholly attributed to their businesses.

Donna Morris-Calvey, owner of the High Peaks House and an Elm Street resident, said she understands there’s a shortage of affordable housing in Lake Placid.

“I’m concerned by the desperate effort of some members of the community to blame short-term rentals for their problems,” she said.

“I urge the town and village boards to stay the course and table this proposal.”

Her husband, Doug Calvey, posed a scenario where families who come to visit Lake Placid can’t find a place to stay together and choose not to come.

Multiple speakers — many of whom were members of the Gold Medal Hospitality group, a coalition of short-term rental owners — contended that short-term rentals provide homeowners with the opportunity for an additional income stream.

Laurel Michaels, a part-time Whiteface Inn Lane resident, said she only rents her home here to cover her expenses and keep the property in her family.

“These regulations are so extreme,” she said, “they threaten to cripple short-term rentals.”

Multiple speakers also said rentals contribute significantly to the local economy, both by paying the county’s 3% occupancy tax on each stay and by hosting tourists who spend money at local businesses, generating sales tax revenue.

“This town is not what it was 20 years ago,” said Brian Quinn, who lives part-time in Philidelphia and Lake Placid. “The Olympics are never coming back.”

“If short-term rental owners think they’re the cause of our tourism,” Scammell replied, “They just don’t read the newspaper.”

Some speakers contended that parts of the law were illegal and not in line with state laws.

Lake Placid Mayor Craig Randall said the town and village boards will meet with their legal counsels and discuss potential modifications to the law.

“The idea of the (town and village) boards doing nothing is something the community will not accept,” Randall said.

“I doubt we’re going to see an end to short-term rentals. But we do have to gain some control.”