John Culpepper, director of facilities and sustainability at North Country School and Camp Treetops outside Lake Placid, operates a large-scale drum composter there in spring 2017. (Photo provided by the Adirondack North Country Association)

A compost system, designed through a state grant for the North Country School, arrives at the Wild Center Monday and will start composting food waste in September. (Provided photo — the Wild Center) 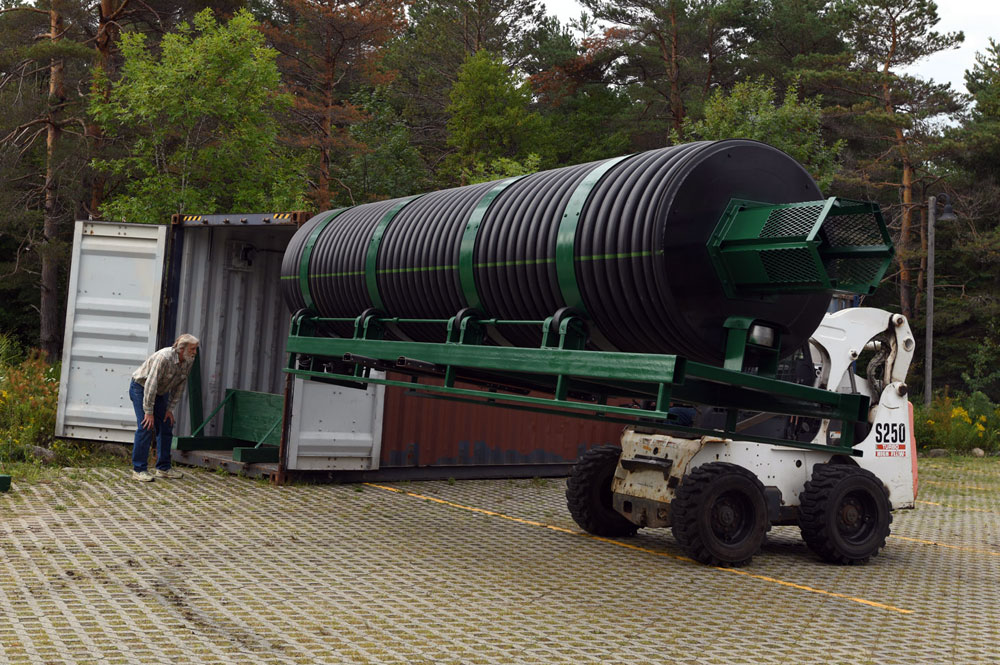 A compost system, designed through a state grant for the North Country School, arrives at the Wild Center Monday and will start composting food waste in September. (Provided photo — the Wild Center)

TUPPER LAKE — Three new industrial composting systems have been installed at or in cooperation with local schools in Tupper Lake, Lake Placid and De Kalb Junction this week. It’s the latest in a series of state-funded compost projects that started at North Country School and Camp Treetops three years ago.

This process reduces the amount of methane gas produced by the school’s food waste, allows the schools to use the resulting compost material in gardens and fields, and saves the schools money on tipping fees at landfills.

The grant money for these installations comes from the New York State Energy Research and Development Authority’s Cleaner Greener Communities program, a four-year $100 million green initiative, through the Adirondack North Country Association. NYSERDA partnered with Director of Facilities and Sustainability John Culpepper from North Country School in 2017, who worked with contractor Greg LaClair in Upper Jay to design and produce a cheaper, more effective and contained composter.

“NYSERDA was so happy with the outcome of that one project that they allowed us to fund three additional composters,” said Jennifer Perry, the sustainability project coordinator at ANCA. 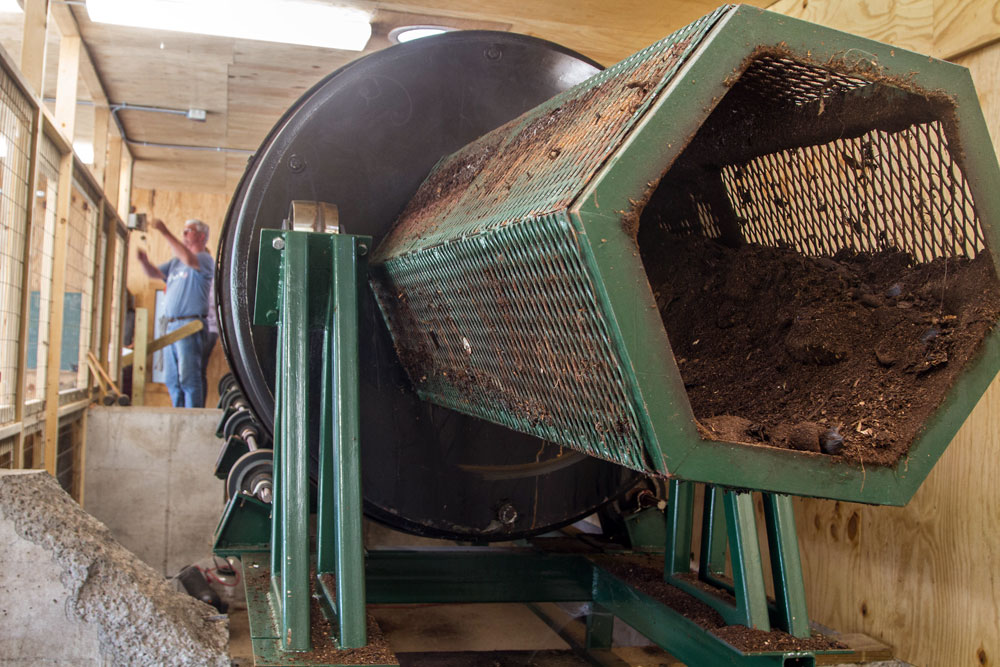 John Culpepper, director of facilities and sustainability at North Country School and Camp Treetops outside Lake Placid, operates a large-scale drum composter there in spring 2017. (Photo provided by the Adirondack North Country Association)

Around 50,000 pounds of food waste go into that composter a year; middle school students feed the waste gathered on campus into the tube. The material loses over 50% of its weight in the process and comes out as a type of soil fertilizer.

“We’re simply providing really good conditions for the bacteria that do all of the work,” Culpepper said. “We see ourselves as stewards of these little microbes.”

The microbes, though small, are massive in number. Culpepper noted that the U.S. Department of Agriculture estimates 15 quintrillion (a 15 followed by 18 zeros) microbes in a compost drum the size of theirs — the same number of estimated grains of sand on all of Earth’s beaches, according to research from the University of Hawaii.

These 15 quintrillion microbes in North Country School’s compost became operational in May 2017.

Culpepper and Perry selected three more host organizations to receive tubes each filled with some 15 quintrillion microbes of their own. They said they based their choices on the organizations’ proven commitment to sustainability initiatives and their ability to successfully complete projects.

“Lake Placid, Hermon De Kalb and the Wild Center stood out immediately as ideal recipients for the systems,” said Perry.

The last composter was installed Monday at the Wild Center. When the school year starts in September, it will start taking food waste from both Tupper Lake schools and the museum and will be integrated in the museum’s “New Path Tour,” which highlights its sustainability initiatives.

Tupper Lake students have spent several years preparing for the school to get a compost system.

“This is something that our Green Team has been working towards, literally since I can remember,” said Emily Burns, who graduated in June. “It’s been a long process. … Even though I’m not going to be there next year, it leaves me feeling like the seniors — me, Sophia (Martin) and Charlotte (Price) — made a difference.”

Jen Kretser, director of climate initiatives at the Wild Center, said the Green Team worked well with the museum.

“They’re just an amazing group of young people that really want to make a difference in their school and their community,” Kretser said.

Hermon De Kalb Central School will include the composter in its local food program. Perry said the school’s composting system will be supported by several committed community members, including an Amish farm, a local restaurant and SUNY Canton.

Now, with the help of science teacher Tammy Morgan, they are creating a student-run business model for collecting organic material from community members, operating their own composter and distributing the end product.

The food waste is mixed with wood pellets to assist decomposition and can handle up to 300 pounds of waste a day.

A system this size can cost between $40,000 and $150,000 on the open market. Culpepper said the materials cost for his composter design is approximately $15,000 and that a competent machine shop can easily produce the frame for little cost. These systems are contained in retrofitted 40-foot shipping containers.

“Composting is not new to us,” Culpepper said. “The beauty of this design is that it speeds up the process considerably, but also lowers the physical footprint.”

He said what used to take nine to 12 months to compost only takes two now.

In two years, the school/camp has processed over 116,000 pounds of organic material, composed mostly of food scraps, into 53 cubic yards of high-quality compost that is then used in the school’s vegetable gardens.

These systems run at high heat, around 130 degrees Fahrenheit — hot enough to compost meat and dairy, which most home composters cannot.

Culpepper estimates the system pays for itself in five to eight years due to cost savings from tipping fees and the value of finished compost. Each composter offsets about 9 metric tons of greenhouse gas emissions annually — the equivalent of removing two vehicles from the road.

Waste that is buried in a landfill does not receive oxygen, which means it produces lots of methane gas.

“T(his) is an excellent example of the impact local communities can have by coming together in an effort to advance sustainability and environmental stewardship,” said Alicia Barton, president and CEO of NYSERDA. “Public-private partnerships are a cornerstone of Gov. (Andrew) Cuomo’s efforts to eliminate New York’s carbon footprint, and the leadership and innovation shown with this North Country project has already inspired others to join the state’s efforts to reduce emissions and protect our natural resources for future generations.”

Inspired by a growing interest among institutions, contractor LeClair started a small business in Upper Jay that manufactures the composting machines.

“Working with North Country School has been a fantastic experience. John told me what they needed the machine to do, and my team and I designed a system to meet those needs,” LeClair said. “I love this project. If I could build these full time, I would.”

Organizations can build composters of their own if they want. LeClair and Culpepper’s system design is on the North Country School’s website at https://www.northcountryschool.org/farm-garden/sustainability/composting.

Culpepper said he receives requests for information on a daily basis.

“We envision spreading this technology around the world,” Culpepper said, “one composter at a time.”