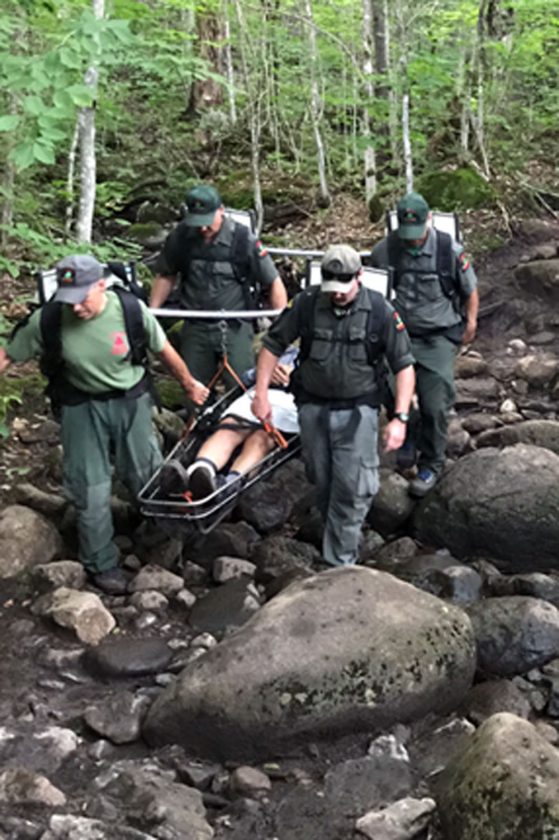 State Department of Environmental Conservation forest rangers rescued a number of injured and lost people around the Adirondacks last week.

Just before 4 p.m. on Monday, Aug. 19, DEC’s Ray Brook dispatch received a radio transmission from Assistant Forest Ranger Jonathan Leff stating he had received a report of a 70-year-old male hiker who had suffered an ankle injury on a trail in the MacIntyre Range.

At 4:23 p.m., Ranger Leff located the injured man from New Rochelle at the Whale’s Tail Junction. Meanwhile, Forest Rangers James Giglinto, Daniel Fox, Kevin Burns, and Scott Sabo started up the trail to assist. The rangers carried the man by litter down to a six-wheeler, which was used to drive the subject out to the trailhead.

Once back at the trailhead, the injured hiker opted to seek medical treatment on his own, and all forest rangers were cleared of the scene by 7 p.m.

Forest Rangers David Kallen and Andrew Lewis responded to assist and were on scene by 12:30 p.m. When the hiker was located, she was with fire department personnel and her leg had been stabilized by emergency medical services. A vertical technical rope rescue was set up to haul her up to a ledge.

Once the woman was up on the ledge, she was carried to the trailhead by forest rangers and emergency personnel. The hiker was loaded into a waiting ambulance at 2:45 p.m. and transported to a local hospital for treatment. The incident concluded at 3:15 p.m.

Shortly after 6 p.m. on Wednesday, Aug. 21, DEC’s Ray Brook dispatch received a call from New York State Police requesting assistance searching for a missing 77-year-old woman from the town of Jay. The woman’s husband believed she left the house between 1 and 5 p.m.

Forest Ranger Dan Fox responded and was on scene at 7:03 p.m. After consulting with on-scene resources, four additional forest rangers were dispatched to assist with a search of the immediate area, which included trails, roads, residences, and outbuildings. Forest rangers were assisted by state troopers and their K-9 units, State Police Aviation, Clinton and Essex County sheriff’s departments, DEC’s Division of Law Enforcement, friends and family. Search operations continued into the night. Plans were made for the following day, including identifying necessary resources.

At 7 a.m. on Thursday, the woman was located in a nearby overgrown field in need of medical assistance. Forest rangers, State Police and members of local fire departments carried the woman out to a waiting ambulance to be transported to a local hospital for treatment. The incident concluded at 9 a.m.

At 1:31 p.m. on Saturday, Aug. 24, Washington County 911 transferred a call to DEC’s Ray Brook dispatch from a 39-year-old male hiker lost on Pilot Knob Mountain with his 8-year-old son and the son’s 9-year-old friend. The hikers from Ballston Spa were looking for a plane wreck on the side of the peak when they became disoriented along the maze of old roads and herd paths near Inman Pond. Coordinates placed the group just below the summit, where they were requested to remain in place until forest rangers arrived.

Forest Rangers Michael Bodnar and Nancy Ganswindt responded and located the lost hikers at 3:45 p.m. Rangers guided the group to the trailhead and were cleared of the Lake George Wild Forest at 4:50 p.m.

At 3:25 p.m. on Saturday, Aug. 24, Franklin County 911 transferred a call to DEC’s Ray Brook dispatch from a man on the Van Hoevenberg Trail on Mount Marcy reporting a member of his hiking party had a non-weight-bearing ankle injury. The man stated that on the hiking group’s way down from the summit, a 27-year-old Oswego woman twisted her ankle and could not continue.

At 4:41 p.m., Mecus was lowered down to the hiker to evaluate the injury. The woman was loaded in a harness to be picked up by the helicopter for transfer to a local hospital.