Fire towers get second life a century on 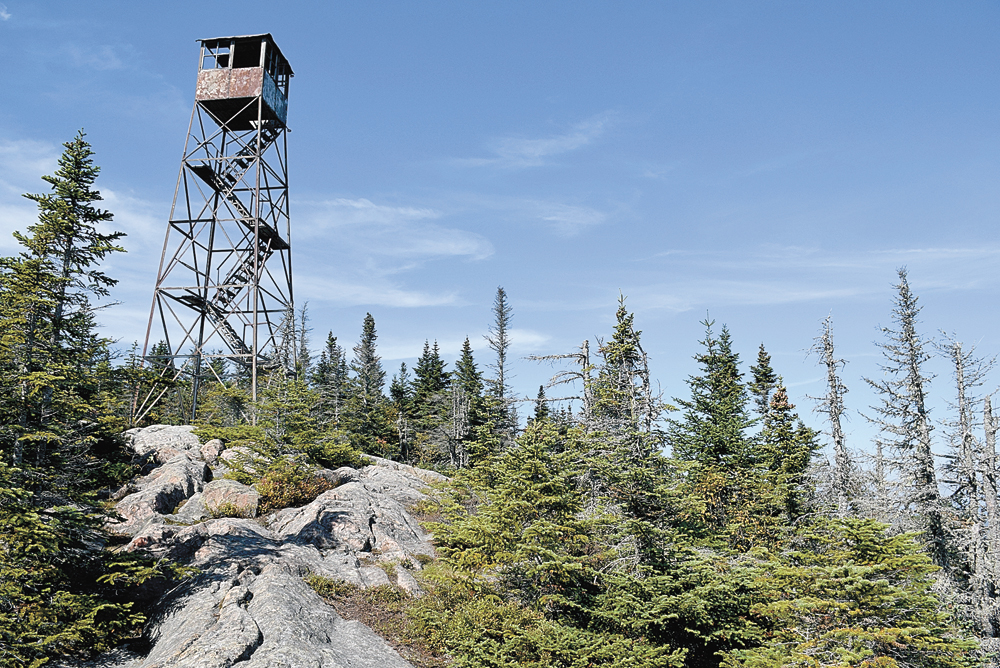 The Loon Lake Mountain fire tower is one of the few Adirondack towers that have not been restored. (Enterprise photo – Justin A. Levine)

SARANAC LAKE — For hikers and snowshoers in the Adirondacks, it’s hard to imagine a park with no fire towers. But 30 years ago, the state planned on removing most of the metal towers that adorn Adirondack peaks. They had been out of use, and many were dangerous and — literally — in danger of falling down.

But a legal workaround and groups of dedicated citizens did the impossible and managed to save most of the remaining fire towers, even as the state discontinued their use and funding.

The Adirondacks were a very different place 120 years ago, and as clear-cuts and railroad lines crisscrossed the landscape, sparks from those train engines — and other sources, such as burning to clear land — led to some astoundingly large forest fires. 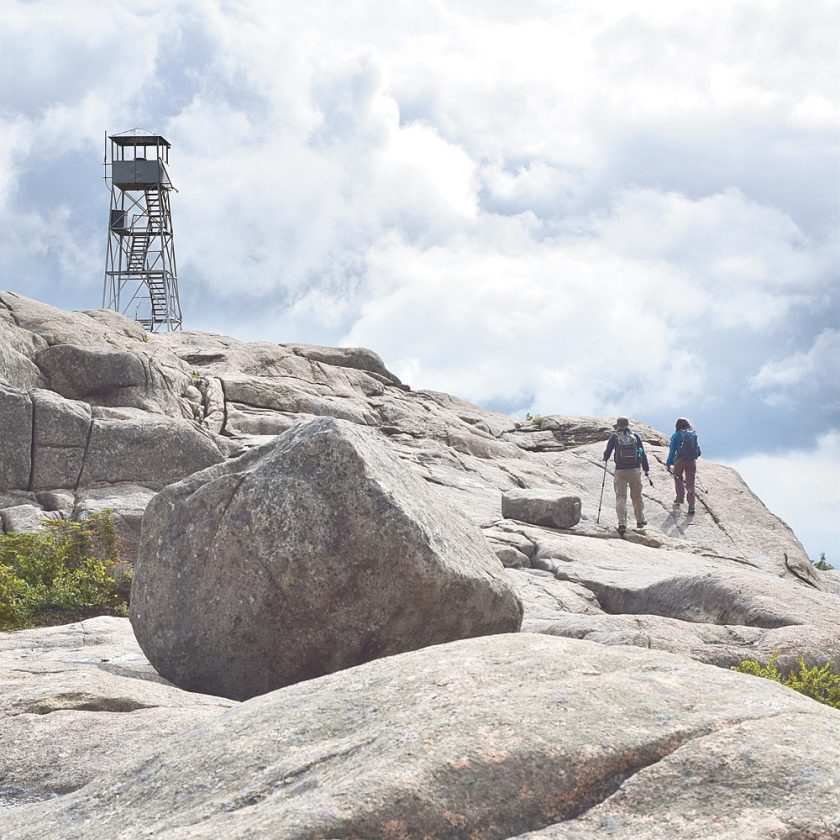 Hurricane Mountain, which has a restored fire tower, was recently named the best hike in New York by Outside Magazine. There was a centennial celebration for the tower earlier this month. (Enterprise photo – Justin A. Levine)

According to the state Department of Environmental Conservation, in 1903 more than 460,000 acres of wildlands were burned — just within the Adirondack and Catskill Forest Preserves. 1908 was another bad fire year, with another few hundred thousand acres burned, including the hamlet of Long Lake West, which included the burning of numerous train cars, a train station and a large hotel. Much of the hamlet had to be evacuated by train.

The next year, the DEC — which at that time was still a number of small departments; it wouldn’t become the Conservation Commission until 1911 — enacted changes designed to detect fires more quickly.

According to a 2017 North Country Public Radio interview with Forest Ranger Scott vanLaer, the addition and success of fire towers eventually led to fire observers working themselves out of a job.

“What they had in place then was called fire wardens, and they essentially designated people in towns and hamlets that they thought would function well to supervise putting out fires,” vanLaer said. “But they weren’t paid. They were volunteers and were only paid when they were fighting a fire.

“After 1908, it became clear — after hundreds of thousands of acres burned and the entire hamlet of Long Lake West burned — that it didn’t work. So the act of 1909 not only created what we know as the forest rangers, but it created the funds for the prevention system. This is when all those fire towers started to go up, and you saw for the next several decades this come into place. And it was highly successful. If you go through this documentation, you can see how the number of fires and acreage goes down over time. 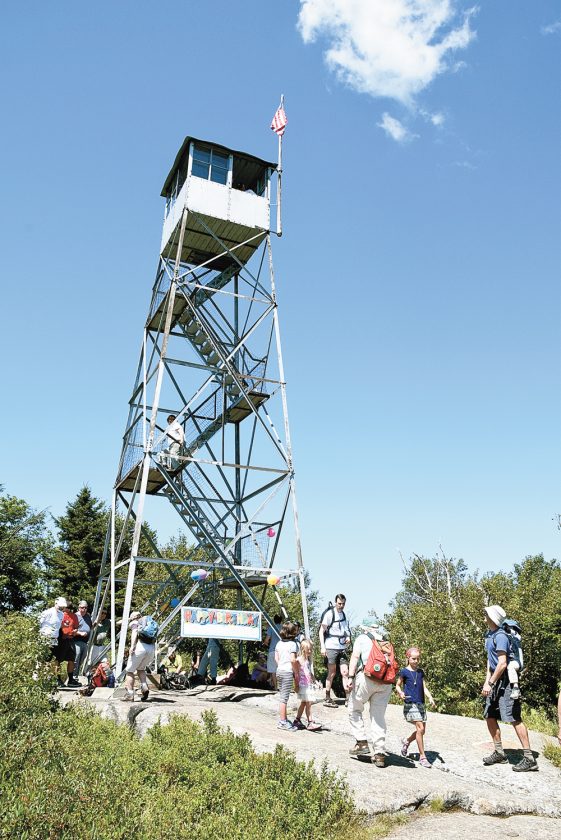 A crowd of hundreds climbed to the rehabilitated Poke-O-Moonshine fire tower for its centennial celebration in the summer of 2017. (Enterprise photo – Justin A. Levine)

“[By the 1960s] we got so good at our job, you actually saw the fire towers be abandoned and the fire tower observer’s job eventually disappearing.”

Some of the early towers were wooden platforms, open to the weather. Those quickly gave way to the metal fire towers we still see today. With the addition of paid fire spotters, complete with phones to alert rangers more quickly, the advent of large fires in the Forest Preserve dropped off quickly. The DEC says that by 2002 — more than a decade after the last tower was decommissioned — the total area burned by wildfire was just 2,062 acres. And that was across the entire state, not just within the Blue Line.

The DEC began to phase out fire spotters in earnest in the 1980s, and by 1990 all fire towers were closed. But they were still there, in the woods, and often in places where they were no longer legally allowed to be.

Some of the state Adirondack Park Agency land classifications say that any man-made structure is not allowed, and fire towers are definitely made by man. This resulted in the state planning on dismantling and removing many of the towers.

However, the DEC and APA, prodded by interested members of the public, began to reclassify small areas under the towers as historic, which allows the towers to stay. For instance, the tower atop St. Regis Mountain is within the St. Regis Canoe Area. Managed essentially as a wilderness area, the tower did not conform with the Adirondack Park State Land Master Plan. But a change in classification allowed the tower to stay, and it was recently reopened to the public after several years of restoration work.

“The St. Regis Fire Tower does not currently meet the criteria of an essential use for the Department of Environmental Conservation and its removal should therefore either occur within three years from the adoption of this Unit Management Plan or other alternatives based on recommendations identified in the proposed comprehensive study of fire towers within the Adirondack Park,” the canoe area unit management plan says.

But in 2014, a 0.5-acre parcel at the summit of the mountain was reclassified to historic, allowing the state to retain the tower without violating the APSLMP. This is the same tack that was taken with a number of other towers, including on Hurricane Mountain.

Of the 57 towers originally within the Adirondacks, 34 still remain. Twenty are on Forest Preserve lands while the other 14 are on private or municipal lands.

Laurie Rankin, who is president of the New York chapter of the international Forest Fire Lookout Association, said fire towers have been appealing since they were installed, mainly because they were staffed by people from the community, and communities took pride in their towers.

“I think the appeal of fire towers is varied, but can all be placed under the heading ‘community.’ Historically, the fire towers were placed on mountaintops to protect the surrounding communities from devastating fires,” Rankin said. “We seem far removed from them now, but in the early 1900s fires destroyed entire communities, businesses and residences and thousands of acres of working forest. The towers stopped that devastation.

“Also within communities, the fire towers were always a destination for family picnics. People walked, rode horse and wagons to them and more to enjoy family time in the shadow of these protecting structures and to visit with and learn from the observers in the fire towers. During the 1970s and 1980s, when DEC policies and funding changed, these important community icons were left abandoned. But the local communities put time, energy and monies into restoring them in the 1990s and still do today. Thus today, the third and fourth generation of a family from a local community can still help out, still have a picnic, and still enjoy the views!”

To complete the challenge, a hiker must climb all five Catskill towers along with 18 of the 25 Adirondack fire towers. Once the mountains are climbed, hikers can submit a form and earn a patch.

Almost every fire tower now has a “friends” group associated with it, many of which have websites and Facebook pages. The DEC also provides guidance on its website on how to begin the restoration process.

Several of the Adirondack towers will be visible after dark on Saturday, Aug. 31 for the sixth annual Lighting of the New York State Towers. This event started in the Catskills and has spread, and this year will be the third that the St. Regis tower will be lit up. The Hurricane and Stillwater towers have also participated in the past.

Volunteers will climb the mountain and light up the interior of the tower cab from 9 to 9:30 p.m. that night, making it visible after dark.