Saranac Lake art scene thriving, and finding an audience for the work 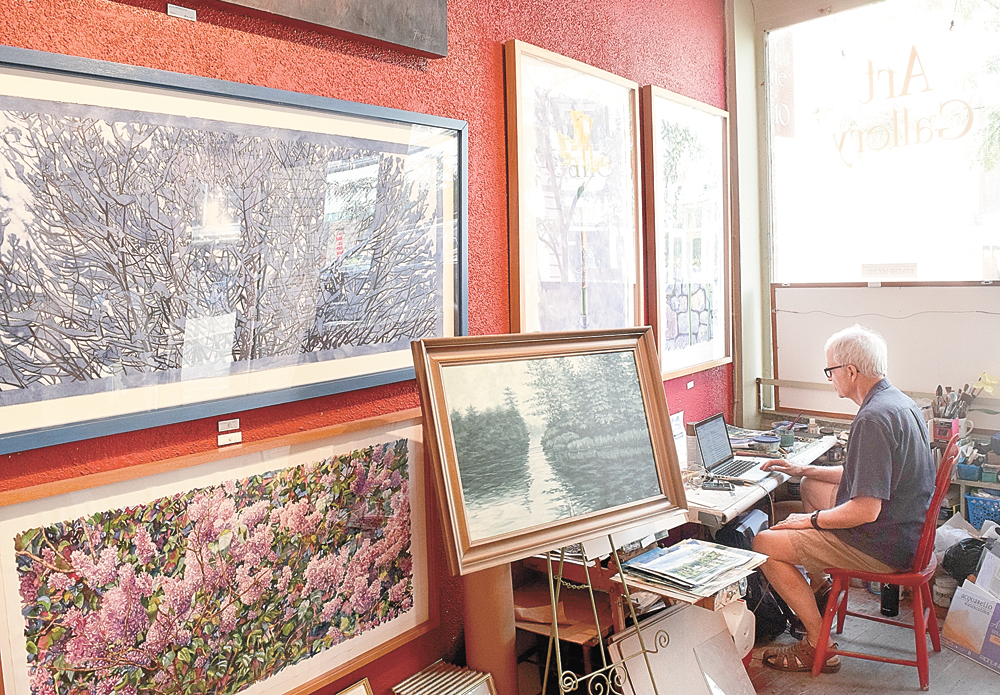 SARANAC LAKE — This village is known for its recreation, proximity to nature and quirkiness — “Decidedly Different” is its official marketing motto — and also for its abundance of artists. One day it may be home to more full-time artists.

To understand the current layout of the arts infrastructure here, one must know the name Tim Fortune. Fortune is from the village but was gone for several decades, studying and painting. In 1988 he moved back to Saranac Lake and worked many part-time jobs, including at North Country Community College, Clinton Community College and in the prison system. At first he didn’t consider opening an art gallery.

One day his landlord approached him, saying the T-shirt store below his apartment was unused and wondering if he wanted he could open an art gallery in the space.

“It was a good offer I couldn’t refuse,” Fortune said.

Twenty-five years later, Fortune is no longer the sole gallery in town. Along with his Small Fortune Studio, there is the Adirondack Artists Guild, BluSeed Studios, NorthWind Fine Arts and others. Each is comprised of artists who almost always work part-time or are retired. Some of these galleries are run by a single person — like Fortune’s studio — but most are comprised of several artists working together, as it can be easier to do. 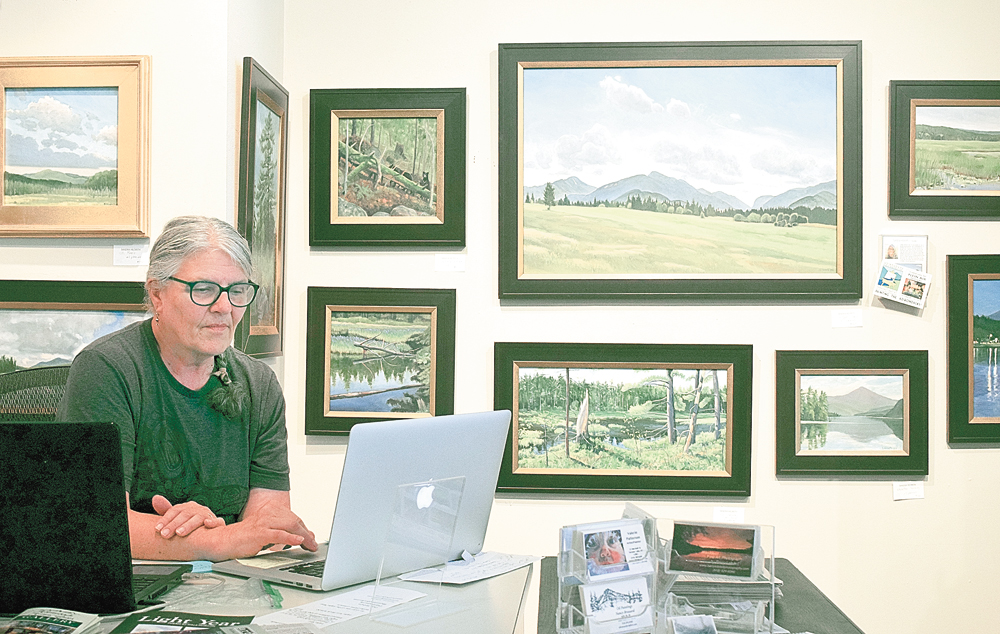 Sandra Hildreth, of the Adirondack Artists Guild, sits in front of her featured artwork on the wall behind her. Guilds like these help promote local artists. (Enterprise photo — Kevin Shea)

Fortune helped start the second-longest-running gallery that is still operational: the Adirondack Artists Guild. When it first opened, it was in what is now Origin Coffee. Mark Kurtz, a local photographer, said five artists, including himself, were part of the guild. However, he added that you couldn’t leave out Fortune, so there were really six.

“He saw the potential of artists working together as a collective,” Kurtz said.

Fortune later helped start the Art Walks, which combined local business and artists to increase foot traffic and help create an environment for artists to meet with locals, customers and tourists.

“There’s something about having a show or opening a gallery that makes you very productive,” Fortune said. “It makes you wonder what you were doing before.”

Shared galleries have been a useful medium to bring in customers to multiple artists all in one space. Repeat customers of one artist could return to the same gallery and then notice another they had never seen or noticed before.

Kurtz has a studio just above the current Adirondack Artists Guild. He said being on the second floor cuts down on foot traffic. Having rejoined the guild and become a part of the gallery for the past year has helped. Beside his work downstairs is a sign telling those who enjoy it to come upstairs to see more.

Kurtz started with the Adirondack Artists Guild when it first began but later left. One year ago, he was offered a free month in its gallery until it found someone to replace an artist who had just left. He asked about what it would take to be a part of the guild, found it to be fair and asked to join.

For those coming into the world of artists, the fear of being destitute is so strong that many prepare themselves for a slow start. Everyone has a part-time job or another source of income, such as retirement. Local artist and member of the Adirondack Artists Guild Sandra Hildreth, like many other artists in the area, is retired. She was a teacher.

“Most everybody else is retired, so they have a retired income or they have another income,” she said.

The preparation, however, can be freeing. Preparing for the worst and then receiving financial success can be a morale booster. But most don’t survive solely through their artwork, even if they’ve been doing it for a long time. Kurtz sells many of his works, but he also does commercial photography. He said he couldn’t make a living off selling his artwork.

This has an added benefit, however. Quite often, becoming an artist full-time requires bending one’s artistic desires to fit the need of the customer. But without that pressure to sell to survive, it makes it easier to paint, write or sketch whatever one wants.

The artist’s life isn’t as chaotic as some might believe. Fortune said he was pleasantly surprised with the sales he made when he first opened the Small Fortune Studio. The income isn’t consistent, however, and learning how to budget one’s expenses is important; otherwise bankruptcy and the closing of one’s studio can be nearby.

One cause of good years and bad years for artists is the overall economy. For example, sales dropped in 2008 after the housing crisis, Fortune said. In the past 13 years, the lowest attendance in the Artists Guild Gallery was in 2008, when around 4,900 people came through its doors.

“It has come back, but it hasn’t come back to its previous level,” Fortune said.

Hesitancy has since crept into the buyers’ shopping habits, according to Fortune.

“I think the psychology of purchasing anything these days is they pull back from purchases that aren’t necessary,” Fortune said. “Also, a lot of people don’t have a lot of extra income.”

He said he was happy and lucky to be married to someone with a steady income. Consistency, he said, is valuable and uncommon for artists.

But the community is stronger now, and Fortune and Hildreth believe it can be better for artists, too.

Hildreth is another figure who has helped bolster Saranac Lake as an arts community. Eleven years ago, she helped bring another program to the arts community: the Adirondack Plein Air Festival. This year, 50 artists came and painted Saranac Lake, Paul Smiths and other areas of the Adirondacks. It was a slow start, but now several of the 300 to 400 paintings done that week are sold, with several customers buying over $1,000 worth of artwork.

Hildreth said the arts are important to the village. It helps bring in tourists and money.

“It really is an economic driver,” she said.

She hopes that the Regional Office of Sustainable Tourism promotes the village more as a place of art. She said ROOST’s marketing focuses too much on recreation, which she agrees is important, but those who come want something to do after they paddle and hike. Here you can stroll through art galleries, amid other local businesses. It also is great exposure for artists.

“People have to find out about you to sell stuff,” she said.

The art you paint is also crucial. Many artists have found pieces of the Adirondacks to be their best-selling type of work, usually. Kurtz said he had one year when he sold as many pieces where New York City was the subject as he did pieces of the Adirondacks. He described it as a fluke, however, and said most people want to bring home a piece of the park and Saranac Lake to remember. Many of these customers are tourists, but not all.

Fortune said in the beginning, a large portion of his customer base was locals. Fifteen years ago, his wife did a study to see what percentage of his customers were local and what percentage were tourists. He said at the time, approximately half of those who left his gallery with a painting were locals. He believes that number has dipped, however. Perhaps they have finally run out of wall space, he said with a laugh.

“Locals still buy, and they’re an important part of my business,” he said. “Second home owners are important as well.”

Fortune said being an artist does not mean solely painting and selling. Art requires absorbing your surroundings and thinking about what you like to paint.

“Never stop thinking about your art,” he said.

Fortune said burgeoning artists participate in shows, sell locally and to people they know, and develop a thick skin. He added that every artist has to discover the balance between selling and being creative.

“How do you join the marketplace and keep your creativity? That’s a balancing act that everyone has to work with,” Fortune said.