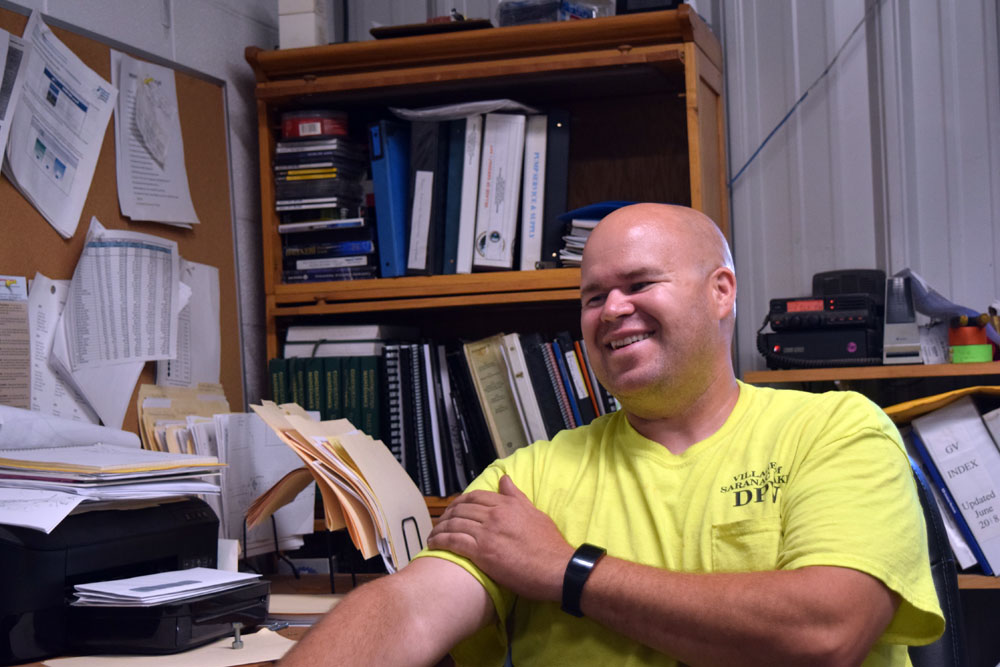 SARANAC LAKE — His first job with the village started just before his 15th birthday. It was a small start working on Mount Pisgah Ski Area, but it’s led to a position once held by his father, the Department of Public Works superintendent.

“The old man came into my room and said, ‘You’re not sitting around all Christmas break,'” Dustin said.

Dustin’s father, Robert, knew somebody who worked at the mountain. Dustin was hired to work as a lift attendant. He later learned how to make snow and do maintenance on the old equipment, as it often broke down.

A father telling his child he has to spend his vacation working is sometimes met unfavorably, but when Dustin was asked if it took him time to warm up to the idea of working, he shook his head. No, he said, he liked the job.

A job at 15 rarely sets one on the path that will take them through life, but for Dustin it led to summer work with the village, more winters with the crew at Mount Pisgah and eventually more work with the village when a semester at North Country Community College didn’t pan out.

It wasn’t forced. Robert made him work, but the job he ended up with was up to Dustin.

“I think he was happy and would be happy to have seen me succeed,” Dustin said.

The nature of Martins, apparently, is to work with their hands, work hard and eventually be a superintendent or a supervisor. Dustin’s grandfather was a highway supervisor for the village.

Dustin said the job has its ups and downs; There are late nights, which he expected. He remembers when his father would sometimes miss Christmas because he had to pull long shifts. It’s not something he likes, especially with his own family waiting at home for him, but he sees the value of the work that he does. He said there was a time he had thought of leaving Saranac Lake, but he’s glad he never did.

Dustin always had an affinity for machines and using his hands. He likes fixing things and working on cars; he can pull them apart and put them back together. Before his job on Mount Pisgah he had worked around the house, helping his father.

The job at Mount Pisgah was the first time he made money from his labor, but even though he liked the work, even in the North Country cold (he said he loves the winters up here), it never really clicked that this was something he could do for a living.

He tried for a semester to get a degree in criminal justice to work on becoming a police officer, but it didn’t stick. School wasn’t his strength. He eventually worked at the wastewater treatment plant for three years and then went to work on the water and sewer lines crew for around four years. Then he worked as the water supervisor, for around eight years, up until a few weeks ago when he was hired as the superintendent for the whole DPW.

Dustin said he’s enjoyed the work he’s done. He particularly enjoyed “getting in the trenches with the guys” and getting his hands dirty. Working as a superintendent takes some of that away from him. A lot of his time consists of planning, meetings and paperwork. He works long nights but he said he enjoys it and especially enjoys those he works with. He said they’re like one big dysfunctional family. Much of the crew is young. Some of them he is still getting to know.

Dustin said his crew has already completed a lot of work on Olive Street, a main thoroughfare to the high school where major work has been postponed. They’ve finished putting in a water main and it just needs to be checked. Next they’ll install a new sewer main and get it repaved. Potentially they could work on another project, but he’s not sure how much time they’ll have left.

The crew will also do some work on Old Lake Colby Road and Duprey Street. Dustin said he’s heard little in the way of oncoming bad weather, but he’s not sure. Things could change. He hopes winter doesn’t show until December.

(Correction: An earlier version of this article incorrectly stated the age of Dustin Martin’s son.)