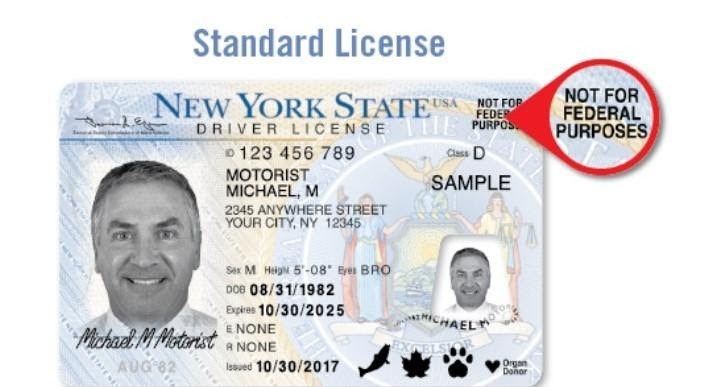 A standard New York driver’s license, like those that will be given to residents whose U.S. immigration status is not legal, says “not for federal purposes” on the top right. (Provided image — New York State Department of Motor Vehicles)

Essex County officials are considering whether to join other counties throughout the state in opposing the so-called “Green Light Law,” a controversial measure that will let people who immigrated here illegally apply for New York driver’s licenses.

The state Legislature passed the Green Light bill in June. Gov. Andrew Cuomo signed the bill into law shortly afterward, prompting immediate opposition from county clerks across the state. Some of them said at the time they would challenge the law in court and refuse to issue the licenses when the law takes effect in December.

At that time, the documents required to obtain a license will be expanded to include foreign documents, such as passports and foreign driver’s licenses. Some county clerks say their offices aren’t equipped to verify those.

Proponents of the law, like state Assembly Speaker Carl Heastie, D-Bronx, have said the law makes the state protect those who have immigrated here illegally from federal Immigration and Customs Enforcement. Heastie said in a statement last month that unless there’s a court order or a warrant, the law prohibits the state Department of Motor Vehicles from sharing data, such as photos, with any local, state or federal agency that primarily enforces immigration laws.

Saratoga County Clerk Craig Hayner said in a statement that the Green Light Law “disregards history and case law, attempting to rewrite the law in the interest of a few at the expense of many.” As examples, Hayner cited a portion of the law which allows an option to refuse to provide a social security number; which requires that the driver’s licenses issued to those who immigrated here illegally be nearly identical to those issued to citizens; and which requires that the DMV commissioner to notify, within three days, anyone whose records are sought from immigration enforcement agencies. He also contends the law forces DMV employees to become experts on identifying foreign documents, “placing the sole responsibility on DMV clerks to ensure people are who they claim to be and to ferret out fraudulent documents.”

Multiple county governments have passed resolutions opposing the law, which is now the subject of at least three lawsuits.

On Aug. 6, the Republican-led Niagara County Legislature voted to start the process of filing a lawsuit against the state over the Green Light Law, according to the Buffalo News. Lawmakers there said allowing those who immigrated here illegally to obtain drivers licenses would open up the possibility of those who enter the country illegally voting in elections. Some state lawmakers, such as Assemblyman Dan Stec, R-Queensbury, have raised the same concern.

Clerks in Erie and Rensselaer counties have also filed lawsuits to either overturn the law or temporarily halt the law from being enacted.

Earlier this month, state Attorney General Letitia James moved to bring the Rensselaer case to the western district court, which could be a precursor to consolidating the challenges, according to the Albany Times Union newspaper.

Essex County Clerk Joseph Provoncha briefed the Essex County Board of Supervisors on those lawsuits during the board’s Ways and Means Committee meeting on Monday.

Provoncha said the lawsuits all have a common thread: They argue that the new state law doesn’t adhere with federal policies on immigration.

“They touch on the illegality of the law relative to federal laws,” he said. “These (state) laws are not in concert with them.”

Provoncha said the county’s attorney, Daniel Manning, is now reviewing the lawsuits. The county Board of Supervisors is expected to weigh in at a later date on whether they believe Essex County should oppose the law, too.

Provoncha has been vocal about his opposition to the Green Light Law, going so far as to write a letter to President Donald Trump asking that he direct the U.S. Department of Justice to review the law to determine whether it adheres to federal law.

He suspects it doesn’t.

He also said the law could burden county clerks’ offices with DMV outposts because many aren’t equipped to effectively translate documents required for immigrants to apply for the licenses.

Provoncha’s opponent in the November election, independent candidate Kari Ratliff, is currently working as a supervisor in the county’s DMV office. She said she has “great empathy” for those who are entering the country fleeing “deplorable situations” in other countries. She also said she understands that those who enter the country illegally and came to the North Country are met with unique challenges.

But she said she wants to see everyone entering this country go through the process legally, and parts of the Green Light Law make her uncomfortable as someone who works in a DMV office, like the lack of a need for a U.S. birth certificate and other documentation that would normally be required.

Ratliff said Wednesday she hadn’t been aware the Green Light Law had been passed and had believed it was still unclear when, and if, it would go through.

If elected, Ratliff said she would uphold the law.

“At the end of the day, I’m here to uphold the procedures and laws put in place by the state and the commissioner of the Department of Motor Vehicles,” she said. “If that’s what I need to do, I’m going to do it.”

When county clerks are elected, they take two oaths of office: one to uphold the federal Constitution and another to uphold the state Constitution. Franklin County Clerk Kip Cassavaw, a Democrat, has said implementing the Green Light Law will put him at odds with one of those oaths, but he stopped short of opposing the law. Cassavaw did not immediately respond for comment Wednesday. Nor did Clinton County Clerk John Zurlo, a Republican, who has also voiced concerns about the law.

Franklin County Legislature Chairman Donald Dabiew, R-District 5, said the legislature hasn’t yet discussed the possibility of joining any of the lawsuits, but it’s likely to come up at the legislature’s next meeting on Thursday, Sept. 5.

“We’re pretty much maxed out in those areas,” he said.

New York offered those who immigrated here illegally the option of applying for a driver’s license until 2001, when then-Gov. George Pataki signed an executive order requiring proof of immigration status with license applications. A few years later, Gov. Eliot Spitzer attempted to reverse that change by executive order, but he met significant opposition from county clerks and rescinded the order a few months later.

“Legal attempts by the Erie County Clerk and others to block the Green Light Law, which will allow immigrants to obtain a New York driver’s license, are shortsighted and just plain wrong,” Heastie said in a statement. “The landmark legislation passed by the legislature this year and signed into law by Governor Cuomo promotes public safety, protects our state’s economy and ensures every New Yorker can integrate into their community and care for their family.

“Across the country, 12 states as well as Puerto Rico and the District of Columbia have similar laws on the books, and I am confident New York’s law will withstand any legal challenge.”

In a report released in February, the left-leaning Fiscal Policy Institute estimated that 265,000 undocumented immigrants statewide would apply for New York driver’s licenses. Between licenses and registrations, new cars, and an ensuing bump in sales and gas tax revenue, FPI projected the law change could bring a one-time revenue boost of $26 million and an increase of $57 million in revenue generation annually.