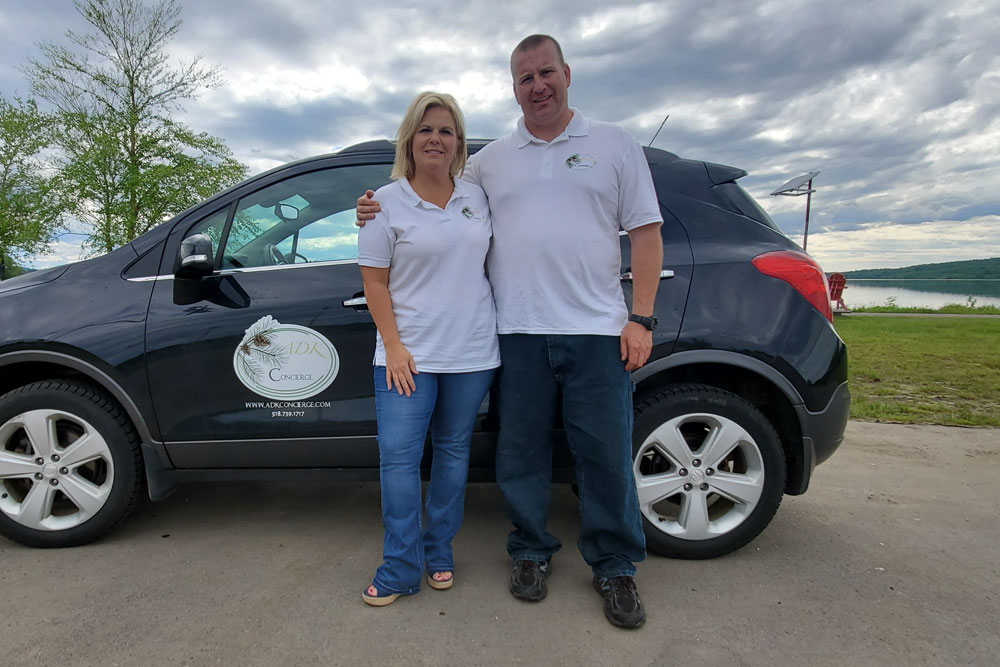 Barbara Denis, left, and Mike Vaillancourt are the co-owners of ADK Concierge, the only concierge-style company currently in the Tri-Lakes. (Provided photo — Trinity Vaillancourt)

TUPPER LAKE — A new cleaning service run by a local entrepreneur couple is offering a range of concierge amenities, but they are still waiting for large numbers of second-home owners to take them up on it.

When ADK Concierge co-owners Mike Vaillancourt and Barbara Denis started the company, they wanted to provide something different than most cleaning side businesses. They say they also wanted to not poach clients from the people who do daily cleanings in town and to fill what they saw as a gap in services.

Vaillancourt is a village police officer and runs two other businesses, Treebusters (an arborist service) and Sootbusters (chimney cleaning and repair), and Denis has a business background.

Denis said they got the idea for this new enterprise from spending time in the Caribbean and seeing concierge services there, taking care of customers’ shopping, transportation and reservations.

Vaillancourt and Denis started opening houses a couple months ago and have been mostly doing cleaning so far while the other concierge aspects get off the ground.

Denis said second-home owners coming to their houses in the Adirondacks don’t want to do busywork on their vacation; they want to swim, hike and paddle, to enjoy the outdoors. For a higher price, they can get a green cleaning service as well as the concierge services.

“Our whole thing is, we can’t beat people on price because regardless of what we charge, you can always find somebody for less,” Vaillancourt said.

Vaillancourt said they have not had many clients take them up on the concierge services, however.

“We haven’t been doing as much as I would like, but I guess more than I expected,” Vaillancourt said.

They are taking the business off the ground slowly. After they put up their website in January, they started getting calls and started taking jobs.

On their first job it was just the two of them, their daughter, their niece and another friend. They hope to employ 15 to 20 people eventually. They said it takes a four-person team for one house, and they want to get two teams out there every day.

Vaillancourt, a village police officer, said they will background check all their potential employees.

“You’re going into someone’s home,” Denis said. “People are giving you the keys to their house.”

They are also insured for injuries and property loss. Vaillancourt said this makes them a bit more expensive, but that it is an added protection.

The two said they have been getting calls regularly from Star Lake, Cranberry Lake and in town. They said they are looking for more employees, especially students and teachers who need summer work.