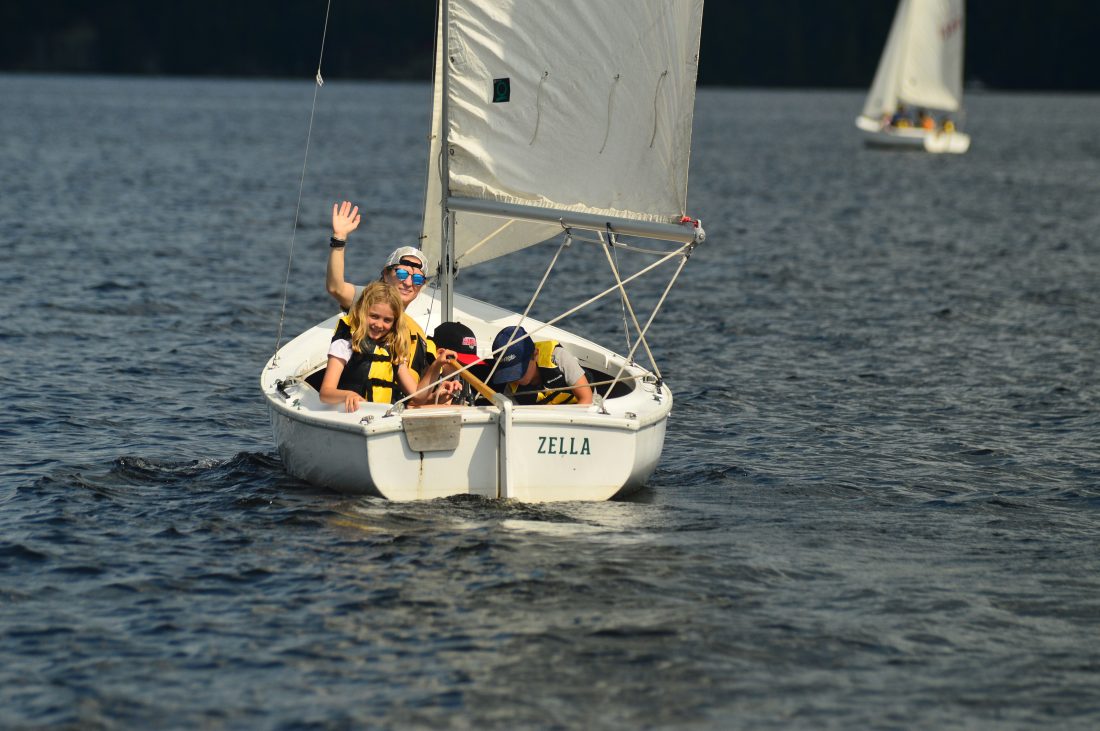 Eagle Island campers, and an instructor wave from a sailboat the kids learned to maneuver while at camp this week. (Enterprise photo — Aaron Cerbone)

The former Girl Scout camp reopened this summer to campers for the first time in 11 years. The Girl Scouts operated the 116-year-old island camp until 2008. After it shut the camp down, the Friends of Eagle Island Inc., which was created to help the Girl Scouts reopen the camp. When that didn’t work, it raised the $2.45 million needed to purchase the island in 2015 and began work to get it back up and running.

Over the Memorial Day weekend, 10 volunteers camped on the island to put the finishing touches on, and the first batch of campers arrived July 22.

On Wednesday, a group of day campers entering fourth, fifth and sixth grade learned to sail, worked on their swimming skills and invented games with their new friends on the 30-acre island, like the Girl Scouts did for years. 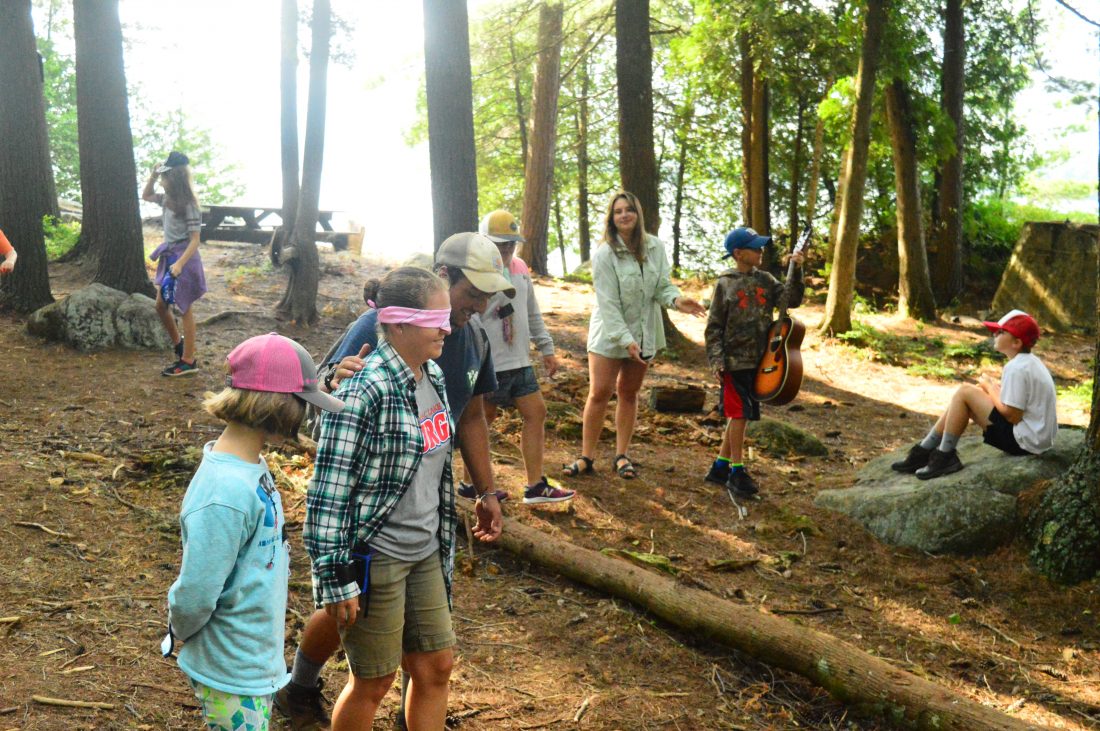 She said she put in around 10 months of work planning for these two weeks of camp, and when the second week wraps up on Friday, she will start planning for next year’s, which she hopes will be even bigger.

The day started with the camp staff, made up of 19 to 24 year olds, giving their morning report, which ended with a rousing rendition “The Morning Report,” a song written by Elton John for “The Lion King.”

They instructed each group, which are named after snacks, what their schedule for the day is.

The kids are on the island from 9 a.m. to 4 p.m. every day, as the camp is not yet equipped for night camping. The staff, who hail from states all over the East Coast, are mostly staying at Camp Cherokee, right near the boat launch to Eagle Island, except for one staff member who boats home to her house on the other end of the lake.

The group, who would start their day sailing, trotted off down the trail singing “All-Star” by Smash Mouth. The remaining group started their nature-focused session. 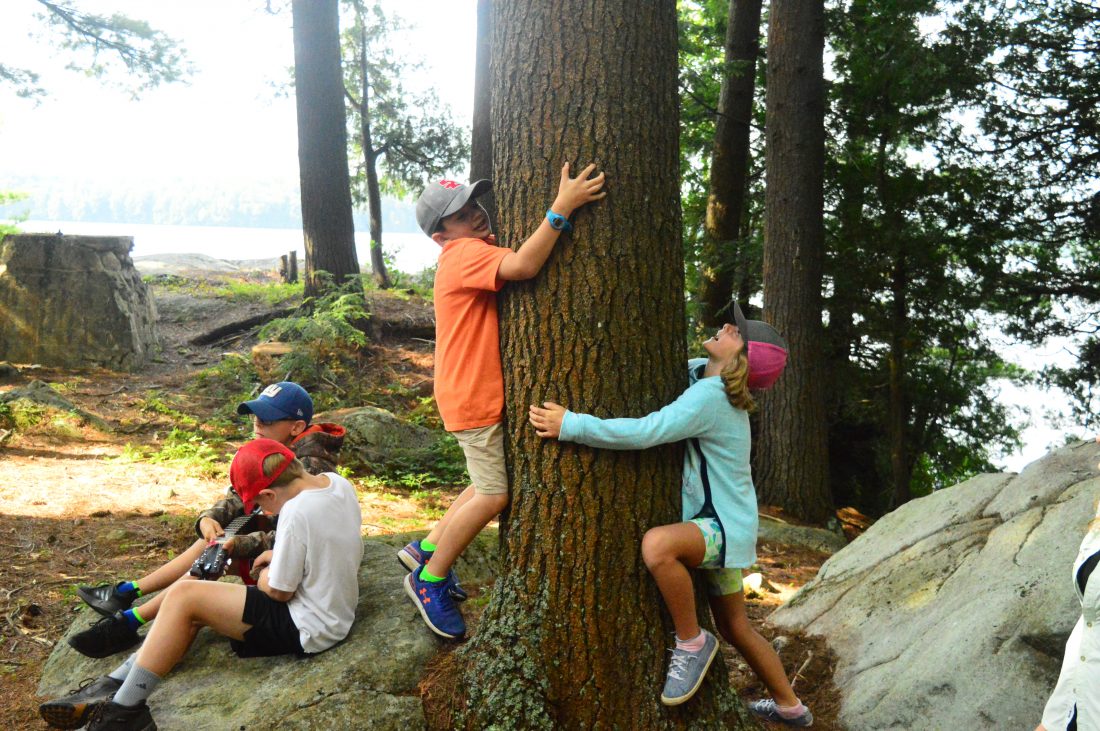 Kids play “Hug a Tree” on Eagle Island. The camp opened up for the first time in years this summer and campers have once again been learning, playing and building friendships on the island. (Enterprise photo — Aaron Cerbone)

Kids spend specific time getting instruction about the natural world, learning to tie sailing knots and working on swimming skills.

Dearden said one boy who was behind the rest of the group in his swimming strokes the first week, worked hard, came back second week and moved up a swim level, getting to swim in the deep end.

On the wooded island peninsula, campers played “Hug a Tree,” in which one player would blindfold the other and lead them to a tree. Without peeking, they would have to hug the tree, get to know its bark, surroundings and size. They would then be led back to the start and after being spun around would remove their blindfold and search for their tree.

The kids had a lot of favorite games. For one camper, it was Four Square — there were two courts on the island — for others it was Werewolf, a hidden identity game that attracted a large crowd during Tuesday’s lightning storm.

Dearden said thunder delayed their trip back to the mainland by an hour Tuesday night, but that campers did not even notice and kept playing their favorite games through the storm.

For some, their favorite games were the ones they made up. Dearden said after several campers talked about wanting to play Fortnite, a popular video game, camp staff developed a sort of live-action Fortnite.

“There’s a lot of costumes involved, running through the woods and hiding,” Dearden said. “Pine cones are point values or something.”

Out on the lake, the boating crew caught the light wind blowing over the water and practiced tacking across the smooth waves with four sailing-experienced staff, all Eagle Island alumni. Campers dipped their hands in the water, guided the rudders and kept their heads low below the boom.

Dearden said lots of kids from Lake Placid, Bloomingdale and Rainbow Lake attended, with some from Saranac Lake, two from Tupper Lake and one from Long Lake.

She said a survey was sent out at the end of week and they all came back with every camper saying they want to come back next year. She hopes the island will be able to support overnight camping next year. This would be a girls-only overnight camp, but she hopes to eventually offer a co-ed overnight camp.

Eagle Island Inc. Executive Director Paula Michelsen said the plan is to expand the camp each year, becoming an all-day camp in 2020 and opening up its 37 platform tents the next year. The island can house up to 140 campers.

The camp will be hosting a free open island day on Aug. 17 and people wanting to tour the island can register on the camp’s website at http://eagleisland.org/new-events/2019/8/17/open-island-day.