Agreement doesn’t include clawback to guarantee job retention, since trustees trust state will handle that through another grant

This composite image shows what the Saranac Waterfront Lodge would look like from across Lake Flower when completed. (Image provided) 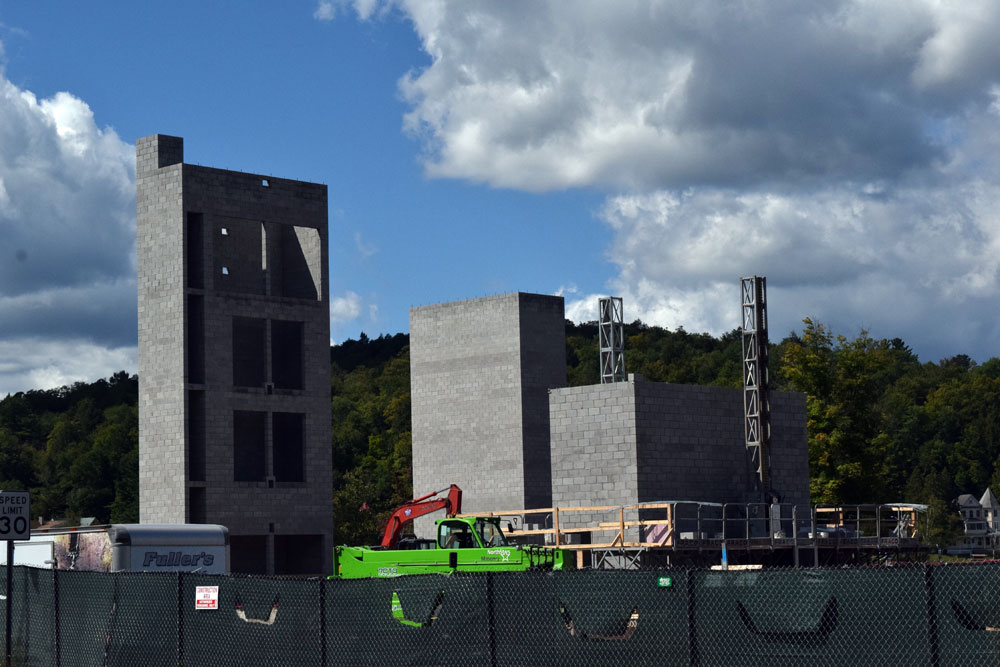 SARANAC LAKE — The Saranac Lake Village Board of Trustees has decided to accept a $750,000 Community Development Block Grant for a Lake Flower resort project without adding a clause to take back the federal money if the resort doesn’t produce and retain the required number of jobs.

The village trustees who approved it say they believe New York state will guarantee the jobs through a separate grant.

At a special meeting on Thursday, the village board decided to vote on the matter, which had been tabled since Monday night’s board meeting. Trustees Melinda Little and Paul Van Cott and Mayor Clyde Rabideau voted to approve the grant as is, without adding a clawback provision. Trustee Rich Shapiro voted no. Trustee Patrick Murphy recused himself. He said he did so because one the project’s managing partner, Jacob Wright, is on the board of the Saranac Lake Area Chamber of Commerce, for which Murphy works as director.

“I’m opposed to it as it stands,” Shapiro said of the grant agreement. “I think there should be a clawback.”

This composite image shows what the Saranac Waterfront Lodge would look like from across Lake Flower when completed. (Image provided)

Community Development Block Grants are federal money administered through the state, given to local governments to disburse.

The village applied for this $750,000 grant for the resort at the beginning of this year and was awarded it. The discussion has been ongoing for months, as terms of the agreement could not be met between the resort and the village.

The grant is to purchase the resort’s furniture, fixtures and equipment, as well as to reward the resort for a certain number of jobs that are created; $15,000 of grant money would be reimbursed by the village for every full-time equivalent job created, up to 50 FTEs.

The village is able to earn $16,000 for overseeing that the jobs are created, according to Jamie Konkoski, village community development director.

The village had debated imposing a clawback in the agreement, by which the grant money could be taken back if the resort does not keep those jobs for a certain amount of time. The resort pushed back at this, and the village decided to remove the clause at a recent work session, according to Shapiro.

“The resort objected that it’s too much work to do this, etcetera, etcetera, etcetera,” Shapiro said. “With modern payroll systems, I mean, that’s easy to do a quarter- or semi-annual report of how many people we have working. … In my mind that’s an easy one.”

“The state CDBG grant requires them to create the jobs,” Shapiro said. “It doesn’t say anything about retaining the jobs, which bothers me.”

One reason the village board agreed to allow the grant without a clawback is that the resort has been another grant lined up for $2 million from New York’s Empire State Development, pledged in 2013 through the Regional Economic Development Council process. The money will be awarded only after the resort is up and running and has met all of its obligations, including those for job creation.

“Jamie’s assured everybody that that’s the way it is,” Shapiro said. “I asked Jamie (on Tuesday), ‘Can you send me a copy of that grant so I can read it and just assure myself that at least some of it is met, so it’s not somebody else’s interpretation?’ … She wrote back that she’d never seen it, that she was told this by the state administrator.” Konkoski confirmed on Friday that she has not seen the agreement.

In fact, they could not have seen the agreement because it does not yet exist. ESD spokesman Adam Ostrowski said the agreement will not be drawn up until the resort project progresses to a point at which the grant money can be disbursed.

He said the ESD agreement, when written, will include “provisions for recapturing state funds.”

Board members at Thursday’s special meeting said they believe the state will hold the resort to retaining a certain number of workers.

“The actual tabling occurred, I was deferring to (Little) about that,” Van Cott said, “because she wanted to get more information about it, and she did in fact have a conversation with our community development director, who affirmed for her that the state has its clawback provision.”

Shapiro, however, said, “I’m uncomfortable with the fact that I can’t see a document that’s guaranteeing what I’m asking to have done.”

Van Cott said he thought it important to let the state impose its restrictions.

“My own position remains, you have the state departments, whatever they are, you have requirements that come along with this grant program, whatever they are, and the village ought not to be adding to the burden on developers,” he said. “It’s just unnecessary, we should–we need to trust our state representatives and state agencies to make sure that the applicants comply with those responsibilities that they have to the state.”

Officials for the Saranac Waterfront Lodge were not at the meeting and could not immediately be reached for comment.

Lee Pillsbury of Maryland and Mark Pacala of Washington, D.C., own Saranac Lake Resort Owner LLC, the company that owns this project. Skyward Hospitality will manage the resort. It is expected to have about 90 hotel rooms, plus restaurants and conference space.

(Correction: This article has been corrected to reflect that no grant agreement yet exists between ESD and the resort; the project has to progress further before such an agreement is drawn up.)