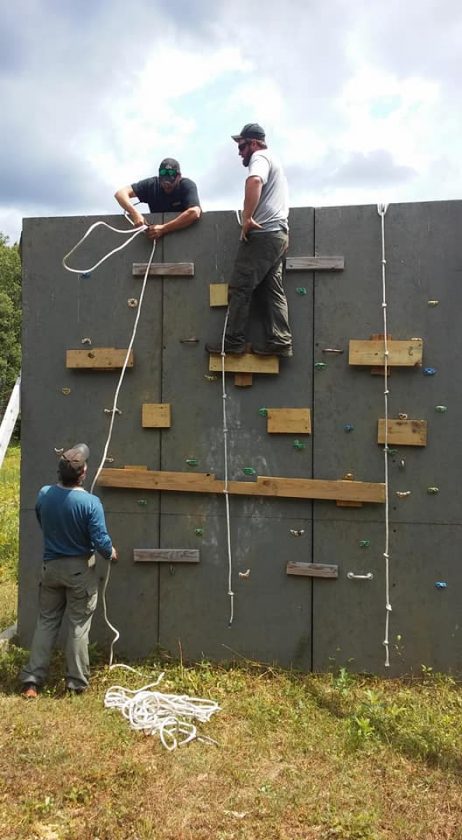 People set up one of the obstacle walls that runners will have to scale in Saturday’s Warrior Run. (Provided photo — Krit LaMere)

TUPPER LAKE — The obstacles for the Saturday’s Warrior Run are set up, nearly 100 people are already registered to run the race, and organizers are hoping the weather brings some rain to muddy up the track.

While rain is the bane of most events’ existence, it is what the Warrior Run thrives on. This year, it is once again being hosted at Raquette River Brewing after a one-year hiatus.

Krit LaMere, who organizes and sets up obstacles — including five new ones — with the Bencze family and several other volunteers, said she believes this year’s course is one of best courses yet.

“It just looks like it’ll be fun,” LaMere said. “We got a couple new trails cut, a little more swamp run that they got to go through.”

The race, put on by the Tupper Lake Chamber of Commerce, is a 5K, and this year organizers added an 8K route to offer a more extreme challenge with a bigger incline and rougher terrain, similar to the original races, which were held at Big Tupper Ski Area.

“Last time we did it at the brewery … some of the more ambitious runners wanted more, because the mountain was so hard with the incline,” LaMere said.

The brewery has also added some amenities for the runners.

“They constructed some showers so everybody can wash off, which will be good because one of the last things they have to go through is the swamp run,” LaMere said. “They’ll be coming to the finish pretty nasty.”

LaMere said there were 91 registrants signed up at noon Thursday. Race day registration starts at 9 a.m. and the race starts at noon.

Local rock band Hammer Lok will perform from 4 to 7 p.m.

LaMere said she can always use more volunteers and rain.

“I think it will be okay without it, but I wouldn’t mind a storm,” LaMere said.