Above is the location of the proposed Tupper Lake Crossroads Hotel on the corner of Park and Mill streets. (Enterprise photo — Aaron Cerbone)

Tupper Lake Crossroads Hotel developer Nancy Howard points to an old postcard with a building where the future hotel will stand on the corner of state Routes 3 and 30. (Enterprise photo — Aaron Cerbone)

TUPPER LAKE — The developers of the Tupper Lake Crossroads Hotel hosted a public meeting Tuesday to inform people of the progress of the long-discussed project and to ask for funding to meet a 45-day deadline.

The proposed location for the hotel is on the corner of Park and Mill Streets (state Routes 3 and 30).

Developers Betsy Lowe and Nancy Howard, along with employees from the architectural firm and hotel management companies, pitched a vision of a modest, boutique hotel focused on servicing the Tupper Lake community just as much as its guests.

Skyward Hospitality Chief Investment Officer Tim Barnhart, described the three-story, 45-room hotel as being “Goldilocks size,” not too small and not too large for Tupper Lake.

In December 2016, the Tupper Lake Crossroads Hotel was awarded $2 million during the sixth annual round of Gov. Andrew Cuomo’s Regional Economic Development Council competition. At the time, the estimated cost of the project was $10.2 million. 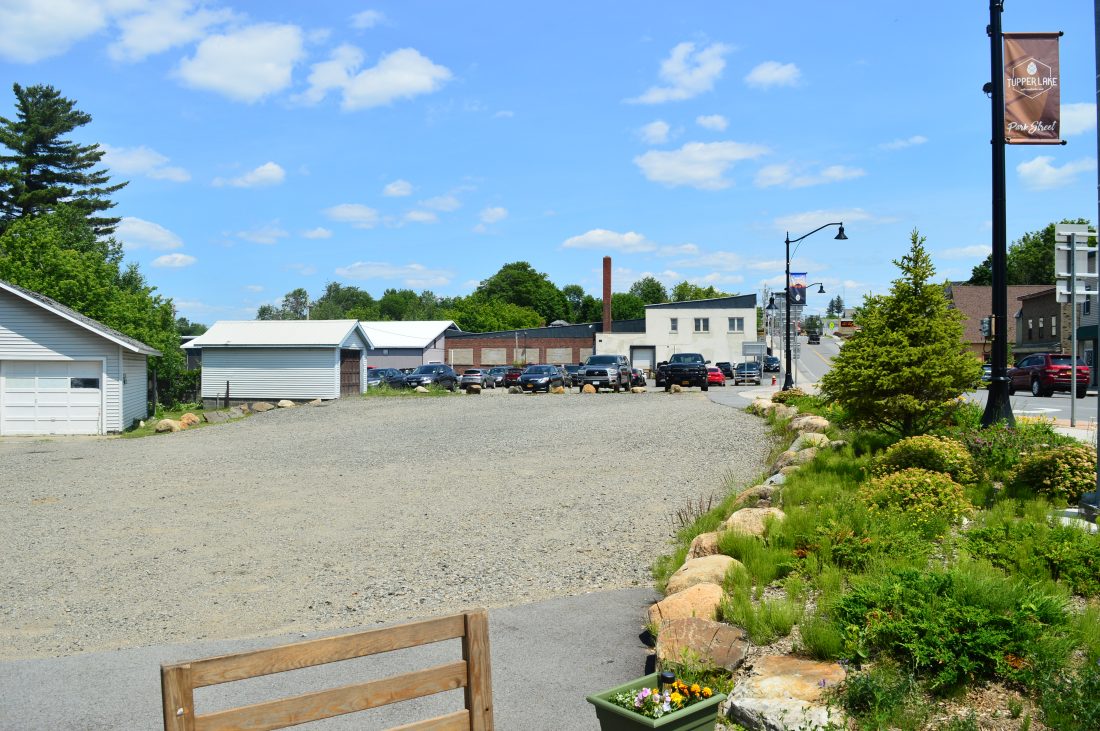 Above is the location of the proposed Tupper Lake Crossroads Hotel on the corner of Park and Mill streets. (Enterprise photo — Aaron Cerbone)

“The reason for the meeting … to do the pre-development it is going to cost $300,000,” said Jacob Wright, a developer from Skyward Hospitality. “Betsy and Nancy have raised a substantial amount of money to date, but to really kick off we’re going to need around $150,000.

“Frankly, and just to be direct, so that we can make people understand, if it doesn’t happen in the next 45 days, there is a very real danger that the project doesn’t happen.”

Wright did not elaborate later when asked about this, saying he did not have “authorization,” but Lowe explained that the state wants to see evidence the project is moving forward.

“We’ve had the $2 million grant in there. They want to see some significant progress. They aren’t very specific,” Lowe said. 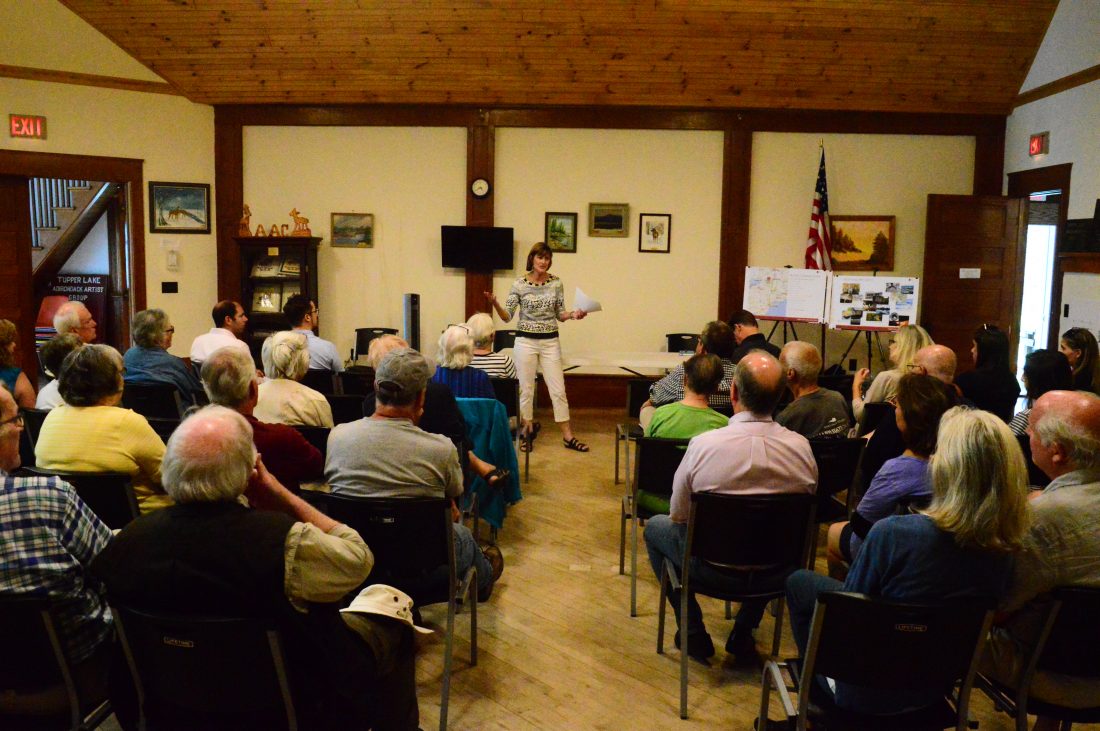 Lowe said the property caught their eye while they searched for a location for the Wild Center. Though it was too small for the museum, they envisioned a hotel there. They were busy with the Wild Center for a while and then the state Department of Transportation took the land by eminent domain to use it for parking while it renovated Park Street from 2015 to 2016.

While discussing the project with the DOT, Lowe said she was informed that an entrance on Park Street would be too disruptive to the traffic. Lowe and others purchased several more lots between Park and Lake streets in the following years to create a cut-through from Lake Street.

The developers own a total of seven properties on an over 1-acre plot of land situated between Park, Mill and Lake streets.

Wright said Skyward Hospitality is well-acquainted with zoning laws and Adirondack Park Agency hurdles, as the company is also behind the Saranac Lake Waterfront Resort on Lake Flower. 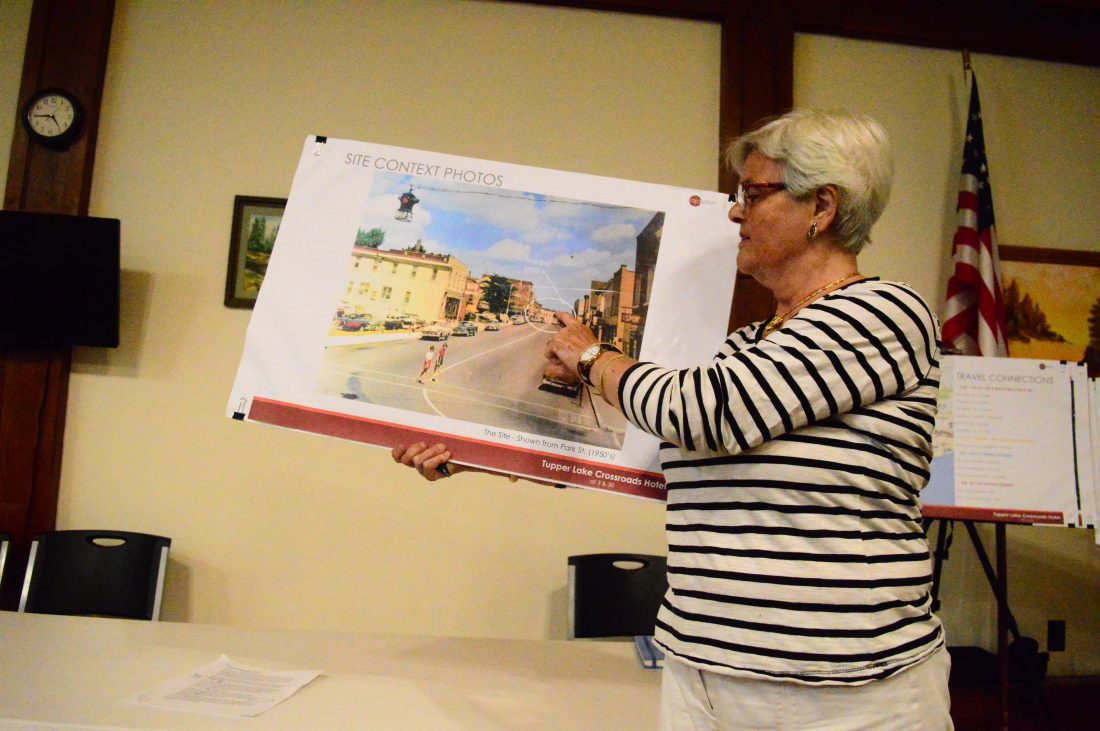 Tupper Lake Crossroads Hotel developer Nancy Howard points to an old postcard with a building where the future hotel will stand on the corner of state Routes 3 and 30. (Enterprise photo — Aaron Cerbone)

“Some people have said that the project has lagged, but if you really look at the period of time when they could actually start working on the project for real — when they were awarded the grants to today — it’s 23 months,” Wright said.

Andy Ellison, from the Glens Falls firm AJA Architecture and Planning, said the hotel is part of a downtown revitalization and added that, “variety of lodging … grows everything around it.”

“For full transparency, they’re not going to knock it out of the park and make millions of dollars. This is truly a project for the community,” Wright said.

Howard recalled hiring 100 Tupper Lake residents at the Wawbeek Inn and the hospitality they provided.

“We were unwittingly blessed because of two embedded, wholesome Tupper Lake people qualities,” Howard said. “One: a natural friendliness. Guests would confirm this time and again, returning to the village. Two: an excellent work ethic. Money cannot buy these traits.”

The property is the location of past neighboring businesses such as DiStefano’s Liquor Store and the 3&30 Lodge (Bob’s Steakhouse).

Lowe recalled a time when she was driving back from Lake Placid to her home in Long Lake and she got a flat tire right outside DiStefano’s Liquor Store. She said Mary DiStefano helped her, flagging cars down and assisting her in putting on new tire.

At the corner of Park and Mill streets was the Sunshine Store, which was razed in December 2003 and the debris removed in June 2004. DiStefano’s was in business until September 2006 and later torn down. And the 3&30 Lodge was destroyed by a fire in 1997.

Tupper Lake currently has nine hotels. Another hotel project on Demars Boulevard received a $2,195,000 REDC grant in December, with a total budget estimate of $10,975,000.