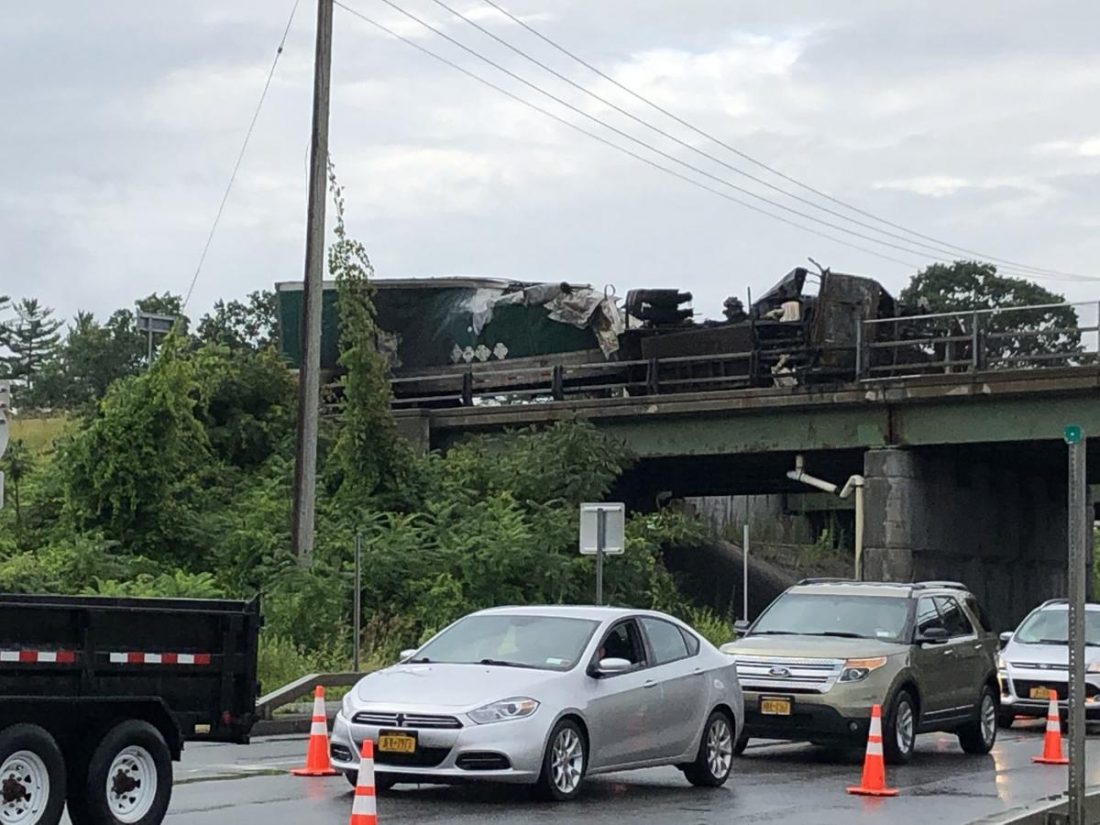 Charred remnants of a tractor-trailer sit on the Northway near Exit 18 Wednesday. Two trucks collided, and one driver died. (Provided photo — Don Lehman, The Post-Star)

QUEENSBURY — A truck driver was killed and all lanes of the northbound Northway between exits 17 and 19 closed by a crash involving two tractor-trailers early Wednesday.

Both trucks burst into fire after they collided near the Exit 18 overpass, and one driver was able to free himself and escape his cab while the other was not, officials said.

State Police said one of the trucks was stopped on the highway’s shoulder when it was hit by the other around 3:30 a.m. The driver of the stationary truck escaped but the other died at the scene. Their names were not immediately released, as police were working to identify the man who died.

The surviving driver suffered minor injuries and was treated at the scene by West Glens Falls Emergency Squad members.

West Glens Falls Fire Chief Jeff Dailey said firefighters arrived to find trucks ablaze, and there was no way to get close enough to the one where the driver was trapped to attempt a rescue.

“It was fully involved,” he said.

A West Glens Falls Fire Department tower truck was used to douse the flames from above. There were no hydrants close to the overpass, so tankers had to be brought in to supply water.

Both sides of the highway were initially closed, but the southbound lanes had reopened as of 5:45 a.m. The northbound lanes remained closed as of 8 a.m. and it was unclear when they would reopen.

Main Street was limited to alternating lanes at the Exit 18 overpass.

Heavy traffic was reported on Route 9 through Moreau and Glens Falls as drivers were re-routed.

It was initially unclear what prompted one truck to stop. No hazardous material spills were reported, as one truck was believed to be carrying bags of potting soil and the other groceries.

More details will be posted when they become available.