The sun is seen through a solar telescope at the Adirondack Sky Center’s first Sky Festival Sunday. (Photo provided) 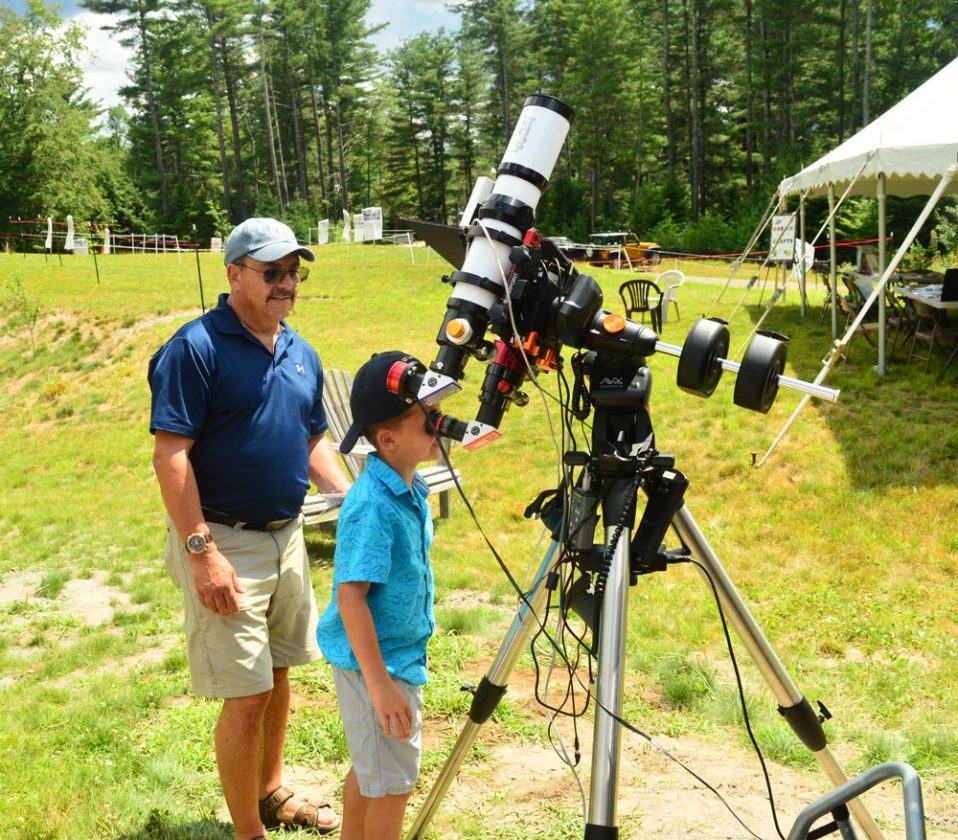 TUPPER LAKE — The Adirondack Sky Center held its first Sky Festival Sunday, with events around town drawing around 60 star enthusiasts from western New York, interested families from Little Wolf Beach and Tupper Lakers looking to learn more about the night sky they have a unique view of.

The event coincided with the 50-year anniversary of the first moon landing.

At the sky center’s Roll-Off Roof Observatory, kids ran around from exhibit to exhibit collecting factoids for a scavenger hunt they were on. Tim Connolly, an astrophotographer who specializes in solar photography, was taking pictures of the sun live at the event. As children looked through the telescope’s eyepiece, Connolly pointed out a prominence on the bottom side of the sun, which otherwise looked like a perfect, red circle.

The prominence was a sun flare, sending a plume of solar energy, multiple times the diameter of Jupiter, out into space. St. Lawrence University physics and astronomy professor and ASC board member Aileen O’Donoghue, who writes the “Wilderness Above” column in the Enterprise, said the sun has been very “quiet” recently.

A chart on a board nearby shows how solar activity rises and falls in an 11-year cycle. Right now the line is at about solar minimum. That means the polarity in the sun spots is in the process of flipping. 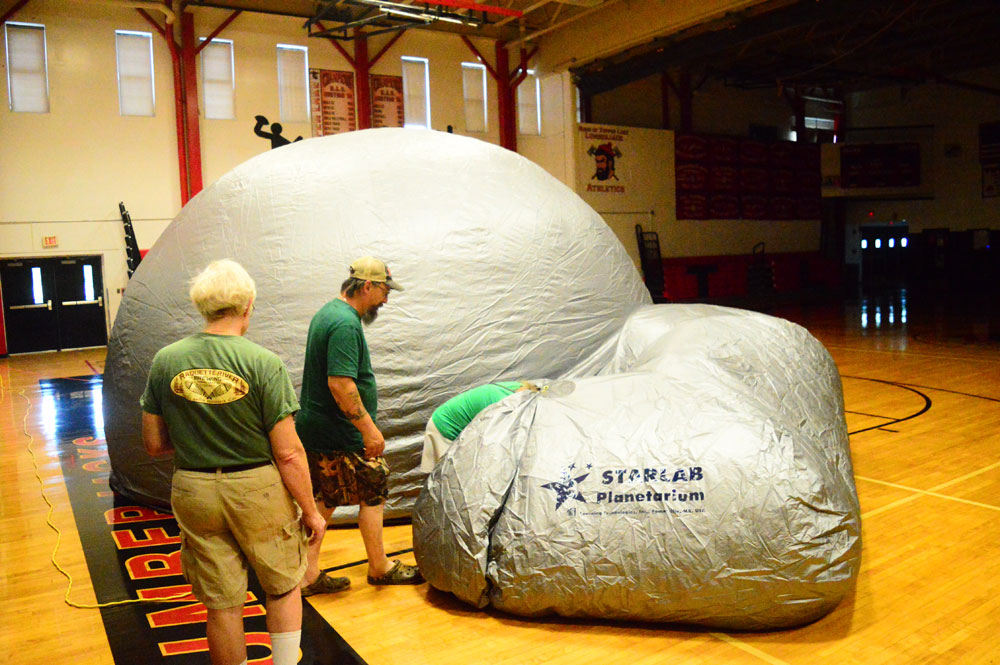 “Because the equator rotates faster than the poles, the sun’s magnetic field gets wrapped up, and so the magnetic field kind of bulges out,” O’Donoghue said.

The flipping of the polarities shoots out plumes, which O’Donoghue referred to as “magnetic hernias.”

Joshua Thomas, a Clarkson University physics and astronomy professor as well as an ASC board member, led adults though a guessing game on the distance between planets, the moon and Earth.

With ASC volunteer Anthony Ferraro holding a scale model of the earth, Thomas held an equally scaled tennis ball representing the moon and asked everyone to guess how far away he should stand. The crowd debated how far away he should stand, guessing incorrectly a couple of times before Thomas landed 28 feet away, the equivalent of the 230,000 miles between the earth and the moon.

Thomas then asked how far away they thought the International Space Station is from the earth. He got answers of a couple of feet away, a couple of inches away and further than the moon. He then put a pen on the globe and said it was only a quarter-inch away. 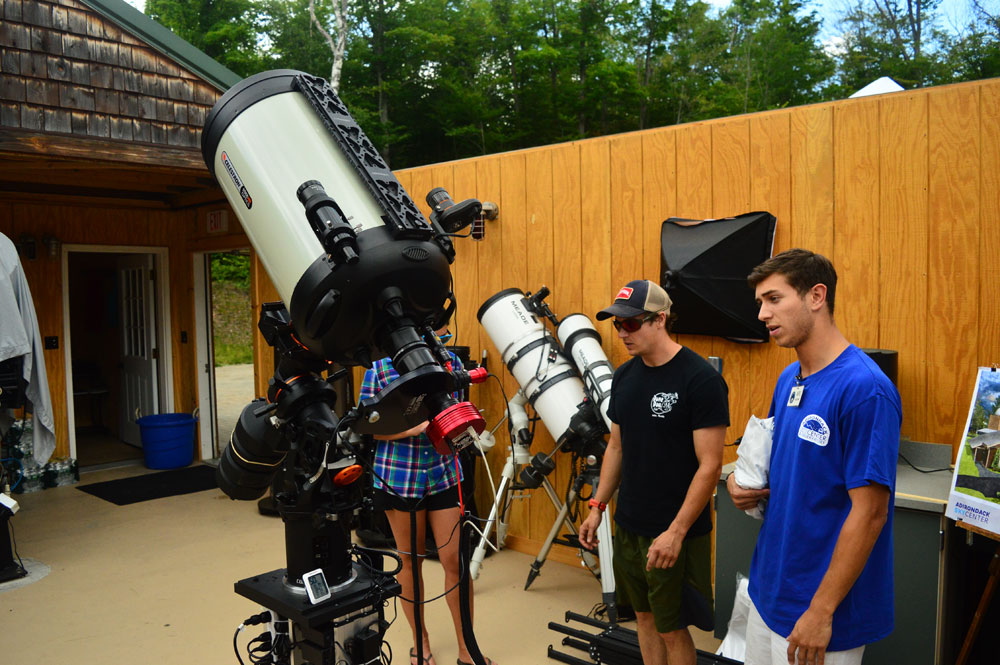 Over at the Wild Center, the nature museum booked speakers all weekend long. Retired NBC-5 meteorologist Gib Brown presented a talk on earthly weather on the giant Planet Adirondack globe at the museum.

“Gib has been playing with that big toy,” said Manager Kara Page, project manager of the ASC’s future Astro-Science Center.

Another big toy sat in the gymnasium at the middle-high school, an inflatable planetarium.

“Even if we don’t have clear skies tonight, you’ll see them here,” astronomer Bruce McClure said.

McClure donated the blow-up bubble and projector to the observatory after he ran it himself for years. The last time he did a showing with it in Tupper Lake was in 2012. 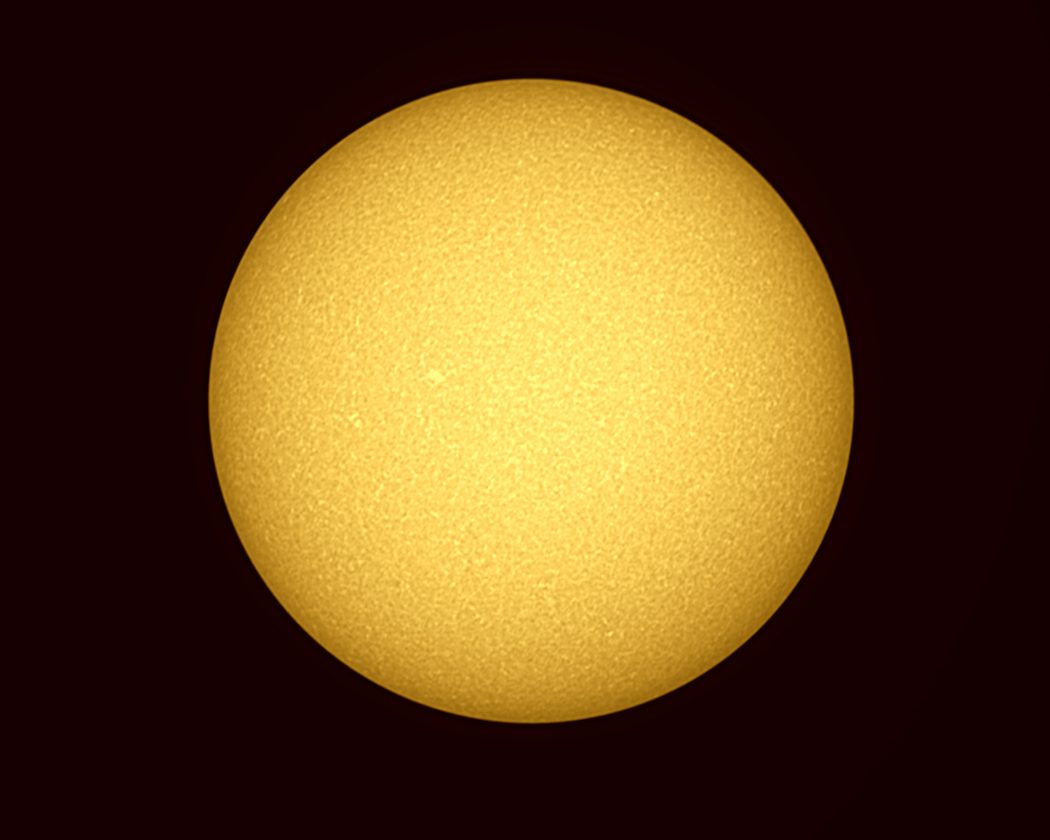 The sun is seen through a solar telescope at the Adirondack Sky Center's first Sky Festival Sunday. (Photo provided)

Everyone climbed through the tunnel into the cool, pitch-black main chamber and found seats on the floor. Just like stepping out into the night, they all waited for their eyes to adjust. As McClure explained how to navigate using the North Star, the spots of light projected on the domed roof became visible.

As he began to point out the constellations with a laser pointer, more dots of light came into focus on the ceiling. Even with a full view of the Milky Way, it was hard to see how a couple of lines between dots in the inky black could represent serpents, winged horses and people.

Though most the stars are technically in our home galaxy, the Milky Way, the band of light representing many clusters of stars is commonly referred to as the Milky Way. McClure said this is because the galaxy is shaped like a disk, so the densest loads of stars are seen by looking into the heart of it.

Afterward, a family visiting from Buffalo shared photos they took of planets the night before.

The inflatable planetarium offered a glimpse of what the Astro-Science Center will eventually host, a state-of-the-art planetarium with stadium seating and the latest projection technology.

Page said few planetariums have observatories, too. Because of light pollution they are rarely found in the same place. She said over 80% of our planet is affected by light pollution, but Tupper Lake, with its remote location and its village and town issuing “dark skies” ordinances, experiences that less than other places.

“One of the goals of the festival is to help people realize what a unique natural resource we have here,” Page said.

Page said the idea for the festival came around because people at the Sky Center want to keep the public informed on their Astro-Science Center museum project, which kicked off last year. Page said the observatory has been a sort of “hidden treasure” in Tupper Lake.

“I was trying to think of things that we could do to get our name a little bit more known among the general public,” Page said. “We would like the community — Tupper particularly but also Saranac Lake, Lake Placid, Long Lake — to embrace us and love what we do.”

Later in the day, Al Nagler talked at the Wild Center on how simulators helped Apollo 11 astronauts get to the moon. David Fadden from the Six Nations Indian Museum and Jeffrey Miller from St. Lawrence University told “Celestial Stories” from the Iroquois tribes as well as and Greek and Roman mythology in the school auditorium. And Night School played the music of the skies at the bandshell in Flanders Park.

The evening rounded out with stargazing at the observatory on Big Wolf Road, at the site of the future Astro-Science Museum.